Last night's most prominent orators at the Democratic National Convention made gay marriage a theme in their speeches, signifying the party's intent to take the lead on the issue in the run-up to Election Day.

The Democratic party added a gay-marriage plank to its platform in July, about three months after President Barack Obama declared his support for it in an interview with ABC News. 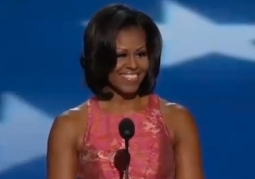 However, while Democrats' embrace of gay marriage as a key issue for the party may fire up parts of the base and help with fundraising, it's not likely to sway many swing voters in an election that 's squarely focused on economic issues. In other words, while more Democratic speakers will probably talk about gay marriage in the next two nights of the convention, you're still not likely to see TV ads focused on it in the next two months.

Last night's speakers invoked the issue using similar phrasing, referring to people's right to be with the person they love without ever using the word "gay," which signifies a degree of coordination in the crafting of their remarks.

Here are the relevant excerpts.

Michelle Obama: "If proud Americans can be who they are and boldly stand at the altar with who they love, then surely, surely we can give everyone in this country a fair chance at that great American Dream." Also: "Barack knows the American Dream because he's lived it ... and he wants everyone in this country to have that same opportunity, no matter who we are, or where we're from, or what we look like, or who we love."

San Antonio Mayor Juan Castro: "When it comes to letting people marry whomever they love, Mitt Romney says, 'No.'"

Massachusetts Gov. Deval Patrick: "Today, with labor at the table, we've made the reforms in our pension and benefits systems, our schools, our transportation system and more that Mr. Romney only talked about. And today in Massachusetts, you can also marry whomever you love."

Chicago Mayor Rahm Emanuel: "Whose leadership, whose judgment, whose values do you want in the White House when that crisis lands like a thud on the Oval Office desk? ... A person who wanted to keep "don't ask, don't tell," or a president who believes that who you love should not keep you from serving the country you love?"