Mike Bloomberg is the Pets.com of politics | Ad Age
Skip to main content

But his failed campaign is hardly an indictment of advertising 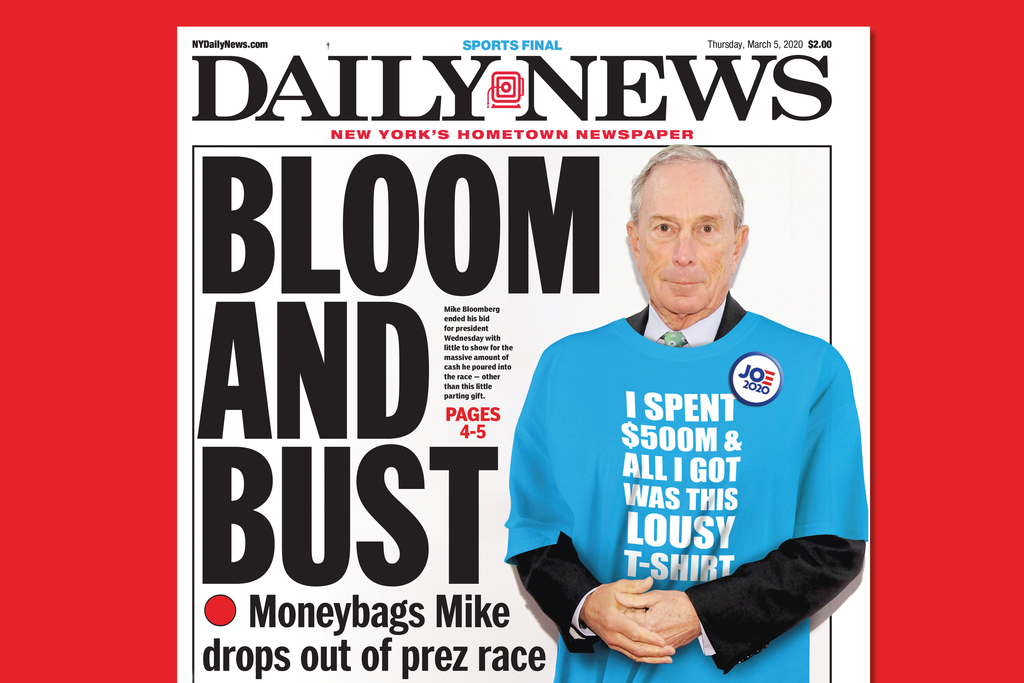 All manner of ad-supported media, including the Daily News, are dancing on the grave of Mike Bloomberg's campaign.

The morning after Mike Bloomberg’s withdrawal from the race for the Democratic presidential nomination, Ad Age Executive Editor Judy Pollack pointed out a certain sound we were all suddenly hearing: the deafening buzz of “the old advertising-doesn’t-work” saw, as she wrote in Ad Age’s Wake-Up Call newsletter.

And really, it’s been quite fascinating watching all manner of ad-supported media dance on the grave of Bloomberg’s ad-crazed campaign. The New York Daily News, for instance, dubbed him “Moneybags Mike” and devoted its front page to a Photoshopped photo of him wearing a “I SPENT $500M & ALL I GOT WAS THIS LOUSY T-SHIRT” T-shirt.

The final tally may change since certain advance purchases of advertising can sometimes be canceled and at least partially clawed back, notes Ad Age Datacenter Director of Data Management Kevin Brown, our resident expert on the political-ad economy. But as of this writing, our analysis of campaign ad spending in partnership with Kantar/CMAG shows Bloomberg ad spending came to $585.4 million. That number includes TV and radio as well as digital advertising across Google and Facebook properties. It doesn’t capture other costs of Bloomberg’s White House bid, such as salaries, travel, IT, office space, pollsters and other political consultants—not to mention non-measured advertising expenditures like his campaign’s notorious social media meme campaign, or the cost of sushi and vanilla lattes.

To put the ad tally in context, Kevin has also done the math (see charts, below) on the other presidential wannabes with dashed hopes. The bottom line: Bloomberg’s advertising outlay is more than all the other major drop-outs—Corey Booker, Pete Buttigieg, Kamala Harris, Amy Klobuchar, Tom Steyer and Elizabeth Warren—combined.

As a thought exercise, in the last edition of Campaign Ad Scorecard, we awkwardly considered Bloomberg’s theoretical position in the annual Ad Age Leading National Advertisers ranking—“awkwardly” because, again, the tallies we have for Bloomberg don’t include all marketing-related costs (whereas LNA totals include just about everything but fixed overhead costs)—and he landed at roughly No. 118, with annual ad spending above rather ubiquitous marketers Heineken, Kraft Heinz Co. and Hershey Co.

With the new $585.4 million total, he’d land at roughly No. 78—above the likes of Restaurant Brands International (Burger King), IBM and Gap.

One more bit of context: The Washington Post notes that with Bloomberg spending more than $200 million on advertising in just the 14 Super Tuesday states, he coughed up on average more than $100 per vote just last week—e.g., $220 per vote in Minnesota and $130 per vote in Oklahoma.

Of course, the others on the Losers List also blew millions of dollars chasing after ultimately worthless votes. And so it’s tempting to say that $895 million—the total of the six most-recent major Democratic candidates who suspended their campaigns, including Bloomberg—was totally wasted. But not all losers are created equal. We can presume that some of the candidates will try, try again (though probably not 78-year-old Bloomberg), and can chalk up their 2019-2020 spending to laying the groundwork for future runs.

For instance, the youngest credible candidate, 38-year-old Pete Buttigieg, improbably catapulted himself from a low-profile mayoralty (his South Bend, Indiana, is the 301st-largest city in the U.S. by population) to being a national political brand. And 59-year-old Amy Klobuchar certainly raised her national profile as well.

As for 62-year-old Tom Steyer, well, he should probably look into finding some new hobbies.

But let’s circle back to that Bloomberg-proves-advertising-doesn’t-work notion. We should, here and now, agree that that’s nonsense for a number of reasons:

1. Advertising did actually work great for Bloomberg—to a point.

Not only did he go from single-digit to double-digit polling nationally, but to briefly being in second place. It seems like ages ago now, but a mid-February NPR/PBS NewsHour/Marist poll had Bernie Sanders at 31 percent followed by Bloomberg at 19 percent, with Joe Biden in third at 15 percent.

Bloomberg, who launched his campaign only in late November, had a hastily assembled ground game—at least compared to some of the other major candidates who had been pressing the flesh in small and large towns across the nation for more than a year (e.g., Warren launched her campaign on Feb. 19, 2019). Sooner or later that was going to catch up with him ... and it did on Super Tuesday.

Bloomberg ads were certainly ubiquitous, but can you name a single
one that was memorable, inspiring and/or moving in any way? Even his most recent dramatic, high-profile effort—that three-minute March 1 prime-time “address to the nation” on CBS and ABC about the coronavirus pandemic—fell oddly flat. “Mike Bloomberg cosplays as president in coronavirus ad,” as The Verge summed it up.

A quick, appropriately brutal take from Ad Age’s Anthony Crupi: “There was no strategy at all to Bloomberg’s media buying; he was just Geico-ing all over the dial. Networks were merrily sponging up his incontinent cash flow like the NFL partners soaked up all the FanDuel/DraftKings loot in fall 2015.”

5. Advertising can undo only so much damage.

Bloomberg’s advertising got him polling well enough to earn a spot on stage at the Feb. 19 Democratic debate—and it was all downhill from there. While all the other candidates ganged up on him, one in particular arguably did him in. To quickly jog your memory about just how bad it was, as Ankita Rao wrote March 5 in The Guardian in a piece headlined “How Elizabeth Warren destroyed Mike Bloomberg’s campaign in 60 seconds”:

“Barely two minutes into the debate in Las Vegas ... and ignoring a moderator’s question, Warren turned to Bloomberg. ‘I’d like to talk about who we’re running against—a billionaire who calls women fat broads and horse-faced lesbians,’ she started off. ‘And no, I’m not talking about Donald Trump. I’m talking about Mayor Bloomberg.’ And she wasn’t done there. Warren went on to eviscerate his record on his less-than-transparent tax returns; on harassing women; on the racist legacies of his stop-and-frisk policing program in New York; and on redlining poor neighborhoods.”

Or as Jenna Kourafas, a Dominican University finance student, put it in a Wall Street Journal roundup of Gen Z viewpoints post-debate, “All of Mike Bloomberg’s billions can’t buy him a new reputation. Although he has been able to use his money to try to shape the narrative, during the debate it couldn’t protect him from his own past deeds. Mr. Bloomberg’s ads tout his reputation as a businessman, mayor and philanthropist, but the ad money went straight down the drain once his rivals told the other half of the story.”

6. To be blunt, the product being advertised had some, uh, flaws.

Even if Bloomberg hadn’t been K.O.’d on live television by Warren & Co., he arguably might have managed to do himself in simply by being himself—being on full, unedited view.

Surely nobody who watched that Las Vegas debate thought “This is the prissy, impatient, imperious presidential candidate I’ve been waiting for my whole life!”

And honestly, he didn’t come off much better—or particularly presidential—in his own advertising. The man is kind of a wet blanket—a low-charisma, anti-big-soda technocrat who won three terms as mayor of New York City in large part because the Big Apple’s Democratic machine failed to field viable candidates, so he stepped into the void. He thought he could do the same this time, but instead the void swallowed him.

So let’s dispense with the reflexive advertising-doesn’t-work post-mortem of the Bloomberg campaign. Nobody has to tell readers of Ad Age (or anybody, really) that there are countless examples of Madison Avenue working brilliantly for all sorts of products—from McDonald’s hamburgers to Apple iPhones—but sometimes something is such a dud that no amount of advertising can get enough people to buy it.

Ultimately, Bloomberg’s advertising—in its obscene-windfall-for-media-companies scale and eventual uselessness—calls to mind nothing so much as the dot-com bubble of the late ’90s/early ’00s, when dubious start-ups spent hundreds of millions to promote things nobody wanted and which never stood a chance.