The Philadelphia Story: CNN Is Dominating the DNC Ratings Race

Demo Deliveries Are Up 24% Versus the 2012 Convention 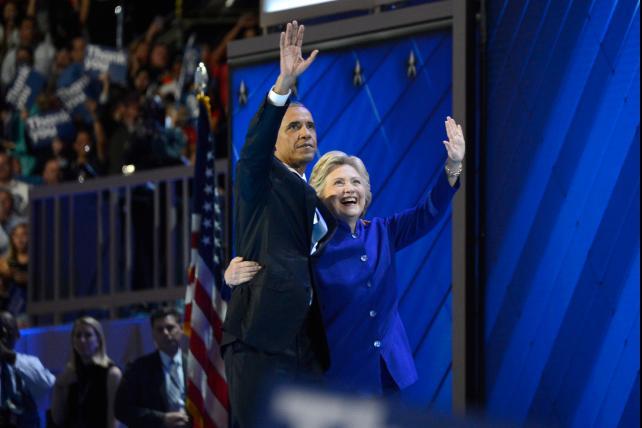 Ratings for the third night of the Democratic National Convention experienced some moderate erosion compared to Tuesday night's numbers, but overall the Hillary huddle continues to draw a bigger crowd than last week's GOP event.

According to Nielsen live-plus-same-day data, President Bill Clinton's Tuesday night speech edged President Barack Obama's address by some 1.1 million viewers, although the POTUS still managed to out-deliver the corresponding night of the Republican National Convention by a margin of 930,000 viewers.

Through the first three days of coverage, the DNC is averaging 24.8 million viewers per night across ABC, CBS, NBC, CNN, Fox News Channel and MSNBC, giving the event a healthy 3.2 million-viewer lead over the GOP assembly. Moreover, having posted an average 6.8 rating in the core news demo, the Democrats have established an advantage of some 1.58 million adults 25-54.

The DNC's average draw of 8.07 million adults 25-54 marks a 24% improvement over the deliveries for the 2012 convention, which averaged a hair over 7.4 million demographically relevant viewers.

CNN is dominating this year's DNC, averaging 6.12 million viewers over the course of the first three nights, up 54% compared to 3.97 million in 2012. More importantly, the Turner news network has pumped up its demo numbers by 48%, drawing 2.11 million adults 25-54. Oddly enough, the only other member of the core six networks to expand on its demo performance from four years ago is last-placce Fox News Channel, which thus far is up 12% to 714,000 adults 25-54.

CNN's flashy DNC showing is emblematic of the network's recent successes under president Jeff Zucker. After a five-year stretch (2009-13) in which it had been remanded to the cable news ratings cellar, CNN is now within shooting distance of Fox News for the first time in a decade. Year-to-date, CNN is averaging 395,000 adults 25-54 in primetime, putting it within 35,000 viewers of achieving ratings parity with FNC.

On the other side of the ledger, ABC is down 7% to 1.26 million adults 25-54, while CBS has slumped 26% to 955,000 representatives of the news demo. While up nearly 250,000 total viewers compared to 2012, MSNBC's demo deliveries are off by 8% to 1.32 million, and second-place NBC dropped 10% to 1.72 million adults 25-54. (Year-over-year comparisons for NBC are a little squirrelly, as the network punted on the third night of the 2012 DNC in order to air the annual NFL Kickoff Game. The Giants-Cowboys showdown drew 23.9 million viewers, out-delivering the 20.7 million viewers who tuned in for that night's DNC coverage on the five participating networks.)

The top ad categories represented during the broadcast coverage of the DNC include automotive, pharmaceuticals and movies. In addition to the lighter-than-usual paid ad load, the three nets have used the convention as a means to promote some of their new fall shows. ABC aired spots for its political thriller "Designated Survivor" and the legal drama "Notorious," while CBS ran a teaser for its upcoming "NCIS" lead-out "Bull." Just before President Obama spoke to the delegates, NBC ran a promo for its time travel adventure "Timeless," which is set to bow in the plum post-"The Voice" slot on Monday, Oct. 3.

The 2016 DNC wraps up tonight with Hillary Clinton's 10 p.m. EDT keynote speech. The former Secretary of State, U.S. Senator and First Lady will be introduced by her daughter, Chelsea Clinton.

While the closing night of the convention is likely to draw north of 30 million viewers, the really yuge numbers will start rolling in when the Democratic nominee debates her Republican opponent, Donald J. Trump. According to Nielsen, the most-watched presidential debate of all time -- or at least since the company first started to collect viewership data for the events back in 1976 -- was the Oct. 28, 1980 showdown between incumbent President Jimmy Carter and former California Governor Ronald Reagan. The lone debate of the 1980 election cycle delivered a whopping 80.6 million viewers across ABC, CBS and NBC.