Political Partisans Agree on One Thing: They Like Amazon 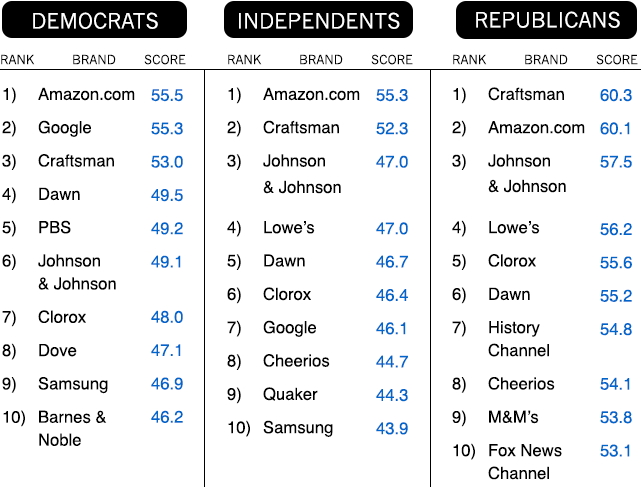 Democrats and Republicans might not agree on much, especially in a particularly bitter midterm election cycle. But a 2014 YouGov BrandIndex ranking of favorite brands finds some agreement among political partisans. Amazon, for one, comes in No. 1 among Democrats and Independents and No. 2 among Republicans.

Craftsman, Johnson & Johnson, Clorox and Dawn were the four other brands that landed in the Top 10 lists of people of all political stripes. Samsung made its debut; Home Depot fell off.

YouGov interviewed 600,000 people concerning a portfolio of 1,200 brands. The margin of error, according to YouGov, is +/- 2%. The BrandIndex's Index score ranges from 100 to -100 and are compiled by subtracting negative feedback from positive. A zero score means equal positive and negative feedback.

This year the company also unveiled some information about brands at the bottom of their rankings. It didn't release a Bottom 10 list, but it did share the poorest performer for each affiliation. Not surprisingly, Fox News (with a -28) came in last with Democrats and MSNBC (-31) last with Republicans. Perhaps a little surprising: Red Bull and 5-Hour Energy tied for last spot with Independents with a -17. According to YouGov, cable companies scored low across the board and online dating sites performed poorly with both Republicans and Democrats.

It doesn't take an advanced degree to see why PBS, History Channel and Fox News landed where they did, but M&M's, Quaker and Barnes & Noble are head-scratchers to a certain extent.

Dove could be chalked up to another year of pushing female-empowerment ads -- not something that plays only to Democrats, but in a year in which the party is pushing the notion of a War on Women, it makes a certain kind of sense.

Interestingly, Cheerios, which made news last year and this year with marketing that focused on a biracial family, didn't show up on the Democratic list but did show up at No. 8 on the list for both Independents and Republicans. That's something that contrasts with the stereotypical view held by some Democrats that Republicans harbor latent racist tendencies.

With the exception of obviously partisan media outlets like Fox News and MSNBC, most brands steer clear of partisan marketing for good reason.

"For the vast majority of brands, establishing a brand positioning based on party affiliation would be risky and unnecessarily limiting," said YouGov BrandIndex CEO Ted Marzilli. But, he added, "the danger is that some brands might unwittingly position themselves in this way and be turning off a big segment of the consumer base."