Poll: Who Wins the Brand Battle of Trump vs. Fox News?

The Presumptive Leader Is Sitting out the Last Debate Before Iowa 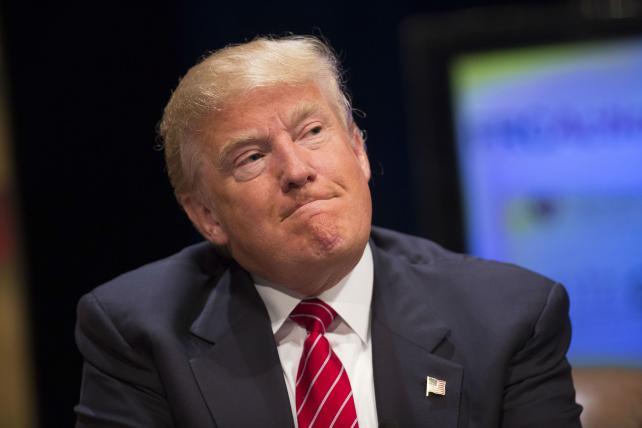 Citing unfair treatment by Fox News, Donald Trump will not participate in the Republican presidential debate on Thursday, his campaign manager told reporters on Tuesday.

Corey Lewandowski said the campaign is moving ahead with plans to host a rally in Iowa for the non-profit group Wounded Warriors during the debate, which is scheduled to begin at 9 p.m. Eastern time.

"He will not be participating in the Fox News debate on Thursday night," Mr. Lewandowski said. His comments came just minutes after Trump told reporters during a press conference before a rally in Marshalltown, Iowa, that he "probably won't bother" participating in the debate.

Mr. Trump had attacked Fox News host Megyn Kelly for treating him "unfairly" at the first debate of the election cycle, prompting the network to issue a response earlier Tuesday.

"We learned from a secret back channel that the Ayatollah and Putin both intend to treat Donald Trump unfairly when they meet with him if he becomes president," the cable network said in a public statement. Mr. Trump slammed the statement, saying "it was written by a child."

On her Fox News program Tuesday night, Ms. Kelly said she will still co-moderate the debate. "The truth is he doesn't get to control the media," Ms. Kelly said. "I'll be there. ... The debate will go on with or without Trump."

The network said in an e-mailed statement that "capitulating to politicians' ultimatums about a debate moderator violates all journalistic standards, as do threats." Fox said it had "warned" Mr. Lewandowski "not to level any more threats" against Kelly, as when he allegedly told the network that "Megyn had a 'rough couple of days after that last debate' and he 'would hate to have her go through that again.'"

"'We can't give in to terrorizations toward any of our employees," the network said.

Mr. Trump's campaign also released a statement saying that "Mr. Trump knows a bad deal when he sees one."

"FOX News is making tens of millions of dollars on debates, and setting ratings records (the highest in history), where as in previous years they were low-rated afterthoughts," the statement said. "Unlike the very stupid, highly incompetent people running our country into the ground, Mr. Trump knows when to walk away."

Senator Ted Cruz wasted no time in attacking Mr. Trump for skipping the debate, telling radio host Mark Levin that Mr. Trump was "afraid" to face questions. "This is a job interview," Mr. Cruz told Levin. "You have to be able to answer the questions of the American people." Mr. Cruz also challenged Mr. Trump to a one-on-one debate.

Retired neurosurgeon Ben Carson said he was skeptical that Mr. Trump was for real. "I'll believe it when I see it," Mr. Carson told Levin.

New Jersey Governor Chris Christie told Ms. Kelly on Fox News that Mr. Trump's absence at the debate will "give us more time to talk." "That's OK with me, but the American people should wonder: If you're not willing to show up when everything isn't going your way? That's not the way your job as governor goes," Mr. Christie said. "I'll be there."

Polls have Mr. Trump leading in Iowa ahead of the Feb. 1 caucuses. Cruz, of Texas, is in second place. Thursday's debate is Republicans' final one ahead of the caucuses.

Mr. Trump has flirted in the past with skipping debates and also advocated that networks donate a portion of the money they earn in advertising to Wounded Warriors, which helps military members who have been injured in combat. Trump's involvement in the debates has led to record ratings, including the Fox News debate moderated by Ms. Kelly that drew more than 24 million viewers.

On stage at Tuesday's campaign rally, Mr. Trump only alluded to the news his campaign had just broken moments before.

"I have no objection to Fox News," Mr. Trump said. "I made a little bit of an announcement before, but it's not that big of a deal. ... After a year you're going to say, 'Wow. What a difference.' You're going to be so proud of your country again. And we're going to make America great again."

Mr. Trump isn't the first top-tier presidential candidate to skip a debate. Ronald Reagan did not attend a Republican debate ahead of the 1980 Iowa caucuses, which he lost to George H.W. Bush. Reagan went on to the win the nomination and the presidency.