The Third Presidential Debate Summed Up in 31 Tweets 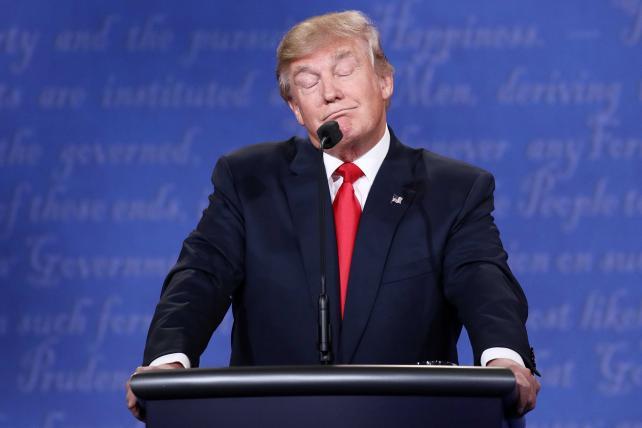 The third and final presidential debate that took place in Las Vegas Tuesday night tackled many of the most important issues facing our nation -- bad hombres, puppetry, BFFs, nasty women -- and of course the Twittersphere dutifully kept track of it all.

Although Excedrin was a sponsor of Debate Night on Twitter -- paying for the promoted hashtag #DebateHeadache to appear atop the list of trending topics -- some viewers stocked up on other provisions.

The first big viral moment of the evening was the one that prompted its own spontaneous hashtag, #badhombres, which became an organic trending topic on Twitter. Speaking about his plan to deport illegal immigrants, Donald Trump declared that "We have some bad hombres here and we're going to get them out."

Bad hombres -- the drinking game we didn't know existed until, suddenly, it existed.

Bad Hombres -- a movie (maybe a camp Western?) we didn't even know was being made.

Here it should be noted that there was debate on Twitter about whether Trump said "hombres" or "ombres" -- "ombre" being a hairstyle in which long hair is dyed in a gradient, going from dark to light. Some people agreed that, yes, we absolutely must rid our nation of bad ombres.

On to the puppetry portion of the evening's entertainment!

Notably, Trump also tried to distance himself from Putin, saying, "This is not my best friend" -- and so naturally this became the most retweeted tweet of the night, according to Twitter:

Look at the date on that tweet: June 19, 2013. Yes, once again the Twittersphere went digging around in Trump's timeline to mock him with his own (historic) words.

Meanwhile, some viewers were maybe a bit confused about what they were watching.

The confusion only increased when Trump reprised his debate tactic of leaning into the microphone and repeatedly saying "Wrong" to express his disagreement with Clinton. Was Trump doing Trump? Or someone else?

Speaking of Trump doing Trump -- or Trump not doing Trump -- Kellyanne Conway, Trump's campaign manager, took to Twitter to retweet a tweet from The Washington Post's Robert Costa, sticking a big ol' typographic arrow before it to get us all to look at it.

Um... Could somebody please talk to Kellyanne?

But back to the action on stage...

Trump got a lot of criticism for interrupting Clinton during previous debates, but she sure wasn't shy about interrupting him this time around -- most notably when he brought up his Vegas hotel:

But wait, we almost forgot! Did Donald Trump apologize to his wife in the wake of #TrumpTapes and multiple allegations of sexual assault? Moderator Chris Wallace didn't ask that specific question, but Trump still graciously volunteered an answer:

Trump also served up one of the night's literal laugh lines at this point in the debate.

Another literal laugh line: Trump's response to Clinton saying that he thinks everything is rigged against him, including the Emmys, which failed to give his old reality TV show, "The Apprentice," a third Emmy award, much to his dismay at the time.

Which, naturally, caused #Emmys to become a trending topic on Twitter.

The larger point of the exchange, of course, was whether or not Trump, who has been insisting the presidential election is rigged, will accept the results on Election Day -- something Chris Wallace pressed him on repeatedly. "I will look at it at the time," Trump said. "I'm not looking at anything now."

Check out Clinton's facial expression as he said that:

What do you call that facial expression?

OK, but what would you call this?:

The evening's entertainment arguably came full circle when Trump muttered "Such a nasty woman" under his breath -- which caused "Nasty Woman" to become a Twitter trending topic.

Clinton, who perhaps didn't hear it, kept right on talking, but speaking of facial expressions:

As the end of the debate neared, The Onion detected an existential subtext.

And the final word on the debate? We'll leave that to @StefonOn2016, a parody account that pays tribute to the Stefon character Bill Hader used to do on "Saturday Night Live."