A lot of political ad spending may be going to waste as Trump builds his war chest
READ THIS NEXT
Watch: The Lincoln Project declares war on Rupert Murdoch and Fox News in new attack ad 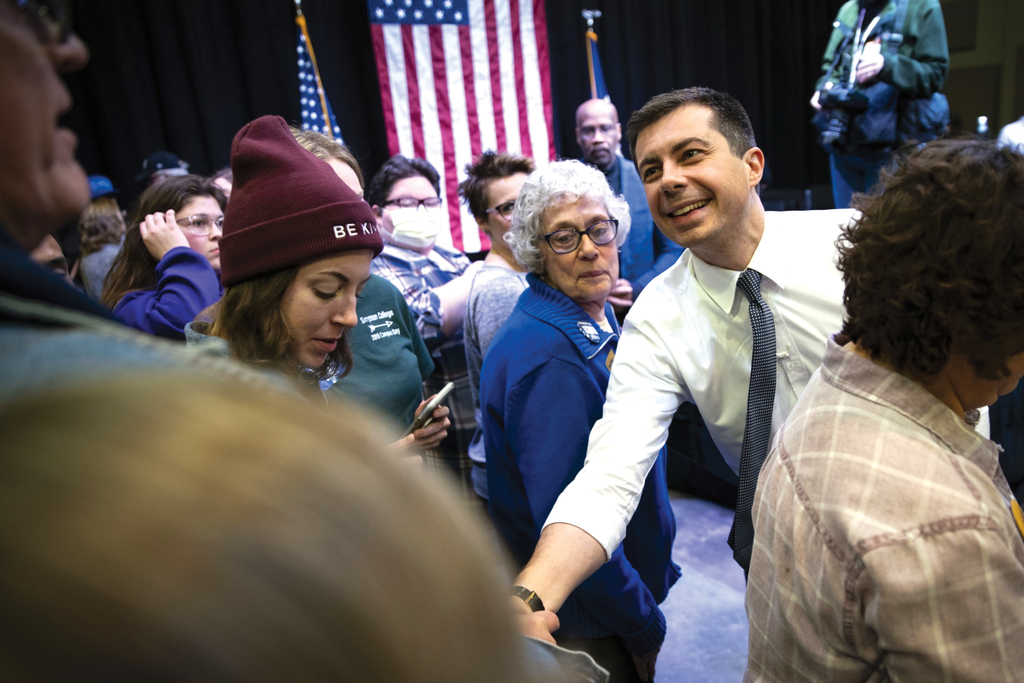 Pete Buttigieg at a campaign event in Indianola, Iowa.

OK, so let’s vote on the real issue at hand. Pick one:
A. Political advertising in the current cycle is moving the needle for the U.S. presidential candidates.

B. Political advertising in the current cycle totally isn’t working.

C. Political advertising in the current cycle would or could be working, maybe, if the candidates and the parties weren’t so intent on sabotaging and undermining their own messaging.

D. Some of the above, or all of the above, or none of the above—depending on the day, the hour, or the minute.
Consider, for starters, the $71.1 million spent by candidates to target Iowa voters with ads leading up to the Republican and Democratic caucuses. The overwhelming chunk of that outlay, as tallied by the latest Ad Age Datacenter analysis of campaign ad spending in partnership with Kantar/CMAG, was courtesy of Democratic candidates.

One key exception: Mike Bloomberg, the Johnny-come-lately Democratic candidate (remember, he only kicked off his campaign Nov. 24) who has blown through astonishing sums on, mostly, national TV advertising. (He devoted essentially $0 to targeting Iowa voters.) Part of that was to try to get his national poll numbers up so he could earn stage time at the various Democratic debates, and also because Bloomberg’s campaign realized it was too late to meaningfully gain in the early-voting states (and it was too late to even get on the Iowa ballot).

Now Bloomberg—whose overall ad spending across TV and radio as well as Facebook and Google properties is up to $319.4 million per Datacenter’s math—seems like ... well, not a genius, exactly, but a high-roller who accidentally placed the right bet (accidentally, given that nobody could have predicted the Iowa meltdown). Cue the headlines in the aftermath: “Bloomberg plans to double ad spending after Iowa caucus problem” (The New York Times), “Bloomberg feasts on Iowa chaos” (Politico), “Why Bloomberg benefits most from Iowa fiasco” (CNN), and so on.

Basically, Bloomberg got to buy some time while the hapless Democratic Party apparatus in Iowa engaged in a reset or a reboot (or a purge or, who knows, maybe a “Going Out of Business” sale?).

But let’s look ahead to New Hampshire, where the primary is set for Feb. 11. Hedge-fund billionaire Democratic candidate Tom Steyer has devoted $19.8 million to advertising that targets the Granite State—a not-inconsiderable sum as a portion of his total spending to date ($179.5 million, second only to Bloomberg’s), particularly when you consider the warm bodies there (1.4 million, which makes it only the 41st most populous state in the nation).

Yes, the math and the proportionality and the priorities of the American primary system, at least for those in the challenger party, are completely out of whack.

Meanwhile, the nominal winners of the Iowa caucus (if there’s such a thing as winners in the aftermath of a gruesome train wreck), former South Bend, Indiana, Mayor Pete Buttigieg and Vermont Senator Bernie Sanders, have devoted, respectively, $4.0 million and $5.9 million to targeting ads at New Hampshire voters.

How’s that working out for him? Not so great, frankly. MSNBC.com put it this way: “Biden takes gut punch in New Hampshire polling.” Iowa, it seems, made him feel like damaged goods—and/or yesterday’s (or last summer’s) news, and it’s kind of too late for him to strafe the tiny New England state with enough feel-good, vote-for-Joe messaging to matter. Sanders and Buttigieg are leading in the polls and Biden seems unable and unlikely to be able to blunt their momentum.

President Trump, meanwhile, is riding high on his impeachment acquittal and his current approval ratings: 49 percent, per Gallup—a personal best. The Iowa caucus was, of course, a total gift to him, as was his acquittal for those who find a he-beat-the-system narrative to be enticing (as many in America clearly do).

And remember, while the Dems were melting down in Iowa, Trump was sailing to a 97.1 percent vote victory in the Republican caucus there. His Republican challengers, former Massachusetts Governor Bill Weld and former U.S. Representative Joe Walsh of Illinois (who quietly suspended his campaign as this story was going to press), have spent negligible amounts on early-voting states, not to mention nationally.

What’s becoming clear is that Trump can conserve his ad firepower—that Super Bowl commercial aside, his outlay so far has been just $54.7 million across TV and radio as well as Facebook and Google properties—while the Democrats eat themselves. (And keep in mind that the Trump campaign’s digital spending hasn’t really been about swaying voters; it’s been about fundraising by targeting diehards, to keep the campaign war chest overflowing.)

Once a clear Democratic front-runner emerges—or perhaps right after the nominee is formally named on the last day of the Democratic National Convention in Milwaukee on July 16—Team Trump can devote tens of millions, or possibly hundreds of millions, to targeting said challenger with attack ads.

Those attack ads will come on top of the mainstream media’s generous amplification of the demo job he’ll have been doing on Twitter all spring and summer long, for free.

Can the ultimate Democratic nominee spend anywhere near enough to counter all that? Stay tuned.

Presidential campaign media spending
Overall and for New Hampshire and Nevada. Dollars in millions.
Campaign spending by state
For ads related to the presidency. Dollars in millions.
New Hampshire-targeted presidential campaign media spending
By DMA. Dollars in millions.
Neveda-targeted presidential campaign media spending
By DMA. Dollars in millions.
Source: Spending includes TV, radio and digital spending from Kantar/CMAG. TV and radio spending include broadcast TV, local/regional cable and satellite TV, radio and Spanish-language local TV. Digital includes Facebook and Google properties. Spending allocated to New Hampshire and Nevada in these tables excludes digital. All other for these states includes some statewide cable and satellite spending. Spending by state excludes national advertising. Buys are included from Jan. 1, 2019, through Election Day, including advance bookings as of Feb. 6, 2020. All other includes spending by candidates who have dropped out of the race. Spending for Tom Steyer includes Act Now on Climate Change and Need to Impeach. Spending for Donald Trump includes Committee to Defend the President and Judicial Crisis Network. The New Hampshire primaries are Feb. 11, 2020. The Nevada Democratic caucuses are Feb. 22, 2020.