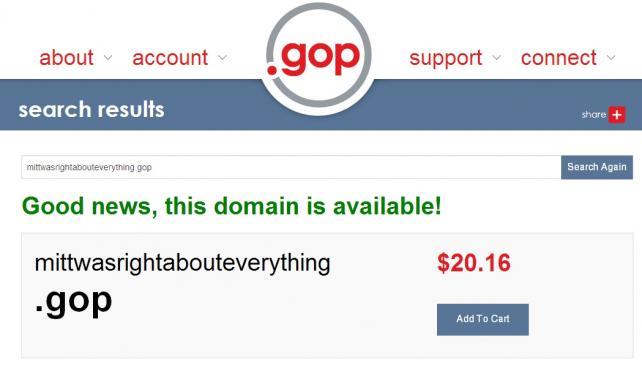 It's become a political rite of passage: When a political party unveils a new tech-related initiative, detractors on the opposite side of the aisle inevitably pounce with parody sites and social-media lampoons. The latest hazing victim was the Republican party, after the launch of the new .gop domain.

In a novel approach to spurring adoption of centralized-digital platforms among like-minded campaigns and organizations, the Republican State Leadership Committee is the official registry for the .gop domain. What that means in practice is that the RSLC, which works to elect Republican candidates running for statewide legislative offices, is selling domain names that feature the .gop suffix. They cost $20.16 each, a nod to the next presidential election year.

Needless to say some Democrats and liberals decided it was a good opportunity to mock the Republican party's digital evangelists again. On Tuesday, a handful of people searched the system for goof-domain names, some more juvenile than others: Butt.gop, Lewinsky.gop, Benghazi.gop and GayPorn.gop among them. The afternoon dalliance was chronicled in a Gawker story the same day.

"We knew that that type of traffic would be coming, and it didn't disappoint," said Will Martinez, who is leading the .gop initiative as VP, sales and marketing for .gop. The project mission is to coax every state-level candidate campaign, federal candidates and other like-minded entities (think College Republican organizations, for example) to host their websites on the .gop domain.

"It's the Internet -- we understand that. We knew that was coming," said Mr. Martinez regarding the spoofs. "You had people helping to drive viral traffic. We haven't spent a dollar on marketing yet and it's driven a lot of sales," he said, regarding tweets mocking the party's domain sale.

The RSLC would not reveal the number of .gop domains sold since they became available July 8 at Join.gop, and just how much traffic has originated from those links is unclear.

Also unclear is what, if anything, will become of the joke domains. The RSLC said it would not discuss which domains have been purchased or by whom. RSLC is not monitoring content of sites or emails hosted on .gop domains and won't build sites for others using .gop domains, according to Mr. Martinez.

When the Republican National Committee touted Parabellum Labs, an area for developers and social media and data-focused staff housed in the RNC's Washington headquarters, the party almost immediately fell prey to observers noting the Parabellum name refers to a Nazi-era firearm. It didn't take long for satirists to mimic the ParabellumLabs.com site at ParabellumLabs.org and ParabellumLabs.net, complete with job listings such as "Fraudulent Website Designer" and a very-dated video guide to using the internet from 1990.

The existence of the ParabellumLabs.org caricature might not have been so poignant had the GOP purchased the.org and .net versions of the domain, a fairly standard tactic for web developers that want to ensure people view their sites as intended.

On average, buyers have purchased 2.61 .gop domains rather than just one, according to Mr. Martinez. The domain payments go into RSLC coffers, and are not considered political donations, he said. Expect some of those funds to go towards maintaining the domain, said Mr. Martinez. "We're the registry so…we set up the rules to govern it and then we make names available and we keep things refreshed."

Some of the domains suggested by .gop critics, including GayPorn.gop and LegitimateRape.gop (an allusion to former Republican Missouri Congressman and failed 2012 Senate candidate Todd Akin, who raised eyebrows by implying that pregnancies resulting from "legitimate rape" are rare because "the female body has ways to try to shut that whole thing down.") are not available, meaning they have probably been purchased. Others, such as MittWasRightAboutEverything.gop still are up for grabs.

The party organization plans to launch its own additional .gop sites -- Register.gop and Donate.gop -- "in the coming weeks," he said. "We see a much larger network effect created by .gop," said Mr. Martinez.