Romney and Republicans Outspent Obama, But Couldn't Out-Advertise Him

Targeting and Message-Control Carried the Day
READ THIS NEXT
Watch Caitlyn Jenner’s epic, substance-free first campaign ad, ‘Caitlyn For California’
Elizabeth Wilner, Kantar Media CMAG
We have long held that to look at political TV advertising only through the lens of how much money is spent is to miss most of the story. That's an admittedly self-serving position for the only firm in the country capable of assessing the content and placement of TV advertising along with its price tag. But the outcome of 2012's marquee contest more than proves our point.

In 2012, the presidential nominee who was outspent on TV was not, in fact, out-advertised. Not only that , but to view the presidential air war just in the context of dollars would be to overlook how President Barack Obama won the election -- by targeting his way to a second term.

CMAG projected that about $1.1 billion would be spent on broadcast TV advertising in the presidential race, primary and general election advertising included. And in fact, our preliminary estimate for actual spend is $953 million. That's an immense sum well worth discussion and debate, particularly given the ratio of dollars spent on advertising to votes that ultimately were moved by it.

Therein lies the rub. In politics, TV advertising only matters at the margin, influencing a small pool of undecided voters and possibly boosting turnout among likely supporters. This means that increasingly eye-popping sums of money are spent to affect the choices of fewer and fewer people. 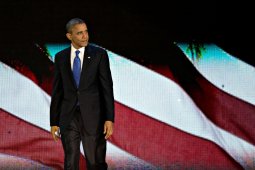 Barack Obama after his acceptance speech in Chicago

But three of our last four presidential elections have been decided at the margin. In 2000 and 2004, the execution of the nominees' campaigns had real impact on the outcome. In 2012, we'd venture to suggest that execution -- including TV advertising -- was almost everything, with an added boost from a hurricane and maybe a few other factors.

TV advertising is the single biggest undertaking of any campaign: about 75% of everything a candidate raises goes to support it, and about two-thirds of all ad dollars go to local broadcast TV. For faceless outside groups that exist solely for the purpose of advertising, the proportion of funds raised that is spent on TV is surely higher.

Because the impact of the advertising is at the margins, the path to understanding it leads not through the tonnage but through the targeting and messaging. As anticipated, Republicans did indeed outspend Democrats on broadcast TV in the general election contest by CMAG's preliminary estimate of $479 million to $396 million, but Obama's campaign either held its own or retained the edge in many aspects of the air war. Among them:

Smarter analysts than us called this a serious risk incurred on behalf of a nominee about whom the country knew little and whom Democrats raced to define with an early and intense negative ad onslaught throughout the summer. Romney's suddenly improved poll standing after the first debate suggests that if his campaign had moved to round out his profile earlier, the impact of these attacks may have been blunted, possibly to an outcome-altering effect.

Yet even with scarcely any positive messaging, Romney nearly won. Meanwhile, the Obama campaign maintained only slightly more positive messaging during its seven-month assault on Romney. CMAG found 81% of Obama's ads had a negative tone, whereas 98% of all Democratic group ad occurrences—Priorities USA Action being responsible for most of them—were negative. The prevailing negativity begs the question of whether the positive presidential spot is becoming a lost art, at least in close elections.

And while the national party committees typically act as arms of their nominees' campaigns when it comes to ad messaging, they played diminished roles in 2012. The DNC coordinated a limited sum of advertising with Obama's campaign but did not do any independent-expenditure advertising on his behalf. The RNC engaged in both coordinated and independent-expenditure advertising, but its share of the ad pie was hugely overshadowed by the higher-spending Republican outside groups.

While their nominees took opposing approaches, with Obama's campaign internalizing the traditional party role in advertising and Romney's campaign choosing to outsource, parallel coups occurred. The parties were less relevant in the air war.

The Obama campaign was frank about expecting to be outspent in the fall. However, as the incumbent, and for lack of a primary challenger, it also had the luxury of time to plan for being outspent. That plan included 1) advertising heavily early in the race in order to define Romney before he defined himself, before the airwaves became saturated in the fall, and before ad rates really soared; and 2) laying down orders early. Not all of their early orders cleared at the original prices, but many did.

Once Labor Day passed and stations were required to charge candidates lower rates to advertise, Obama's dollars stretched further compared not only with the Republican outside groups that paid premium rates, but also -- somewhat surprisingly -- to the Romney campaign, which chose to retain more flexibility in what they bought and more certainty in what they paid in exchange for skipping opportunities to pay less.

The competing forces of the 2012 presidential race were an economy that favored Romney vs. demographics that favored Obama. The hallmark of Romney's TV ad campaign was its emphasis on economic themes; its efforts were lighter on targeting. Obama's campaign was thin on policy but historic for the sophistication of its targeting through both message and placement.

Women, Latinos, young people, and blue-collar families in the auto industry were among its targets: Obama's campaign created unique spots to disqualify Romney with these audiences and bought national network (including Summer Olympics), national cable, local spot and local cable airtime accordingly. A steady stream of ads featured custom-tailored messages such as women criticizing Romney on abortion and Latinos (including some celebrities) criticizing Romney in Spanish. In all, Obama's campaign produced nine unique ads focusing on abortion and 38 unique ads in Spanish compared to the Romney campaign's one and 18.

Meanwhile, Romney mostly sought to reach women through ads focusing on jobs and the potential impact of the nation's debts. Many of his ads in Spanish were dubs of his English-language spots. His ad campaign zeroed in on the halting economic recovery, but relied on less modern ad tactics for execution. They depended on local spot for delivery. They "released" a number of ads which never aired or aired mainly in the Washington, D.C., market where the political elite would see them. Their version of targeted ads included a series tailored to battleground states through text and images of skylines.

Obama's campaign ultimately won the air war by making the very most of its resources and deploying all the weapons in the advertising arsenal: timing, tiered rates and rates reserved for candidates, programming platforms, and the ad content itself. They short-circuited the party advertising apparatus to bring more ad dollars under their direct control; leveraged advances in local cable ad sales to balance out their cable advertising and played local and national against each other to get better rates; and for content, relied heavily on attacks designed for maximum impact on their desired targets.

It's certainly true that Obama had significant resources and had he been outspent by a wider margin, we might well be writing today about how the outside groups helped win the air war for President-elect Romney. But as much money as was ultimately spent in 2012, quality and quality control ultimately mattered more.

ABOUT THE AUTHOR
Elizabeth Wilner is VP of Kantar Media's CMAG, which tracks and analyzes broadcast TV advertising content, placement and spend.

Elizabeth Wilner
View all articles by this author