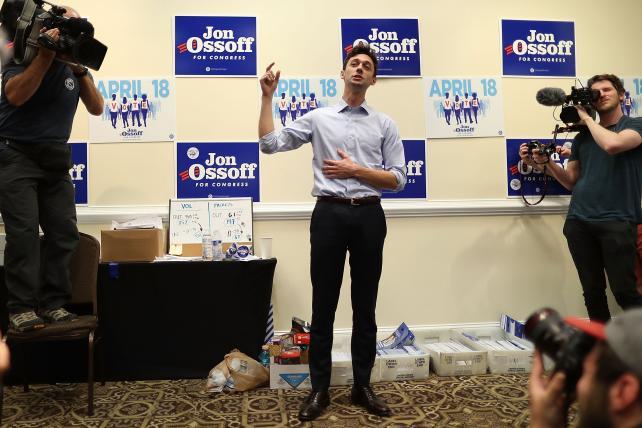 Democrats in Georgia's 6th congressional district are rallying behind former congressional staffer Jon Ossoff in a special House election today. The candidate has emerged as a national sensation, attracting more than $8 million in donations as of earlier this month and the support of celebrities including '80s sitcom star and ladies' baseball gear purveyor Alyssa Milano. He's even inspired the #VoteYourOssoff hashtag.

Well, while district residents have been participating in early voting, Ossoff's campaign has been spending its you-know-what off on marketing-related services.

According to Ad Age analysis of Federal Election Commission filings, the campaign has spent more than $5 million in just two months on advertising, media costs and focus group research alone, a hefty sum. By comparison, in 2016's Wisconsin's District 1 race -- one of the year's top ten most expensive House races, Rep. Paul Ryan's campaign spent around $13 million in total throughout the entire election cycle, according to the Center for Responsive Politics.

"The thing that's really noteworthy here is it's the first truly competitive election since Donald Trump assumed office," said Democratic Strategist Eli Kaplan. That gives Ossoff and his opponents the ability "to raise a lot more than any similarly-situated race," Kaplan said.

The bulk of the Ossoff campaign's marketing-related spending, $2.7 million, has gone towards media buys handled by Canal Partners Media. Online fundraising and list acquisition -- used to catch wind for the sails of a campaign, particularly one with national attention -- has been done by Mothership Strategies, which grabbed more than $1.6 million from the Ossoff camp in February and March. Not to be outdone in the out-of-this-world department, direct mail firm Mission Control scored $585,652 from the campaign in March. Around $115,000 went towards ad production conducted by MVAR Media.

The campaign also spent around $150,000 on survey and focus group research by Lake Research and Anzalone Liszt Grove Research.

Keep in mind that this is likely only the first leg of the Georgia race, which pits 11 Republicans and five Democrats against one another. If no one get 50% of the vote, the election goes to a runoff on June 20. A Democratic win in the closely-watched election would flip the seat from the GOP. Ossoff's chances of hitting the halfway mark are iffy, however: FiveThirtyEight.com's analysis of the last nine polls taken puts the candidate at 42%.

Whoever wins will take the seat vacated by Tom Price when he became Health and Human Services Secretary in the Trump administration. That alone gives the seat significance, but this is also the first special election this year in which Democrats believe they have a real chance, which partially explains why the party has thrown its weight behind a candidate in the primary, a rare occurrence.

The cachet of being associated with a nationally-observed race, and one that is the first big test of Democrats' ability to turn anti-Trump sentiment into actual votes in a potentially-winnable election, has helped coax money from outside organizations such as pro-Ossoff groups Sierra Club and Latino Victory Fund and Ossoff opponents Conservative Campaign Committee and Congressional Leadership Fund. FEC data shows all four groups spending in the Georgia election recently.

While early elections such as Tuesday's offer organizations opportunities to gather supporter contact information for future fundraising, gauge the electorate's opinions on issues and help update voter information, they shouldn't necessarily be seen as barometers for the upcoming 2018 midterms. That's particularly true with a race drawing attention from far and wide.

In other words, groups should avoid recalibrating voter scores, which help inform message targeting and field canvassing, solely based on what happens in Georgia. "It's a data point," said Kaplan. Anyone who would predict the outcome of 2018 based on an election such as Tuesday's, he said, "doesn't deserve to work in this field."