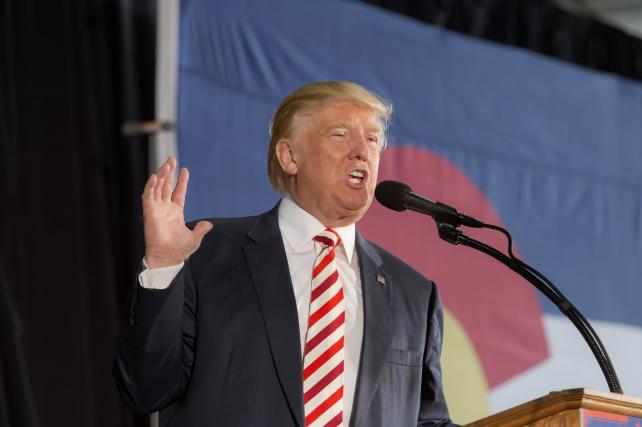 Donald Trump said he would block the proposed AT&T Inc.-Time Warner Inc. tie-up if he becomes U.S. president, arguing that such media combinations leave too much power concentrated among too few companies, including ones he says are hostile to his presidential bid and rigging the election for Hillary Clinton.

The Republican commented during a speech in Gettysburg, Penn., on Saturday billed as an unveiling of Trump's "contract with the voter" but heavy on themes and policies outlined earlier in the campaign. They included building a wall on the U.S.-Mexico border, renegotiating trade deals, repealing Obamacare, and reversing the executive actions of President Barack Obama.

Mr. Trump also suggested he would favor a break up of NBC and Comcast Corp., a merger completed in 2013. Such deals, he said, are "poison" to democracy and result in companies "telling the voters what to think and what to do." Mr. Trump, who has called the U.S. election rigged multiple times this month, didn't discuss mergers among non-media companies.

On his signature proposal to build a wall along the U.S. border with Mexico, Mr. Trump said he plans to fully fund the project through legislation he called "End Illegal Immigration Act." This would leave U.S. taxpayers with the tab "with the full understanding that the country Mexico will be reimbursing the United States," Mr. Trump's campaign said in a handout, without providing details.

Mexican President Enrique Peña Nieto has insisted his country won't cover any of the costs for a wall.

The billionaire real estate developer focused on the proposed deal for AT&T to buy Time Warner for more than $80 billion as part of a 14-minute wind-up to the policy portions of the speech, saying the merger would be "an example of the power structure I'm fighting."

He reiterated complaints that the fix is in for the Nov. 8 election because "dishonest mainstream media" favor Ms. Clinton, report on what he says are unproven lies, and don't talk about the "massive crowd size" at his rallies.

"They're trying desperately to suppress my vote and the power of the American people," Mr. Trump said.

All of the women who have come forward with allegations of sexual misconduct during the past few weeks have "lied" to hurt his campaign, Mr. Trump said, adding "all of the liars will be sued after the election." An 11th woman plans to describe allegations of Mr. Trump's inappropriate conduct later on Saturday, according to the lawyer Gloria Allred.

"In what was billed as a major closing argument speech, Trump's major new policy was to promise political and legal retribution against the women who have accused him of groping them," Christina Reynolds, deputy communications director with Hillary For America, said in an e-mailed response.

Ms. Clinton has pulled ahead this month and holds a 6.1% lead over Trump in a hypothetical two-way race, according to an average of polls compiled by RealClearPolitics. When third-party candidates are included Clinton's lead is 5.3%.

On a weekend when both campaigns are focused on so-called battleground states, Mr. Trump took his message close to a real battleground, describing the early goals of a potential Trump administration in the town where President Abraham Lincoln in 1863 made one of the most renowned speeches in U.S. history.

After the event Mr. Trump visited the Gettysburg National Military Park, which commemorates a battle that became known as the turning point in the American Civil War when the preservation of the nation hung in the balance.