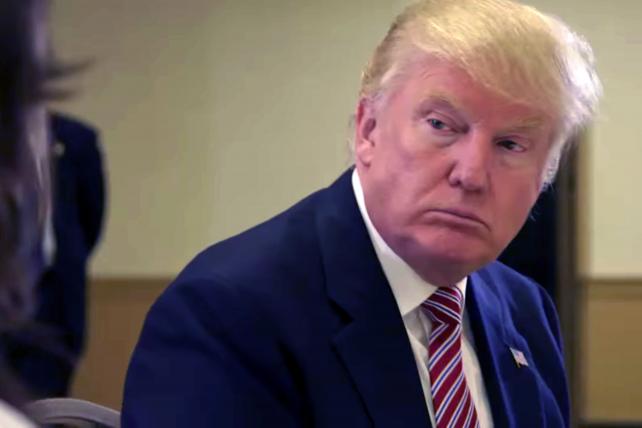 Donald Trump in a recent ad from his campaign
Credit:
Donald J. Trump for President via YouTube

Back in June, as we noted in a previous edition of Campaign Scorecard, Donald Trump expressed this view on political advertising (as quoted by the Associated Press): "I don't even know why I need so much money. You know, I go around, I make speeches, I talk to reporters. I don't even need commercials, if you want to know the truth." And indeed, the Trump campaign went through a long advertising drought over the summer, only releasing its first ad for the general election on Aug. 19.

But at some point recently, apparently someone in the Trump organization convinced the candidate that his campaign needed to step on the advertising gas pedal. On Sept. 24, the AP quoted Trump campaign adviser Jason Miller as saying that they were planning $140 million in ad buys leading up to Election Day. And then in last Friday's Campaign Scorecard, we reported that the Trump campaign, over the previous week, had rapidly booked roughly $30 million in TV and radio advertising time through Election Day.

You'd think that with the election now just four weeks away, there'd be another major surge in ad-time booking for Trump ads.

But no. Over the past 7-day period, the Trump campaign booked only about $5 million to $6 million in additional advertising through Election Day.

And today medialand is abuzz with word about Trump campaign ad cancellations. Per Maggie Haberman, presidential campaign correspondent at The New York Times:

Trump campaign is canceling hundreds of thousands of dollars in advertising in Fla, NC, OH, possibly other states, per two buying sources.

Per Chris Hayes of MSNBC:

So Trump campaign announces they raised $18 million in 24 hours after the debate and then cancel ads a week later? Something doesn't add up.

We've updated the map chart we presented last week -- a look at the top 25 media markets with booked TV and radio spending by both Team Trump and Team Clinton, including the PACs that support them. The map below is interactive: mouse over (or on mobile, tap on) the blue dots (Team Clinton) and red diamonds (Team Trump) to see who's spending what where.

As you can see, Team Trump is spending most heavily in one swing state: Florida -- where, of course, Hurricane Matthew, the evacuations surrounding the storm and the recovery efforts in its aftermath will seriously disrupt broadcasts and the audiences for those broadcasts.