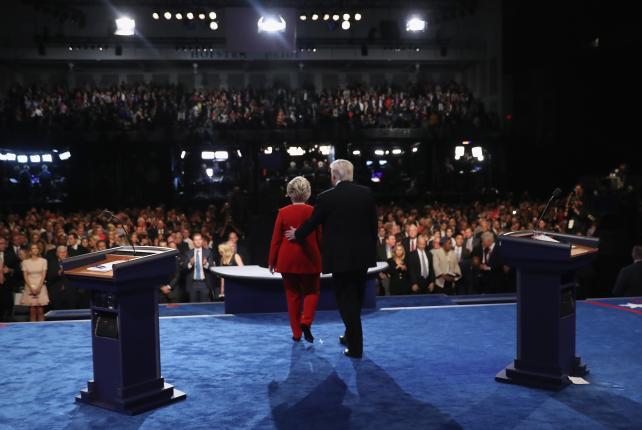 The first televised skirmish between Hillary Clinton and Donald Trump broke the all-time TV audience record for a presidential debate, averaging 84 million viewers across a dozen ad-supported broadcast and cable networks and PBS.

Monday night's showdown between the former Secretary of State, U.S. Senator and First Lady and her opponent, the real estate mogul, steak wrangler and reality TV star, surpassed the 80.6 million viewers who tuned in for the lone debate between President Jimmy Carter and former California Gov. Ronald Reagan in 1980. That event aired on the three extant broadcast networks: ABC, CBS and NBC.

The total Nielsen turnout does not include viewers who streamed the debate online or watched from a bar, restaurant, hotel or other out-of-home venue. Also not included in the final debate tally was C-Span, which is not officially measured by Nielsen.

As has been the case with every presidential debate since the first televised joust (Nixon-Kennedy, Sept. 26, 1960), Monday night's proceedings were uninterrupted by commercial messages. Pre- and post-debate ads on the Big Three broadcast networks went for as much as $250,000 per 30-second spot.

While there's no denying that the first Clinton-Trump tussle notched an absolute ratings high, its deliveries as a percentage of the population aren't nearly as impressive as those for the Carter-Reagan debate. In 1980, the U.S. population was 226 million souls, which means that the simulcasts reached 36% of the citizenry. By contrast, Clinton v. Trump I was viewed by around 26% of the population, which is estimated at around 324 million people.

The debate was so yuge it even bumped ESPN's "Monday Night Football" out of its customary perch in the No. 1 slot. The NFC South air war between the Falcons and Saints averaged 8.05 million viewers, making it the least-watched "Monday Night Football" game in the history of the program. As it so happens, the previous low-water mark was set by the very same two franchises back on Dec. 10. 2007, when just 8.45 million viewers stuck it out for New Orleans' 34-14 blowout of Atlanta.

Last season, ESPN's primetime NFL package averaged 12.9 million viewers and a 8.1 household rating. While the network won't have to square off against another debate during this election cycle, the presidential candidates are scheduled to go head-to-head with an even bigger draw in NBC's "Sunday Night Football."

Set for Sunday, Oct. 9, the second presidential debate will conflict with NBC's coverage of the Packers-Giants game. Last season, the Packers were the most-watched, highest-rated NFL franchise, averaging 24.4 million viewers and a 13.8 household rating over the course of their 11 nationally televised games. Meanwhile, as representatives of the country's No. 1 DMA, the Giants are also a big draw, closing out the 2015 campaign ranked 8th among all NFL teams with an average draw of 19.9 million viewers and an 11.9 household rating in their eight national windows.

While many pundits said that they expected the first POTUS debate to deliver Super Bowl-level numbers, drawing 100 million viewers or more, the elevated estimates failed to take into account the ongoing trend of ratings contraction, even among marquee events like the Olympics and the NFL. Through the first three weeks of the season, only Fox has managed to grow its pro pigskin ratings compared to a year ago, as three of its four TV windows are up versus the analogous period last September, while one broadcast (its only 4:20 p.m. game to-date) was flat with a 15.5 household rating. Every other NFL partner is down compared to the year-ago period.

The over-exuberance of debate ratings forecasts also failed to take into consideration how streaming would cannibalize the linear TV ratings. (Full disclosure: when Sports Illustrated's Richard Deitsch last week asked a clutch of sports-media types to predict how the first POTUS debate would fare in the Nielsen ratings, we lowballed it a bit, saying the event would draw 74.7 million viewers. Other professional numbers crunchers swung hard the other way, saying they anticipated the first verbal scuffle would deliver the kind of ratings you only ever see during the first Sunday in February.)

The next event on the debate slate is the first and only meeting between Ms. Clinton's running mate, Virginia Senator Tim Kaine, and Mr. Trump's second, Indiana Gov. Mike Pence. Set to air on Tuesday, Oct. 4, the 90-minute debate is expected to draw a fraction of the Clinton-Trump audience.