The Second Presidential Debate Summed up in 25 Tweets 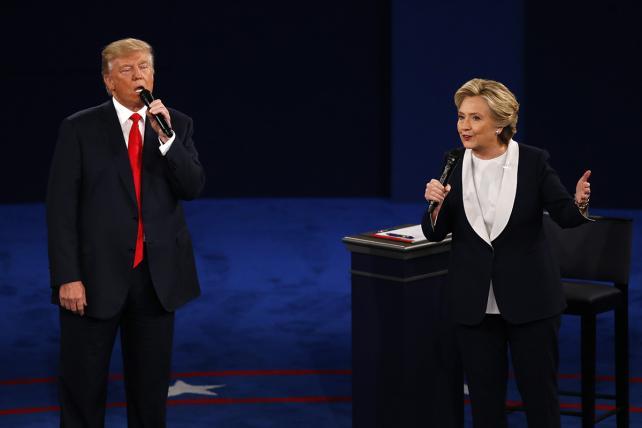 Who won the second presidential debate? Twitter! Despite all its recent troubles, the social media platform known for not being Facebook or Snapchat once again made the case that it's still America's essential real-time digital watercooler.

Of course, the Twittersphere obsessed about one candidate -- the orange one -- more than the other:

And the top three most-tweeted moments, according to Twitter? They were thanks to Trump, Trump and ... Trump.

Of course, Donald Trump had everyone talking even before the debate, thanks to his surprise livestreamed panel of Bill Clinton accusers.

Once the debate started, Trump supporters quickly began to declare that their candidate was winning, bigly, but at least one Republican -- former RNC Chairman Michael Steele -- had a different take barely half an hour into the show:

According to Twitter, the most retweeted tweet of the night came from "This Muslim American Life" author Moustafa Bayoumi, who responded to Trump saying that Muslims should report suspicious activity:

Among those threats: Trump's assertion that if he were in charge, Hillary Clinton would be in jail.

Trump's attempt to deflect questions about his #TrumpTapes scandal by talking about Bill Clinton also got the Twittersphere worked up.

For much of the night, Twitter obsessed about Trump's evasiveness -- and the eternal struggle of the debate moderators, Martha Raddatz and Anderson Cooper:

Trump chose to spar directly with the moderators, complaining that they were ganging up on him, and in cutting him off, not giving him enough time to respond.

Trump's pacing and posture throughout the night were definitely yuge topics of conversation.

Given the "town hall" format of the debate, the undecided voters on stage -- and their reactions, captured in screengrabs and gifs -- also prompted plenty of tweets.

And Trump's repeated attacks on Hillary Clinton for not fixing things -- tax laws, terrorism, etc. -- over her 30 years of public service also rankled.

According to multiple reports, the Democratic presidential nominee, Hillary Clinton, also participated in the debate. The Twittersphere made note of this when a fly landed on her face.

How did the debate moderators allow this to happen? And why didn't Donald Trump get his own fly? We're still waiting for answers.

Beyond the fly, other evidence that Hillary Clinton was on stage: She cited Abe Lincoln's political strategy -- and then Trump turned that back at her, saying that "Honest Abe never lied," unlike her.

Oh, and then there was that moment at the end, when audience member Karl Becker asked, "My question to both of you is, regardless of the current rhetoric, would either of you name one positive thing that you respect in one another?"

Trump went last ("She's a fighter..."), but it was Clinton's answer ("I respect his children...") that scored on Twitter.

Say, could someone please sum up the debate in 10 seconds?

OK, that's helpful, but 10 seconds is a long time to pay attention these days. Got anything a little shorter?