President Trump’s reelection effort is on an absolute tear when it comes to campaign advertising. Joe Biden’s? Not so much.

As Team Trump tries to course-correct in response to sinking poll numbers and eroding approval ratings—a couple of weeks back Trump demoted campaign manager Brad Parscale and handed the top job to Republican political operative Bill Stepien—one recent constant has been an abiding faith in the importance of traditional TV advertising.

What you need to know:

Of Team Trump’s advance bookings of $147.2 million for TV ads (broadcast and cable) set to air from Labor Day through Election Day, three out of the top 10 markets being targeted are in Florida: Tampa-St. Petersburg (Sarasota), Miami-Fort Lauderdale and Orlando-Daytona Beach-Melbourne. TV stations in those DMAs are set to see a windfall of $32.5 million thanks to the Trump campaign. Those tallies come from the latest Ad Age Campaign Ad Scorecard analysis—an ongoing project led by Ad Age Datacenter Director of Data Management Kevin Brown in partnership with Kantar/CMAG.

Hard on the heels of those Florida markets: Minneapolis-St. Paul, which will see $9.4 million worth of Trump TV ads from Labor Day through Election Day; Philadelphia, $9.3 million; Detroit, $7.7 million; Cleveland-Akron, Ohio, $7.3 million; Columbus, Ohio, $7.0 million; Phoenix-Prescott, Ariz., $6.9 million; and Charlotte, N.C., $5.9 million. It’s worth noting that in 2016 Trump carried all of the states these markets are in, except Minnesota, which suggests that at the moment Team Trump is scrambling to play defense more than offense.

As we’ve noted before, Ad Age Campaign Ad Scorecard tracks digital spending across Facebook and Google properties, but those platforms don’t offer much transparency about advance spending, if any, by campaigns. With traditional TV (and radio), we’re talking about finite inventory, so if you don’t buy now, you might pay more later.

What we do know is that all of Trump’s trackable campaign ad spending—past digital ad outlay across Facebook and Google properties, past TV and radio ad spending, plus advance TV bookings (Trump doesn’t appear to have pre-booked radio advertising set for Labor Day through Election Day, at least so far)—now adds up to a rather astonishing $307.4 million.

Some context: Remember Mike Bloomberg? He burned through $592.8 million on TV/radio/digital advertising before dropping out of the presidential race on March 4.

By comparison, Joe Biden’s campaign ad spending tally from the start of his campaign through July 22 comes to $85.6 million—and keep in mind that much of that outlay came during primary season, when assorted Democrat presidential wannabes had to burn through cash battling each other.

Though we’re not yet seeing formal advance TV bookings from Team Biden, the campaign made noise on July 21 about imminent spending plans: “Biden shelling out $15M as he steps up ad buys in key battlegrounds,” per Fox News (subhead: “The ads are scheduled to run in Arizona, Florida, Michigan, North Carolina, Pennsylvania and Wisconsin”).

We expect the Biden campaign to start writing more checks to continue to counter the Trump campaign’s fall slate of TV advertising. Here’s one additional piece of necessary context, via NPR on July 1, in the wake of the release of the respective campaigns’ fundraising disclosures on that day:

Despite a pandemic and the subsequent economic free-fall, Trump’s reelection campaign and the Republican National Committee announced...they had raised $266 million for the three months ending June 30, including $131 million in June alone.

A few hours later, Biden’s campaign and the Democratic National Committee announced that they had eclipsed Trump’s totals, bringing in $282 million during the last quarter and $141 million in June. 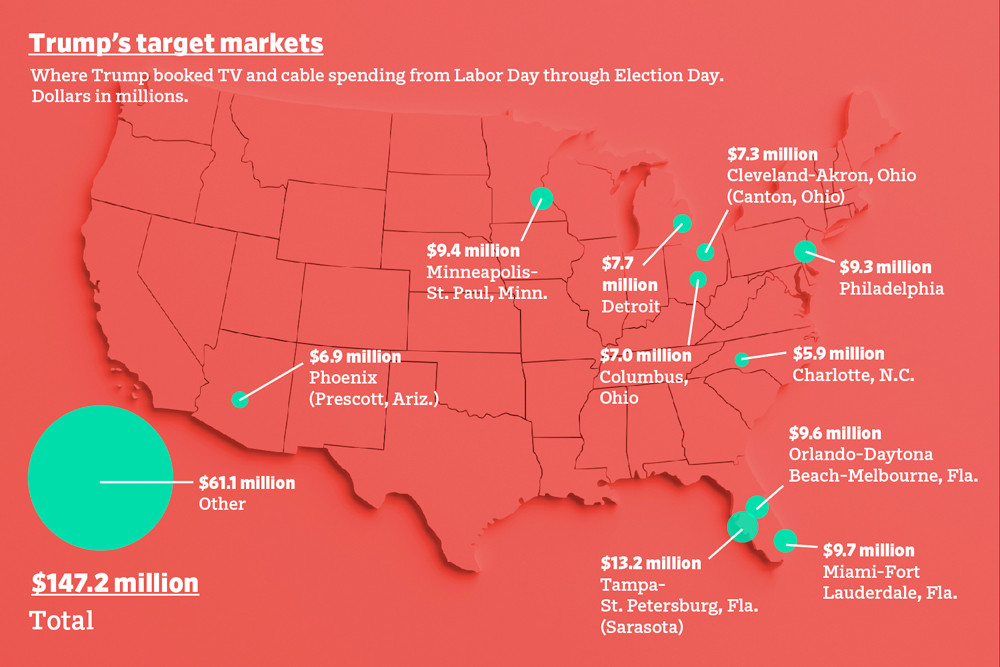