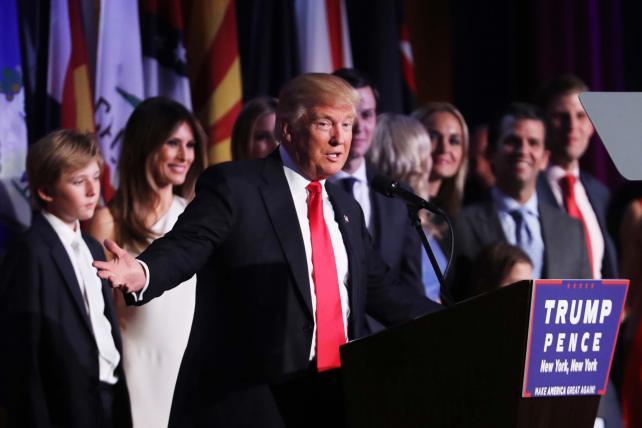 While much of the world grappled to understand the implications of Donald Trump's unexpected election to become the 45th president of the United States, marketers could already anticipate some likely effects.

Ad spending in general could be among the sectors affected if Mr. Trump implements the policies he advocated as a candidate.

"If trade barriers are generally raised with the United States, we would expect negative repercussions on the U.S. economy," said Brian Wieser, senior research analyst at Pivotal Research Group. "Given the tight correlations between economic health -- especially personal consumption expenditures -- and advertising growth, we would expect a downturn if new trade barriers are put in place."

Agency holding companies that are more exposed to international markets such as IPG, Omnicom, Publicis and WPP are in a relatively better position, Mr. Wieser said. In the media space, Discovery Communications has the most international exposure, while CBS is among the most exposed domestically.

"Uncertainty is one of the greatest barriers to investment," said Rino Scanzoni, chief investment officer at GroupM, the world's largest ad buyer, via email. "Companies and the market in general are not clear on trade and regulatory policy of the new administration. This will clearly impact short-term growth. Advertising spend will likely be negatively impacted until there is clarity on policy moving forward."

In response to the news, Martin Sorrell, founder and CEO of WPP, said: "Effectively a second Brexit that leaves many very surprised, including the markets and me, it's going to take a significant amount of time to assess the implications beyond the short term."

"Increased levels of uncertainty will mean more hesitation to make important decisions in the short term, both by people and governments," Mr. Sorrell added. "But it may accelerate implementation of helpful reforms in the medium term to reduce uncertainty and stimulate investment as a result."

"Clearly immigration, trade and terrorism were key issues that swayed electoral opinion in a very significant way, just as they did in the U.K., and probably will in the European referenda and elections to come," he continued. "There will now be a lot of reassessment, including of polling techniques. Electorates at times like these clearly don't like to be told how they're going to vote, especially by the media and other elites."

"One unsurprising event: Baby Sorrell was born on Election Day in New York. A welcome to a rollercoaster world," Mr. Sorrell concluded.

Beer and auto
The Trump win is also a potential negative for certain categories and individual marketers, such as Corona and Modelo Especial marketer Constellation Brands, whose beer sales could be hurt if his immigration policies are enacted. In a note to investors Wednesday morning, Evercore ISI said its demographics expert estimated that some 1.5 million undocumented Mexican immigrants could leave. Setting aside for the moment the impact on families and communities, Evercore noted that such an exodus "would likely hit demand" for Constellation brands because Mexican immigrants' beer capita consumption is about two times the general population.

During the campaign Mr. Trump also vowed to block Ford from opening a plant in Mexico and to levy big tariffs on Ford vehicles.

His victory could cause uncertainty in the broader automotive industry as well. Evercore ISI stressed Wednesday that "it is not 100% clear to us exactly what policies will be enacted by President Trump." But it did call the election result a negative for U.S. automakers in the near term. "Rhetoric around Mexican production, trade tariffs and a potential step-back in consumer confidence will likely weigh on stocks and auto demand, respectively," the firm said.

Not everyone agreed. Jack Hollis, group VP for marketing at Toyota Motor Sales, USA, characterized Mr. Trump's win as having a "neutral" effect on the industry. "People want to combine politics into the auto industry," he said. But "the auto industry has pretty much stayed on its course with ups and downs that are not politically based. They are economically based."

Mr. Trump is seen by marketing, advertising, and media association representatives in Washington as something of a wild card. He doesn't have the legislative history of Ms. Clinton, who served in the Senate for eight years. Dan Jaffe, who represents the Association of National Advertisers in Washington, told Ad Age on Monday that Ms. Clinton demonstrated her understanding of the importance of the industry during her time in Congress.

Chris Pedigo, senior VP-government affairs for publisher association Digital Content Next, predicted before the election that freedom of the press issues would become more top-of-mind during a Trump presidency. Mr. Trump has threatened to make it easier to sue journalists.

But as a whole Mr. Trump's election is a net positive for the ad industry, according to Dick O'Brien, who represents the interests of advertising agencies in D.C. as exec VP-government relations for the 4A's. "I think we in business can expect a more beneficial treatment than we might have had dealing with Secretary Clinton," Mr. O'Brien said Wednesday morning.

As president, Mr. Trump will appoint the chairmen of key regulatory agencies, including the Federal Trade Commission and Federal Communications Commission. Mr. O'Brien said he expects those appointees to be pro-business, like Mr. Trump, and to be generally less aggressive on privacy and labor issues than Ms. Clinton's appointees would have been.

AT&T and other internet service providers face new rules approved by a Democrat-led Federal Communications Commission, for example, prohibiting their use of data such as web browsing behavior without explicit consumer permission. An FCC under different leadership might revise those regulations.

But Mr. Trump is interested in reforming the tax code, and could potentially take aim at the 100% advertising deduction the industry values, Mr. O'Brien added.

While Ms. Clinton was favored in Tuesday's election, Mr. O'Brien said the 4A's mapped out scenarios for both a Democratic and Republican presidential victory, and will be sending a bulletin to agency members later Wednesday outlining what the election results could mean. The 4A's, he said, will be closely looking to see who Mr. Trump appoints to key positions, and will put together a game plan from there.

Media targets
Mr. Trump has also been vocal about his opposition to consolidation in the media, which he argued was rigged against him during the campaign. He has said that as president he would block AT&T's proposed acquisition of Time Warner and would also try to break up Comcast and NBC Universal. Comcast bought 51% of NBC Universal in 2011 and the rest of the company in 2013.

"As an example of the power structure I'm fighting, AT&T is buying Time Warner and thus CNN," Mr. Trump said Oct. 22 as the pact was announced, "a deal we will not approve in my administration because it's too much concentration of power in the hands of too few."

AT&T Chief Financial Officer John Stephens said at a Wells Fargo conference Wednesday morning that the company is looking forward to working with Mr. Trump and is optimistic that regulators will approve the deal.

"His policies and his discussions about infrastructure investment, economic development, and American innovation all fit right in with AT&T's goals," Mr. Stephens said. "We've been the leading investor in this country for more than five years running, and our Time Warner transaction is all about innovation and economic development, consumer choice, and investment in infrastructure with regard to providing a great 5G mobile broadband experience. So we look forward with optimism to working with the leadership and providing benefits to consumers and to our shareholders."

Mr. Trump has also been at odds with Amazon founder Jeff Bezos, whom he says has a huge anti-trust problem with the ownership of The Washington Post.

Mr. Trump's win also squelches rumors surrounding a Trump TV network. At the very least, it looks like Fox News won't have to contend with a new competitor.

Among tech companies, Twitter seemed to be one of the few companies unscathed Wednesday morning. After electing perhaps the first Twitter-obsessed president, the stock was rising on Wednesday, up 4.4%. Meanwhile, peers Google, Facebook, Apple and Amazon were all down. It could help that Twitter proved that it was still a force in media during the election season.