From Lifetime to Fox News, an Unusual Media Battleground Shapes Up for Election Night | Ad Age
Skip to main content

From Lifetime to Fox News, an Unusual Media Battleground Shapes Up for Election Night 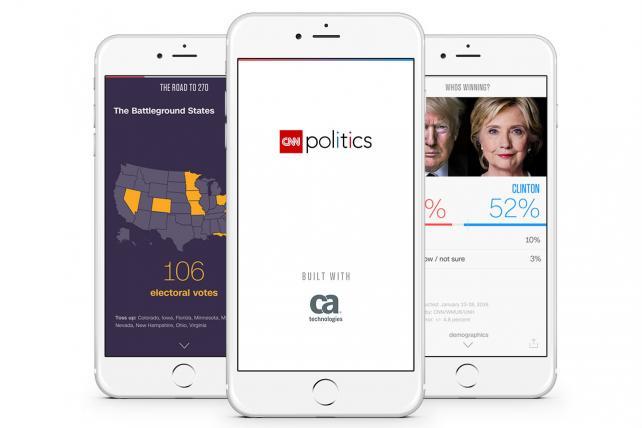 The CNN Politics app, one of countless ways to follow election results on Tuesday night.
Credit:

On Tuesday, we will finally reach a conclusion to an election season that can only be described as a roller coaster -- if that roller coaster constantly threatened to dump riders into the dirt-clearing killzone from the recent season premiere of "The Walking Dead."

But the battle between Donald Trump and Hillary Clinton has repeatedly made for jaw-dropping TV, so it's no wonder that not only traditional news networks and publishers are gearing up for the climax, but unexpected players as well.

News stalwarts will of course provide minute-by-minute coverage, but the battleground of election coverage will be more crowded than ever. With more platforms from which to go live, chat and post, Nov. 8 promises an onslaught of election streams, gifs and memes.

Perhaps one of the more unusual networks that will be seeking eyeballs on election night is Lifetime, which is partnering with ABC's talk show "The View" for a primetime special. The two-and-a-half hour-episode will feature "View" co-hosts from their set with a live studio audience, presenting election-themed Hot Topics, interactive election activities and results from key battleground states. "The View Live Election Special" begins at 9 p.m. ET.

Viacom's MTV wants to be the home for millennial voters on election day, planning to report from its "Total Request Live" studio, re-dubbed "The People's Playhouse." The studio will be home to an on-site watch party, election confessional booth, replica of the Oval Office and animal cams, where puppies will serve as MTV's election-night pollsters, whatever that means exactly. MTV and its sibling channels MTV2 and mtvU will cut to MTV News every hour starting from 3 p.m. and will go live as soon as the president-elect is named. On Facebook, MTV News will bring back its old "10 to the Hour, Every Hour" rubric for live updates starting at 6:50 p.m. ET and continuing throughout the night. Each segment will focus on specific issues like climate change, reproductive rights, immigration and the economy. MTV News will also be live on YouTube starting at 6:50 p.m., and all of the network's social media accounts will provide updates.

Comedy Central's "The Daily Show with Trevor Noah" will go live for an hour on election night starting at 11 p.m. timeslot. The Viacom-owned channel will follow that with the first-ever live episode of "@Midnight," where host Chris Hardwick and panelist Whitney Cummings, Ron Funches and Paul F. Tompkins will react in real time to the best blow-ups and melt-downs on social media. In primetime, Comedy Central will air politically-themed episodes of "Tosh.0" and "Drunk History."

Complex News plans to use YouTube to live-stream coverage on Tuesday night from the YouTube Space in New York. Common will also perform. Hearst and Verizon earlier this year bought Complex Media, the culture and music publisher founded in 2002 by designer Marc Ecko.

BuzzFeed will live-stream election-night coverage on Twitter, working with Decision Desk HQ, a volunteer-based election tracker started under the conservative Ace of Spades blog, to make calls on the race. Twitter will sell ad packages for the election coverage, offering mid-roll spots, as well as sponsorship opportunities for original news clips produced by BuzzFeed. Twitter and BuzzFeed will share ad revenue.

Funny or Die has promised coverage starting at 1 p.m. ET on Tuesday, with "special guests, roving reporters, commentary, and so so much more."

Fusion will be hosting a roast on election night. It's partnering with All Def Digital to roast America, the entirely country. Hosted by Romany Malco, it will feature a slate of comedians who will provide "a humorous and irreverent look at how some are grasping with the insanity of this moment in our nation's history." The network will also provide live election results throughout the night.

The Young Turks, the political commentary web series, will stream live from its Los Angeles studio on YouTube, Facebook and Twitter simultaneously starting at 1 p.m. ET. It will air for a minimum of 10 hours, pending results.

NowThis, which makes news video with social platforms in mind and interviewed President Obama earlier this week, plans a 12-hour "unapologetically fun" Facebook livestream hosted by comedian Jordan Carlos. The feed will include recaps of earlier coverage and party games such as Election Cards Against Humanity, NowThis said. "We're bringing our audience of young voters just what they need and on the platform they want it -- live coverage all day on Facebook," said Tina Exarhos, chief content officer of NowThis, in a press release. "They can view while in line at the polls or on their way to work."

Ozy and Wired are teaming up to present live election night coverage from a popular Washington, D.C. restaurant. The event will stream on both publishers' sites, as well as Facebook Live from 6 p.m. to about midnight. The publishers promise instead of "endlessly repeating talking points" they will offer "a fresh and fascinating conversation with dozens of the most interesting thinkers, politicos, entertainers, musicians and comedians."

In addition to pre-empting regular programming on the ABC broadcast network Tuesday night, ABC News will live stream on Facebook. Coverage will be led by George Stephanopoulos, marking his first election night as the chief anchor. He will be joined by Diane Sawyer, David Muir and Charles Gibson, who is coming out of retirement for the night. Michael Strahan will be in Time Square getting public reaction, while Robin Roberts will report from Hillary Clinton's headquarters and Amy Robach from Donald Trump's. Prognosticator Nate Silver from FiveThirtyEight, part of ABC sibling ESPN, will be on-hand to provide predictions and analysis. ABC will also air a special edition of "Nightline" from 2 a.m. to 4 a.m. ET.

NBC News and MSNBC deliver non-stop coverage on election day. Lester Holt, Savannah Guthrie and Chuck Todd will headline coverage for the peacock, with Tom Brokaw serving as an analyst. Once again, Rockefeller Center will light up in red, white and blue and a map of the United States will also be superimposed on the iconic skating rink to mark the progress of the candidates. Rachel Maddow, Brian Williams and Chris Matthews will lead MSNBC's primetime coverage. Coverage will live-stream on NBC News and MSNBC's sites, as well as the NBC News YouTube channel starting at 4 p.m. The stream will also be available on NBC News apps and over-the-top-streaming platforms.

CBS News has seven hours of evening election coverage planned starting at 7 p.m. ET, not counting reporting during "CBS This Morning," and is touting its roster of journalists who will rotate throughout the day. Scott Pelley, Norah O'Donnell, John Dickerson, Gayle King, Charlie Rose, Elaine Quijano and Bob Schieffer will lead the coverage. It will begin airing coverage on its over-the-top news channel CBSN starting at 6 a.m. ET.

The Fox News cable network will be going wall-to-wall on its election coverage starting on Sunday, kicking off with he unveiling of its new studio during "Fox News Sunday with Chris Wallace." Megyn Kelly and Bret Baier will headline coverage on election night. Fox News will provide real-time data through its website and mobile app to allow users to drill down to individual state and county-level races. There will also be a digital live blog.

CNN's coverage will be led by Wolf Blitzer, Jake Tapper, Anderson Cooper and Dana Bash. All of CNN's coverage will be live-streamed on its website and app. CNN's politics app will will do a deep-dive on data and exit polling. The network will also utilize a bevy of social platforms, like Facebook, Kik and Snapchat throughout the night.

The New York Times will drop its online paywall from Monday through Wednesday to provide unfettered access to its political coverage. The Times will also host a live stream on its Facebook page starting at 4:30 p.m. ET as well as a call-in show hosted by The Run-Up podcast. It is even selling $250 tickets for an election-night event at its headquarters where attendees will hear from editors, reporters and company CEO Mark Thompson before adjourning to an open bar.

And as you might expect from C-Span, the network and its radio and digital extensions will run wall-to-wall coverage inlcuding speeches, viewer calls, social media comments.

For those who've already had enough or can't stand the suspense, however, there will be shelter from the storm: Weather Channel on Tuesday is offering a solace for people who want to escape the election, promising only clouds, rainbows and autumn splendor. The network will air a nine-hour marathon starting at 3 p.m. ET featuring beautiful, awe-inspiring and calming weather video designed to instill tranquility.