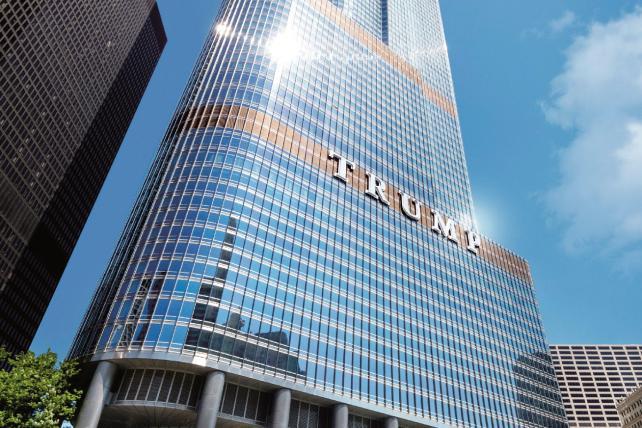 Throughout his presidential campaign, Donald Trump has promoted his namesake business, holding events at Trump-branded hotels and golf courses from Scotland to Florida. As the race approaches its conclusion amid a torrent of controversy, his company is launching a new brand that won't carry his name.

Scion, a line of hotels that will target younger clients, was unveiled last month in a press release that quoted three different Trump Organization executives, but not the candidate.

Since entering the race last year, Trump has offended groups including Mexicans, Muslims, the disabled and veterans. A video from 2005 that showed him bragging about making lewd advances on women prompted almost a dozen to say he'd harassed them -- claims that he strongly denies. Those associations will make corporate clients less likely to book Trump-branded properties, said Bruce Himelstein, a former chief marketing officer for Loews and Ritz-Carlton hotels.

"He's now a polarizing figure. When he was putting his hotels together, he wasn't," said Mr. Himelstein, now a consultant. "There's definitely an impact."

His campaign has already reeled. A candidate that as recently as three weeks ago was in a close race is now waging an uphill battle to close a gap that's grown to 5.9 percentage points nationally, according to a RealClearPolitics poll average.

Enter Scion. The new brand is planned for use at city and resort locations, Trump Hotels said when Scion was announced Sept. 28. The new hotels are intended to appeal "to a new and different type of guest in more locations around the globe," Trump Hotels said.

The Scion flag won't replace the Trump brand, according to Trump Hotels. It was announced more than a week before the Washington Post published a 2005 video of Trump bragging about grabbing and kissing women. Trump Hotels said it will continue to expand its namesake properties, which include its new Washington hotel. The grand opening of that property, located five blocks from the White House, is scheduled for Wednesday. Trump Hotels are luxury properties, a tier above where Scion is aimed.

"We chose this name as a nod to the Trump family and their tremendous business successes, including Trump Hotels," Eric Danziger, chief executive officer of Trump Hotels, said in an email. "We want to acknowledge the association with Trump in a genuine way, while allowing the new lifestyle brand to stand on its own."

Scattered evidence suggests travelers are choosing to check in elsewhere. It's hard to measure the impact on Trump Hotels of his most inflammatory comments or the allegations of unwelcome sexual advances. The Trump Organization doesn't disclose occupancy rates.

Bookings at Trump hotels through luxury-travel specialist Ovation Vacations tumbled 29% in the past six months, said Jack Ezon, president of the firm. While corporate reservations at Trump Hotels through Altour International Ifell 10% this year through Oct. 15, leisure bookings rose so much they provided a 16% lift overall, said Martin Rapp, senior VP at the corporate and leisure travel agency, which has a large number of entertainment clients. After all, more than 13 million Americans voted for Trump in the primaries.

Trump Hotels is hardly the first lodging company to introduce a new brand aimed at younger customers who may be turned off by older names that can be seen as stodgy. Marriott International started Moxy, Hilton Worldwide Holdings has Canopy, and Starwood, acquired by Marriott last month, added the Aloft brand. The hotel operators are dealing with competition from travel alternatives such as the home-sharing company Airbnb.

In fact, competition from new hotels may be a problem for Scion, said Piers Schmidt, founder of London-based consulting firm Luxury Branding. The new brand diffuses the very things that draw customers to Trump: the image of a billionaire full of brashness and bling, he said.

Trump's "track record is build it tall, build it loud, promote it hard, fill it with people and create this kind of lifestyle -- the jets, the towers, the hotels," Mr. Schmidt said. "There is a litany of new lifestyle brands that are chasing after the millennials."

The Trump Organization has eight hotels in the U.S. and seven in other countries. Its U.S. properties include the Trump International Hotel Washington, D.C., housed in the 1899 Romanesque Revival-style Old Post Office on Pennsylvania Avenue, and its foreign properties include the Trump International Hotel & Tower Vancouver, which is under construction. During his run for the White House, Trump gave reporters an April tour of the then-unfinished Washington hotel, held a post-Brexit event at Trump Turnberry in Scotland, and in September returned to the D.C. property to renounce previous claims that President Barack Obama wasn't born in the U.S. -- after first boasting about his new hotel.

Last week in Las Vegas, where Trump went up against Democratic candidate Hillary Clinton in their third and final debate, Rita Solon, who volunteered for her first Republican campaign in 1980 and came from Washington, D.C., to watch the event and make fundraising calls on Trump's behalf, said she thinks that his candidacy is hurting his businesses.

"His brand was very valuable," said Ms. Solon, wearing a Trump-Pence pin in the lobby of the Trump International Hotel Las Vegas. "The family is making a tremendous sacrifice with his brand. He's hated and reviled."

On Manhattan's Upper West Side, residents are protesting at three rental apartment buildings called Trump Place, signing a petition saying, "Dump the TRUMP Name," the New York Times reported Monday. Lobby rain mats with the candidate's name are being replaced, as are uniforms worn by doormen and concierges. "If the name comes off, the building will lose tremendous value," Hope Hicks, Trump's press secretary, told the newspaper.

Trump's new Washington hotel has been hit with graffiti and protests. "All of my friends refuse to come here," said Peter Gebre, a resident of suburban Maryland who was dining with his wife and son at the hotel's restaurant to celebrate his 21st wedding anniversary earlier this month. "It does have an impact."

The Washington hotel also is offering discounts from its pre-opening minimum prices, with rooms advertised for later this month as low as $404, compared with the starting rate of $625 initially set by Trump. October is typically one of the busiest months for Washington hotels.

"It's really disappointing to see they're charging such low prices for all they said how good they are and how they would come in and crush everybody," said David Bernand, general manager of the Four Seasons in Georgetown. "You only harvest what you plant."

Trump Hotels said rates fluctuate for several reasons including market conditions and the $404 rate doesn't provide an accurate picture of the property's success since its Sept. 12 soft opening. The opening "has been the most successful in terms of opening bookings, interest from groups and large events" in his 10 years with Trump Hotels, Mickael Damelincourt, managing director of the new Washington hotel, said in a statement.

Other hotels have been hurt by politics or their owners' behavior. The Sultan of Brunei had a similar problem in 2014, when his swank Beverly Hills Hotel was boycotted after the kingdom implemented Islamic criminal laws that call for death by stoning for gay people. Among the events moved from the Sunset Boulevard property was the Feminist Majority Foundation's Global Women's Rights Awards, and Richard Branson and Ellen DeGeneres said they wouldn't stay there.

Then, slowly and rather quietly, the elite began to return -- because they like the place. But the Beverly Hills Hotel is a one-of-a-kind trophy with a decades-long history before the Sultan of Brunei bought it in 1987. The property doesn't bear the sultan's name, and the controversy wasn't followed as closely as Trump has been during his presidential campaign.

Still, some believe that for Trump, who has been putting his name on everything from steaks to neckties and cologne for more than 30 years, any blow to his business could also be fleeting. The candidate has thrived through multiple bankruptcies, the flop of his Trump Shuttle airline and the demise -- in a swirl of litigation alleging illegal business practices, denied by Trump -- of his eponymous for-profit university.

"Six months after the election, everyone will forget it," said Jason Awad, a venue planner in suburban Washington. "He's very resilient."

Even if the Trump name does suffer long-term, there's no guarantee that Scion, which means "descendant of a notable family" -- Donald Trump's children, Donald Jr., Ivanka and Eric, are all Trump Hotels executives -- will prove a worthy alternative. After all, it's not the first time the name's been used for a youth-oriented brand. With sales falling, Toyota Motor ended its use of the Scion brand two months ago.