How Much of The Jetsons' Futuristic World Has Become a Reality? | Ad Age
Skip to main content

How Much of The Jetsons' Futuristic World Has Become a Reality?

The show was futuristic in its own right: When it bowed in the early 60's, it was the first color show to ever air on ABC. But it was the quirky technological advances that the Hanna Barbera show imagined human beings using -- from robot maids to flying cars -- that really formed the backdrop of the show and kept viewers interested.

In honor of The Jetsons' 50th anniversary, we decided to take a look to see how far we've come. And based on where we are so far, by 2062, the year the show is set in, we may just achieve all that the show's writers envisioned and then some. One thing that's massively important to us today and wasn't reflected that way on the show is our powerful mobile phone technology and the importance to us of how small those devices have become, as well as what they permit -- constant access to the internet (not conceived back then) and a variety of useful apps. 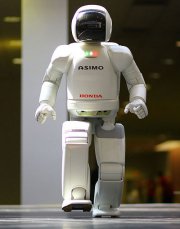 Robots... Rosie, the maid, is a robot and robots are regularly used on the show to complete daily tasks, such as cook & clean and help the characters get dressed.

Honda's Asimo is the most advanced robot to date, as it can walk, talk and interact with humans. Such devices are becoming more popular when it comes to housekeeping too, particularly with robotic vaccums such as the iRobot Roomba. 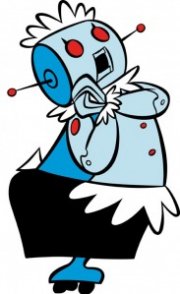 Short workdays ... George Jetson would regularly complain about his three-hour workdays at Spacely Sprockets, where his main responsibility was to repeatedly push one button on a large computer.

...In 2012In the U.S. especially, workers are toiling longer than ever, prompting the American Journal of Epidemiology to report the findings of a study that showed the effects can mean premature heart problems. Many European countries have banned working for more than 48 hours a week.

Trips to the moon... Jetting off to the moon is no big thing, and in one episode Little Elroy travels there on a Cub Scout trip.

...In 2012 Richard Branson is set to start offering "suborbital flights" via Virgin Galactic, with several successful test flights completed, while NASA is partnering with Elon Musk's SpaceX for commercial missions. There's also a Spaceport in New Mexico, which is just about complete and ready to host tourists who want to go into space.

Flying cars ...In the future, we wouldn't drive on roads, but in the air, the show predicted -- in little aerocars with see-through bubble tops.

...In 2012 Engineers have been trying to get there for several decades, but as Popular Mechanics has reported, we're closer than ever. The latest model is the Terrafugia Transition, which can get up to 62 mph on the road, with its rear wheels driven by a horizontally opposed four-cylinder Rotax 100-hp engine. Of course the price tag is steep, somewhere around $230,000.

Video chat...Rather than simple phone calls, the characters are regularly seen using video chat, whether it be Jane speaking with her family or George getting an unwelcome call from Mr. Spacely.

...In 2012 In this area, we seem to have already surpassed the expectations of the Jetsons. Video chat tools such as Skype, Google voice, Facetime and Logitech are regularly used in business and at home. And what's more, their use isn't confined to a single monitor but can be used from mobile devices. For many, it would be difficult to imagine life without seeing colleagues or loved ones speak to you in real time.

In probably the best-known episode of the show, Judy wins a date with her heartthrob, singer Jet Screamer, after a contest.

...In 2012 Pop idols are just as relevant as ever today. Women's lifestyle blog ChipChic made an awesome comparison to our very own Justin Bieber. "There will always be a need for teen idols, something Jet Screamer was more than happy to provide in one of the early episodes. This was an example of innovation in the real world, too -- the brief music video for 'Eep, Opp, Ork, Ah Ah,' which is mostly made up of graphics of the lyrics flashing on screen along with Screamer dancing and singing, was an early version of the modern music video, long before MTV even existed. Also, the catchphrase ('Baby, baby, baby!') and the name makes Jet Screamer almost prophetic in yet another way."

Floating cities... Buildings in the Jetsons' era were not near the ground; they could be raised below or above the clouds as a way of dealing with the weather.

...In 2012 Floating cities today aren't being envisioned in the air, but as buildings that float on the open sea. While not in use yet, prototypes are being drawn to help deal with overcrowding in cities on land. Like the Seascraper (shown left).

Jane's electric dress...In one episode, Jane purchases a dress that can be lit up if it is plugged into a wall socket.

...In 2012 She's done a meat dress, worn 3-D glasses, used tabloid newspapers for clothing, and made an outfit out of Kermit dolls, so it's probably about time that Lady Gaga wore a light-up dress. Well, actually there was that one time she was outfitted for pyrotechnic breasts. Does that count?

Human cloning... George decides that with the help of science, he can create another George to go to work, while the other one can relax at home.

...In 2012 It was around the time of the Jetsons that human cloning was first being debated as a real possibility, and many laws around the world ban the practice. Dogs and sheep have been cloned and there is much interest in bringing extinct animals, such as the Wooly Mammoth, back to life using intact cells.

Vacuum tube transport... Rather than taking elevators or climbing flights of stairs, workers are beamed up super quickly using tube transport on the show.

Like flying cars, tube systems were actually something being dreamed about back in the day of the Jetsons, with some engineers sketching out how trains using this technology might look. The BBC reported this summer that teams in the U.S. and China are currently working on the concept of such transporters, designed to hurtle through tunnels that have had all of the air sucked out of them. Right now, scientists are predicting that these could theoretically hit speeds of up to 2,500 miles an hour. That would make the commute from North America to Europe just 60 minutes rather than six hours via plane.