Here's one more, hitherto unthought-of use for Microsoft's Kinect technology. The Kinect Sign Language Translator project is a research prototype that hopes to turn sign language into spoken language, and the other way around too -- and do it all in real time, while you're having a conversation. Kinect will capture the gestures, while pattern recognition programming will interpret it.

The Verge reports that Glass wearers are beginning to see an accessory store where accoutrements for the device are available, from protective shields to carrying cases to mono earbuds. None of those come cheap -- the clear shield to protect Glass is $75. The store also makes reference to a new upcoming sunglass accessory. In other news, a California driver was awarded the first-ever ticket for driving while wearing Google Glass.

A Smartphone With Healing Powers

No more cracked phones -- at least, not for long. LG's new G Flex phone has been unveiled, and the device boasts what the company is billing as a self-healing coating on the back. While it sounds like the stuff of sci-fi, self-repairing tech has been around for a few years, but don't work as well as they should -- they can only repair themselves after sustaining minor injuries. Businessweek spotlights the work of polymer scientist Marek Urban of Clemson, who is hoping to take self-repair to the next, Wolverine-esque level.

After Robot Turtles comes yet another project that wants to help teach kids as young as five to code. Play-i is the brainchild of former Googler Vikas Gupta, who has built two expressive robots, dubbed "Bo" and "Yana," who can help young kids to program and code, via an iOS app. But is coding a fundamental skill for kids -- as important as reading, or writing? 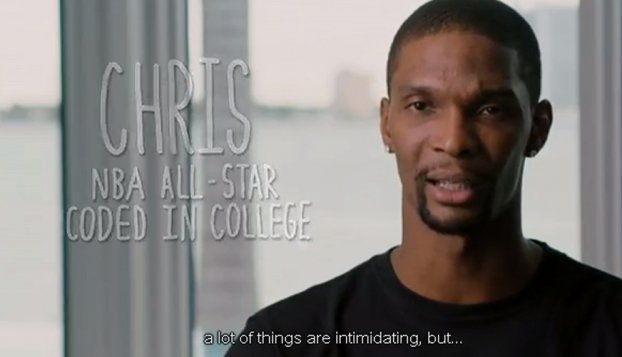 Miami Heat's Chris Bosh might seem like an unlikely choice to pen an editorial about coding, but that's exactly what the basketball star has done. In Wired, Mr. Bosh writes about why he himself has been playing around with code for a while now, and why he sees it as a necessary skill. Previously, the player appeared in a video for nonprofit Code.org, speaking out about the benefits of coding.