How does your dog think? Dognition, an innovative new startup backed by North Carolina agency McKinney and its incubator, McKinney Ten Percent, is out to unlock the mysteries of your pooch's brain. The paid service, which went live earlier this month, lets dog owners put their pets through a series of brain puzzles that will help them understand how their pet thinks, and also, for the first time, pave the way for data that will unlock the mysteries behind cognitive traits of different breeds.

For example, a sample game/puzzle asks you to lay down two treats at arm's length from yourself, then point to one. Depending on which treat is eaten first, your dog may be an independent thinker or a collaborative one. After doing a series of puzzles, Dognition will provide a report on who your dog really is, and then will help you come up with ways to communicate with it. It will also connect you with experts if you have questions, then show a snapshot of where your dog fits within the company's database -- what the agency calls "citizen science," aggregating results for further canine scientific research.

The startup went from conception to launch in just five months, and was developed around the fundamentals of canine cognition research, via partnerships with professors like Duke University's Dr. Brian Hare. The research is based on work done by the Duke University Canine Cognition Center, which is led by Mr. Hare. He recently coauthored "The Genius of Dogs: How Dogs Are Smarter Than You Think," which was published the same day Dognition launched in beta. The site works along with the book. Whenever Mr. Hare told anyone what he does for a living, people would ask for tips about their own dog. The business idea stemmed from what Becky Minervino, CMO at Dognition calls an "unmet consumer need intersecting with a credible, science-based solution."

In exchange for equity, McKinney's TenPercent incubator, which asks agency talent to devote 10% of their time to creative projects beyond their docket, worked with Dognition to create the design, look, feel and user experience of the site. McKinney, meanwhile, acts as the agency of record, to provide marketing strategy, research and promotional development. 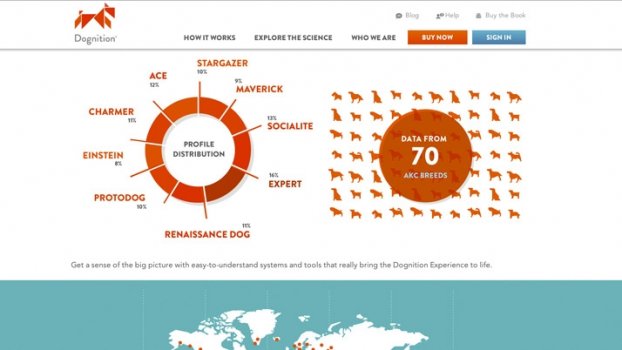 The incubator was launched about two years ago, said Jim Russell, who is the chief innovation officer at the agency. He is also a board member of Canines Inc., the company behind Dognition, a role he held before the startup launched. "While people may think of North Carolina as a flyover state, fact is that it's actually number four for venture capital investments, and also has a lot of talent due to the University of North Carolina and the Research Triangle Park nearby," he said. "That led to a lot of startups and ventures that asked if we could help them."

Those requests led to McKinney spin-off Red Square Ventures, a venture partner that is working with both Dognition and TenPercent to grow the startup.

Meanwhile, TenPercent has already hatched a number of innovative projects, including Chip It, a site for Sherwin Williams that let you analyze pixels in any image and match to one of 1,500 paint colors from the brand. That idea was thought up by McKinney copywriter Stevie Archer, during her TenPercent time.

More recently, there was the awesome Beercade, for Raleigh-based Big Boss Brewing Company, a beer-dispensing old school arcade game that dispenses brewskis when you win. While the idea is limited to the one machine for now, the client now plans to take the idea to beer festivals and bars.

Dognition's CEO, Kip Frey, is a professor at Duke and a venture capitalist and entrepreneur. He teamed with Mr. Hare, and approached Red Square Ventures for support in getting a product out into the market quickly, said CMO Ms. Minervino.

The team at McKinney and Dognition say that the market for pet products is big -- expected to generate $50 billion in total spending this year. It is also expected to grow 33% over the next five years, according to market research firm Mintel. Because most pet owners consider pets as part of the family, the pet industry has responded with specialized franchises like "The Dog Whisperer" and other dog psychology services. However, argues Ms. Minervino, the Dog Whisperer implies he has a "special gift" that others don't have. Dognition makes no such claims, she said. "We believe in everyone participating in science-based discoveries can help us improve our relationships with dogs. We are all equal in the eyes of science," she said.

McKinney also interviewed dozens of owners and fielded an online survey, then, created a customer profile using Simmons customer profiling to identify that there is a customer group large enough to build a business -- a "standard part" of how McKinney works with clients, said Mr. Russell.

Naming the company Dognition, and filming training videos, creating a design for the site, all came from McKinney staff, said Mr. Russell. Now, they operate like Dognition is a client, and going forward, will be responsible for marketing it going forward. "In the startup world, you're not dealing with perfection, but just 'perfect enough'," he said. "That's very different and liberating for our staff, and might not happen with our other clients, although that way of working will eventually spill-over to our traditional clients."

Broadly speaking, the canine category seems to be quite fertile when it comes to agency IP projects. Former Lowe Roche Toronto COO Geoffrey Roche and his son Alexandre have, through their agency Poolhouse, developed "Dogbook," a social network for dogs, a community with over 3.5 million members that has an iPhone and iPad app, check-in features and more. Toronto's Rethink also invented the Dog Caller, a collar that alerts owners when temperatures get too high for their dogs to safely sit in cars.