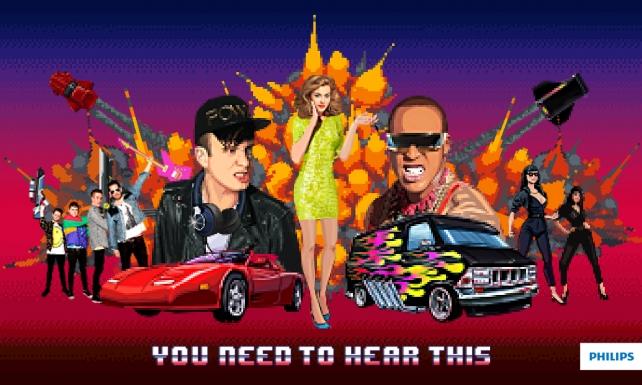 It's hard to dispute that the king of headphones is Dr. Dre, with his uber-popular Beats by Dre that can be seen over the ears of hipsters, influencers and other cool kids. But Philips is hoping to get in on some of that action with its own brand of listening gear, the Citiscape Headphones -- and a decidedly retro-cool digital campaign that mashes up music video and video game.

Created out of Ogilvy London, "You Need to Hear This," targets to the 18- to 24-year old set and is set to electronica band Swiss Lips' new track, "Carolyn." The site invites consumers to play a totally '80s 16-bit style online driving game that, in the end, becomes a music video for the song.

Users play the band's lead singer Sam, who is battling the evil "Flame Gang" to win the affections of his true love, Carolyn. As they set out to save her, they fall straight into that era of cheese -- with its fast cars, neon colors and a bad guy who looks like a cross between Mr. T and MC Hammer. Each road leads to a different outcome -- from a cruise along the beach, to a drive through a bustling metropolis, to an underwater expedition to a detour into the tummy of a whale.

And, it's not always a happy ending. Chris Joakim, associative creative director and copywriter at Ogilvy London, said that while the plot is simple, the multiple endings keep you guessing. "Sometimes you save the world, sometimes you don't," he said. "And other times, there are zombies."

There's also a social aspect: Philips will unveil secret codes on its Facebook page in the coming weeks that will give you more audio upgrades in the game when you type in brand names from its headphone line.

Seven "Audio Worlds"
But most important is the actual audio experience. Ogilvy decided to create a game knowing that it would sound much better on headphones -- computer speakers tend to generally distort audio. The agency worked with production company Unit9 to create the game, as well as its seven different "audio worlds." At each fork in the road, players can change the track. Heading to the beach will turn it into a more samba-type sound, while going to the moon gives it a retro, spacey vibe. As for the zombies, ramming into the undead when they appear creates a sound -- and Mr. Joakim said "hitting them in the right pattern actually creates a good beat."

Even changing lanes is its own audio experience: moving from left to right triggers the same effect with the music from ear to ear, a sonic element that only can be appreciated with headphones.

Of course, you could use any old headphones -- from Beats by Dre to little iPod earbuds -- to experience the campaign. But AJ Coyne, an account manager at Ogilvy, said that sales wasn't the aim. "The goal is to get onto the 18 to 24-year-old's radar and demonstrate Philips as a credible brand," he said.

The producer on the campaign, Marc D'Souza, said the biggest challenge was the sheer amount of content in the production -- with seven "worlds" and 15 sections in a branching storyline that leads to multiple endings. "This production pushes the technical limits further than any of our previous productions," he said. "Thus, it's the current state of the art."

Unit9 interactive artists Dawid Marcinkowski and Kasia Kifert -- also known as the Kissinger Twins -- said the idea was to keep even users with short attention spans focused on the game. In an interactive project, it's important to keep a storyline intact -- which is where the director comes in. "There are hundreds of choices, decisions, many paths and branches that the user could take," said Mr. Marcinkowski. "It's the role of the director to build a balanced storytelling world."

And why the heavy '80s influence? Sure, everything retro is cool right now -- just take a look at the resurgence of Zubaz pants, white pumps and denim worn head-to-toe. It doesn't hurt that Swiss Lips has an '80s vibe to its music, and the song is about driving in a car, which lent itself perfectly to an "old school driving game," said Ogilvy ACD Mike Donaghey. Mr. Joakim also explained the culprits behind the '80s revival are the content creators themselves, himself included, who grew up in the '80s and '90s. "If it were up to us, every ad we made would probably have a DeLorean and Clear Cola worked into it," he said.