Maybe they should call it Function Week.

Celebrities, designers, editors, bloggers and brands descending on New York's Fashion Week Feb. 6 are being treated not just to the latest in clothing styles but technology. Ever since Vivienne Tam created a special edition HP notebook in 2008 for Fashion Week, tech has played a bigger role on and around the runway.

"There's a push to closely align technology with fashion," said Rachel Arthur, global senior editor of digital media and marketing at WGSN, which is one of the major b-to-b players that susses out fashion trends for designers and retailers. Ms. Arthur, in fact, said her team is doing more real-time reporting on trends at CES and SXSW in addition to Fashion Week.

"We were inundated with [client] requests for coverage at CES," said Fiona Harkin, senior VP-content at forecasting firm Stylus, which has been diversifying its roster beyond fashion to include technology, automotive and food and beverage brands. This past year there was a "real dedicated focus on the intersection of fashion and technology," she said.

Last year, one of Fashion Week's big stars was Google Glass, which was sported by Diane Von Furstenberg's models and fashion influencers in and around the week's events.

Glass is also making an appearance this year thanks to Women's Wear Daily, which is using it to report on the goings-on via video and interactive content. According to Pete Born, executive editor-beauty at WWD, four beauty editors are using their own Google Glass at the 50 fashion shows the publication will attend this week. "We have a reporter go back stage and interview the makeup stylist and the hair stylist and we ask them about trends. We ask them what their idea of their look is for that particular show," said Mr. Born.

Conde Nast's Lucky magazine treated 15 of its Instagram followers to a meetup at Mercedes-Benz Fashion Week, where they joined Editor-in-Chief Eva Chen for a peek behind the scenes at the action.

Wearables
Attendees are also keeping a sharp eye out for wearables on the runway. A number of events, like the recent Decoded Fashion meetup that Apple hosted at a store in London, are "indicative" of the trend, which is also tied to a "bigger market for wearables," said Stylus' Ms. Harkin.

Sponsor Samsung this year is partnering with Swarovski to create a crystal-encrusted cover for the Galaxy Note 3 that will be sold bundled with a crystal bracelet at the Swarovski store on Fifth Avenue for $299 for a limited time. The company is also hosting a Galaxy Lounge inside the Fashion Week lobby at Lincoln Center for designers and VIPs to hang out before and between shows. 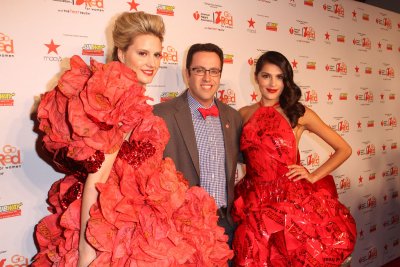 Getty Images
Jared Fogle with Subway ambassadors in dresses made solely of Subway napkins and wrappers at the Go Red for Women The Heart Truth Red Dress Collection 2014.

Some more traditional Fashion Week tie-ins with a digital twist are coming from retailers like JCPenney and Macy's. The former is hosting two Twitter chats to talk trends. On Feb. 6, Macy's sponsored the American Heart Association's Go Red For Women/The Heart Truth Red Dress Collection to raise awareness that heart disease is the No. 1 killer among women. The event, held at the Theatre at Lincoln Centre, showcased 20 celebrities -- including Joan Jett, Taryn Manning, Lindsey Vonn and Colbie Caillat -- walking the runway wearing red dresses specially designed for the event.

Official sponors
For those who couldn't attend Fashion Week, American Express partnered with Bulldog Digital Media to livestream Ms. Von Furstenberg's runway show, including a Q&A with the designer, as part of a yearlong partnership celebrating the 40th anniversary of her iconic wrap dress.

Tresemme is now in its 12th year as official Fashion Week hair-care sponsor, a period dating to well before Unilever's 2009 acquisition of the brand from Alberto-Culver. This season, Tresemme created a two-story salon and lounge offering guests personalized styling via a digital library of runway looks. After visitors make their selections, they get QR codes to access step-by-step instructions to re-create their desired styles at home. At another salon at Lincoln Center they can book appointments for styling touch-ups.

Tresemme launched a digital web series, "Style Setters," in 2012 that follows the brand's stylists and provides an insider's look at what goes on behind the scenes during the shows. This season, it's supporting the series through a media partnership with Conde Nast in print and online, featuring style expert Louise Roe, photographer Candice Lake and blogger Rachel Parcell.

L'Oreal's Maybelline, the official cosmetics sponsor of Mercedes Benz Fashion Week, is sponsoring eight runway shows, but declined to elaborate on its on-site plans. Fashion Week is largely an all-year affair for the brand, which last year created a video about the makeup trends identified in its work with models at last fall's event.

High-fashion tissues
Diet Coke, which signed on as a new Fashion Week sponsor this year, on Feb. 7 launched a social- media contest asking consumers to share their "On Moment" on Instagram or Twitter for a chance to win prizes including invites to the event. Meanwhile, Coca-Cola's Smartwater brand is plugging itself as the "official hydrator" of Fashion Week, with plans to put hydration stations near tents and VIP areas.

Perhaps the oddest collaboration is from Kleenex. The Kimberly-Clark brand, which recently launched a partnership with designer Isaac Mizrahi to design a collection of facial tissue and hand towel boxes, is among those seemingly non-traditional brands that wants to be involved in Fashion Week. The brand will be participating in the Panasonic Beauty Bar, celebrating its 90-year anniversary and history of design. The brand, along with model, fashion columnist and former star of The Real Housewives of New York City Kelly Bensimon will showcase "trendy designs" on its Slim Pack line "as a fashion-forward accessory," a spokeswoman said.