READ THIS NEXT
In this vintage ad for Wate-On, a promise to help 'skinny' girls put on pounds

As depicted in "Battle of the Sexes," about the legendary rivalry between Billie Jean King and Bobby Riggs, BJK challenges the United States Lawn Tennis Association over its ginormous gender pay gap—and founds a breakaway tournament. Its future, at first, is highly unfunded. Saving the day, the group's female manager, puffing away at a news conference, announces a sponsorship deal with Philip Morris' new "libber" cigarette brand, Virginia Slims. 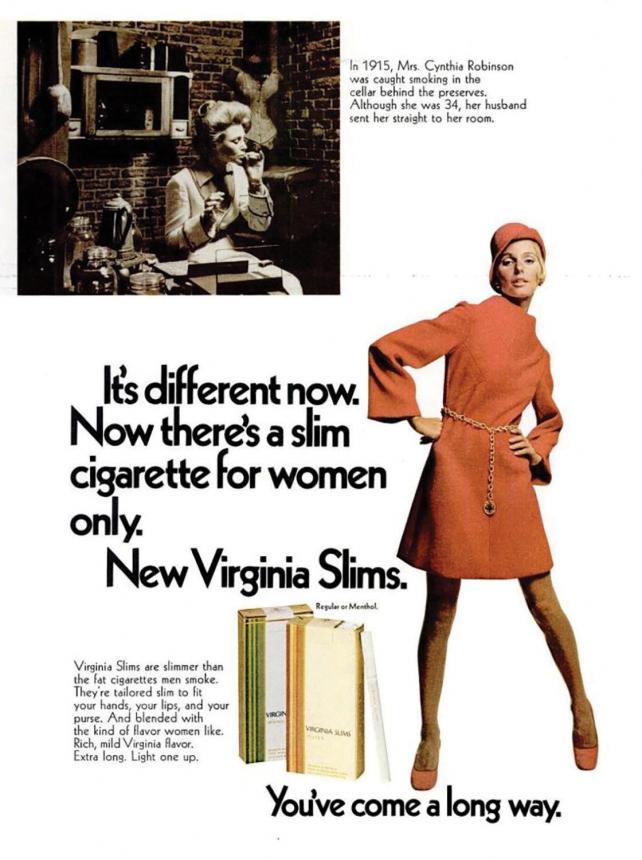 Thus the Virginia Slims Circuit was born. In spite of the obvious contradiction of marrying smokes to championship athletics, it was a genius move. The brand launched in 1968, boasting a rebel spirit in its signature jingle: "You've come a long way, baby, to get where you've got to today." Print and TV ads from Leo Burnett, the agency that created the Marlboro Man, showed a proper, shirtwaisted Victorian wife hiding her tobacco habit from her husband, before cutting to a stylish, animated modern woman. Though Philip Morris was co-opting Gloria Steinem-era feminism, the breakthrough ads seemed more aspirational and fashionable than political—a new, nonthreatening form of liberation. (Liberation lite?)

The brand enjoyed phenomenal growth through the 1990s, until it faced competition from newer brands and younger smokers rejected the old-libber message. The cig was made longer and thinner, and the "long way, baby" line was updated to "It's a Woman Thing."

The Virginia Slims Circuit merged with the USLTA to become the WTA tour, and Philip Morris folded into Altria. The latter still sells many varieties of Virginia Slims, but these days, no brand would ever dream of linking feminism or independence to smoking tobacco. So, yeah, we've come a long way, dude.