READ THIS NEXT
In this vintage ad for Wate-On, a promise to help 'skinny' girls put on pounds 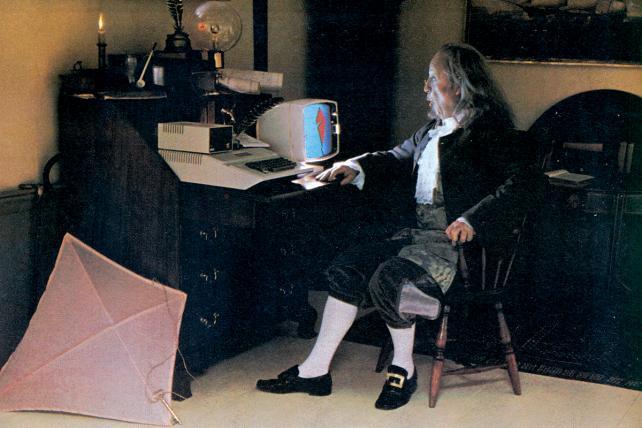 Oh, I don't know, maybe the kind of man who dresses up as Benjamin Franklin?

The great man is shown staring into the color monitor of the Apple II, a boxy, putty-colored machine that really was a personal computing marvel. But you'd hardly know that from the copy's "revolution" puns like "Declare your independence with Apple."

The other revolutionaries in the campaign included Thomas Edison and Orville Wright. Apparently, the agency, Chiat/Day, never thought of including women—or people of color.

Certainly, there were operatic highs and lows during Apple's early years, and that goes for its marketing too. Founded in Steve Jobs' manger, I mean garage, Apple's original logo was a drawing of Sir Isaac Newton looking like a terrifying 17th-century tarot card of death. The original all-type print ad looked like it was selling patent medicine in the 1890s.

By the early 1980s, the company had thousands of employees with profits quintupling every quarter. And of course, four years after this "What kind of man?" insurance salesman-like series started running, Apple released the Macintosh.

To introduce it, the "1984" spot from Chiat/Day was powered by a platinum-haired woman in running shorts taking a sledgehammer to a video image of Big Brother. Apple had declared its own independence by tearing the pants off labored clichés of the past.

By contrast, the agency's "Think Different" campaign of 1997 said in two words and a single image (using a pool of diverse human geniuses) what this campaign was unable to convey in thousands of words, bad puns and cheesy costumes: "Think Different" (a jab at IBM's "Think" ) was as simple, creative, understated and powerful as the machines themselves.