During this busy travel season, take a moment to remember a hotel visionary
READ THIS NEXT
In this vintage ad for Wate-On, a promise to help 'skinny' girls put on pounds

If you check into a Holiday Inn this travel season, give a thought or two to Kemmons Wilson, a Memphis, Tennessee, homebuilder who took a vacation in 1951 that would alter the American landscape for decades. 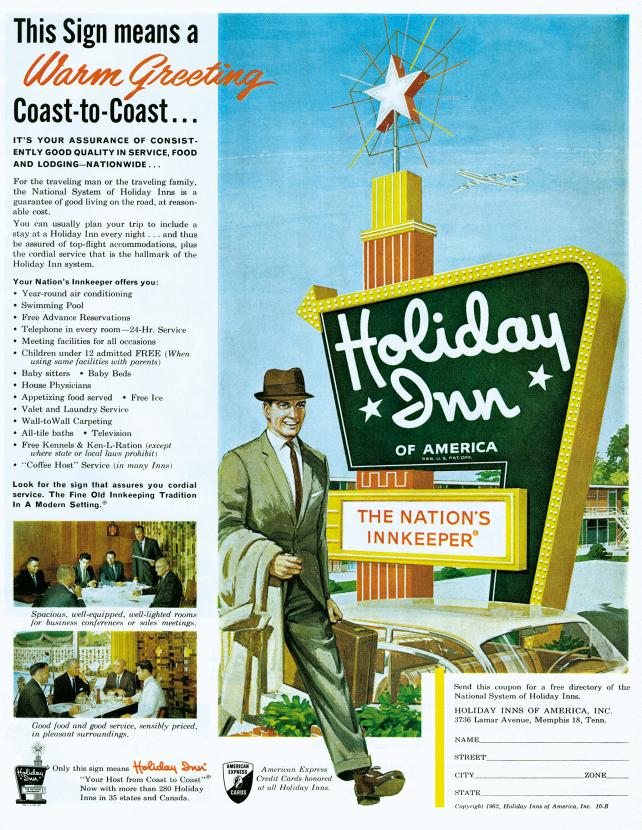 Following a road trip in which he was appalled by the state of roadside motel rooms and furious at having to spend $2 extra for each of his five children, Wilson vowed to start a motel company of his own. A year later, the first Holiday Inn—named after the 1942 Bing Crosby movie of the same title—went up in Memphis. By the time this ad ran a decade later, there were "more than 280 Holiday Inns in 35 states and Canada." Hilton may have been the first hospitality company to span the contiguous United States, but Holiday Inn was arguably the first mass-produced affordable lodging.

The real star of this 1962 ad, though, is the "Great Sign," as it was known in-house. The first one, built by Balton Sign Co., cost $13,000 to erect and would be the motel's only advertising for several years. The gigantic, 50-foot, lit-up roadside sign gradually began dotting the country as the chain started to expand. "This Sign means a Warm Greeting Coast-to-Coast" the copy reads.

By the time this ad came out, the sign was already symbolic of a postwar boom in family wealth and travel. Here, a dapper Don Draper-type struts into the scene, beaming at the promise of "The Nation's Innkeeper." He is guaranteed year-round air conditioning, a swimming pool, a telephone in every room, even house physicians and free kennels. All clean, all ultramodern. The 1,000th outpost would open in 1968, ensuring a consistency of quality and a uniformity of service—the McDonald's of hotels.

In 1982, though, the Great Sign was ditched in favor of smaller, cheaper signage in keeping with the changing times. According to historian Caitlin L. Horton, Wilson called the decision "a hell of a mistake."