How CorePower Yoga Stretches Its Resources to Maximize Branding

With Goal of Becoming First Truly National Yoga-Studio Chain, Burgeoning Company Powers Expansion Through Digital and Word-of-Mouth Marketing
READ THIS NEXT
How D-Wave made a quantum leap in brand perception

How ambitious is CorePower Yoga? Founder Trevor Tice makes a Starbucks comparison within the first five minutes of talking about his company. Howard Schultz "created the coffee culture in America," he said, referring to the Starbucks CEO. "And we're doing that with yoga."

In other words, the Denver-based company wants to build the first truly national yoga-studio chain, just like Starbucks transformed the once-fragmented coffee-shop industry.

A yoga studio on every corner? Well, not quite. But the expansion-blueprint is aggressive, with plans to grow to 75 studios from 65 by the end of 2012 and to 118 by 2015. New markets this year will include Austin, Texas; Washington, D.C.; and Seattle, joining communities in Chicago, Honolulu, Minneapolis-St. Paul, Portland, Ore., and cities in California and Colorado.

CorePower, founded in 2002, is already the nation's largest yoga chain. But that 's not saying much in a field that has been dominated by mom-and-pop players. CorePower's share of the $6.5 billion yoga- and pilates-studio market is still only 0.5%, but better than that of Dahn Yoga & Health Centers and YogaWorks. Together these players command less than 0.5% of the market, according to a recent study by IBISWorld.

Mr. Tice's optimism is fueled by the fact that yoga, once a niche activity, continues to edge its way into the mainstream. According to Yoga Journal's forthcoming 2012 "Yoga in America" study, 20.4 million Americans now consider themselves yoga practitioners, a spike from 15.8 million in 2008.

CorePower's growth plan is rooted in making yoga accessible and friendly, as well as offering a consistent experience across the chain, meaning you could take classes in Honolulu and Minneapolis and not notice much of a difference. Each venue incorporates a similar design—a front counter, locker rooms and usually one or two studios.

Core classes are ranked in difficulty, from 1 to 3, and follow a power Vinyasa style, in which participants move quickly from one pose to the next, resulting in a regimen that is more aerobic than spiritual exercise. Or as Mr. Tice said succinctly, "It kicks your ass."

In the past, many Americans may have thought "that yoga is all stretching and sitting around and humming and meditating and chanting," he said. "That is not what our yoga is all about. That does not mean we don't integrate components of that . But it's certainly not the central aspect of our yoga." 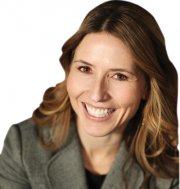 The way Mr. Tice sees it, too many yoga styles are built around the "cult of personality," such as Bikram, named for Bikram Choudhury, the Kolkata, India, native who began spreading his style of hot yoga in the 1970s. CorePower, by contrast, "is not a person. It's a brand," said Mr. Tice, who seeks to "ditch the dogma."

Added Mr. Tice: "We are not there to preach. It's a secular practice. There is no connection to religion."

As much as CorePower emphasizes its brand, the company spends very little on traditional branding, eschewing TV and print ads for word-of -mouth and digital marketing. For instance, staff might invite to a class people from "like-minded businesses," such as the manager of a Whole Foods, in the hopes that they will tell others, said Marketing Director Holly Georgelos, who joined in 2006 after a stint at Gap Inc. The company has offered services via Groupon discounts and has dabbled with advertising through Google's AdWords service and microtargeted ads on Facebook.

CorePower also relies on trial enrollments, offering a free week of classes to anyone who signs up. After that , prices vary by region. In Illinois, a single class costs $20, while a set of five sessions costs $95 and an unlimited monthly pass runs $175.

What it skips in media spending, CorePower makes up for with its careful site-selection process, using demographic research to choose the ideal spot within dense urban areas populated by its target market of professionals age 25 to 35. The company also pumps in as much as $1 million to build out each of its locations, equipping them with showers and climate-controlled studios and stocking them with amenities like CorePower-branded soap and shampoo .

Each site offers classes virtually anytime during daylight hours. On a recent Monday at one Chicago studio, a class began nearly every hour, starting at 6 a.m. and concluding at 8:30 p.m.

"To not feel like a beginner, you've got to have some sense of "I'm becoming good at this sequence, and therefore I'm enjoying myself.' And we want to keep that student feeling successful," Ms. Georgelos said.

I've practiced yoga on and off for a few years—but never heated yoga. So during a class at CorePower's original studio in downtown Denver, I could tell the difference immediately. Next to me, Ms. Georgelos gracefully moved through poses. I was, well, less graceful, but got through most poses except for a headstand, the splits and something called a wheel pose that involves for bending the body into an upside-down U, a formation I just wasn't going to try to replicate.

Instructors are taught to be encouraging but not demanding. That pretty much fit Marta, who led our class. "I could do this all day long and so could you," she said as we did the Mountain Climber, shuffling each foot forward while in a plank pose. "Once you stop trying, you stop struggling," she told us.

By the end of class, the speakers were piping U2 and Marta was spraying a refreshing mist throughout the room. By then, all I wanted was a shower and an iced tea, maybe from Starbucks.

How D-Wave made a quantum leap in brand perception

How Verint juggled a spinoff and rebranding amid the pandemic

How Bynder rode outbound sales out of startup phase