General Mills Is Selling Strawberry Cereal for Spring, Followed by Pumpkin Spice This Fall
READ THIS NEXT
5 takeaways from the ANA’s ‘human’-obsessed virtual Masters of Marketing event
Pumpkin Spice Cheerios is a fall limited edition flavor and will launch around Labor Day.
Credit: General Mills

General Mills, looking to reinvigorate its flagship Cheerios brand after years of sluggish sales, is taking inspiration from Starbucks.

The food marketer is introducing a pumpkin spice version of Cheerios later this year, tapping a flavor that gained cult status at coffee houses before appearing in everything from vodka to Jell-O. It's a rare foray into limited-time flavors for Cheerios, a brand that has suffered from an industrywide U.S. cereal slump.

General Mills is counting on pumpkin spice and other innovations to help reverse five years of declining sales. Though the family of products are still the best-selling cereals in the U.S., they were hit hard by a shift away from the breakfast food -- especially among millennials. Sales of regular Cheerios, a 75-year-old brand, have slipped 18% since 2010.

Executives at the company think they've turned a corner. General Mills introduced gluten-free Cheerios last year, appealing to the growing number of Americans who avoid the ingredient. The brand's sales were down just 0.8% in 2015, the best performance in at least five years, according to research firm IRI. General Mills expects the category to return to growth as early as this year, said Jim Murphy, who runs the cereal division at the Minneapolis-based company.

"There's nothing fundamentally wrong with cereal," Mr. Murphy said in an interview with Bloomberg. "We just have to keep it relevant." 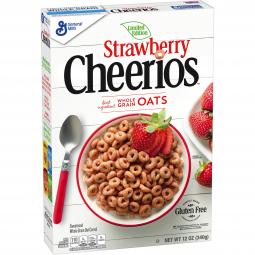 The variety of Cheerios has grown over the years, but limited-edition flavors have been rare. One past example was when General Mills released Millenios in 1999 to celebrate the new millennium. This year, the company is doing two: strawberry Cheerios, which have already started to hit store shelves, and the pumpkin spice flavor, due to appear around Labor Day.

General Mills and Kellogg Co. have both updated their products to cope with shifting tastes, but the days of cold cereal dominating breakfast in the U.S. are probably over, said Ken Shea, an analyst at Bloomberg Intelligence. Fast food's push into breakfast and the emergence of snack bars and Greek yogurt as viable morning meal options have eroded cereal's appeal, he said.

"It goes beyond the supermarket -- breakfast in general has gotten intensely competitive," Mr. Shea said.

In that environment, it takes something novel to stand out. Starbucks' pumpkin spice latte, or PSL for short, has become an autumn ritual for customers. Pumpkin spice products also have spread to store shelves and restaurant chains such as Dunkin' Donuts, McDonald's and Panera.

The cereal industry has staged successful turnarounds before, Mr. Murphy said. Sales fell in the 1990s, when bagels got hot, but they came back. And there was another slump a few years later during the Atkins diet craze. With the current downturn, Mr. Murphy thinks General Mills has adjusted its products enough to win back consumers.

In addition to going gluten-free, General Mills launched Cheerios Protein last year. The company has also removed artificial flavors and colors from most of its cereal portfolio. Sales of the revamped brands, including Reese's Puffs and Golden Grahams, were up 6% in January and February -- after falling 6% in the previous fiscal year.

"Cereal has been killed off three or four times," Mr. Murphy said. "It's incredibly resilient."