A-B InBev Looks to Replace Budweiser With 'America' on Packs 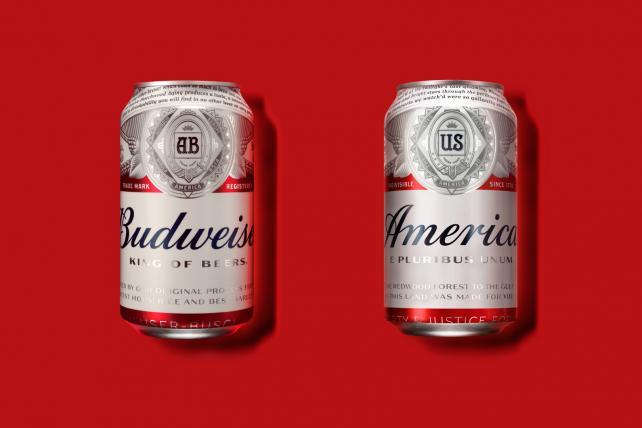 Budweiser is replacing its brand name on certain packaging this year with 'America.'
Credit: Anheuser-Busch

Update: A-B InBev on Tuesday, May 10, confirmed the limited-edition label change, saying "America" would replace "Budweiser" on the front of 12-oz. cans and bottles. The packaging will run from May 23 through election season in November, the brewer stated. The agency that handled the design change is Jones Knowles Ritchie, New York. The packaging will be accompanied by a summer-long campaign called "America is in Your Hands." A national TV spot featuring the cans and bottles will premiere on June 1.
~~~

Budweiser, which has dressed bottles in stars and stripes in previous summers, could be poised to make one of its biggest patriotic plays yet. The brand has sought approval for new labels that replace the Budweiser name with "America," according to a filing with the Alcohol and Tobacco Tax and Trade Bureau.

The labels don't stop there. They include phrases such as "E Pluribus Unum" and "from the redwood forest to the Gulf stream waters this land was made for you and me," as well as "indivisible since 1776."

A Budweiser spokesman declined to comment on the labels.

Budweiser, which is owned by Belgium-based Anheuser-Busch InBev, has a history of using patriotism in marketing. Last year, limited-edition packaging included an image of the Statue of Liberty. The brew has also used stars-and-stripes on can designs in recent summers.

But replacing "Budweiser" with "America" -- even for a limited time -- would supercede previous attempts at patriotic marketing. In a recent interview, Anheuser-Busch InBev U.S. Marketing VP Jorn Socquet declined to comment on Budweiser's summer package design plans. But he foreshadowed Bud's summer marketing by suggesting the brand would make use of the Olympics and Fourth of July celebrations, as well as the Copa America soccer tournament that will be played in the U.S.

"You have this wave of patriotism that is going to go up and down throughout the summertime," Mr. Socquet said. "And we found with Budweiser such a beautiful angle to play on that sentiment."

Budweiser is an official U.S. Olympic Games sponsor. The brand recently stated that a number of Olympic athletes would appear in a new ad slated to premiere in June and run during the Olympics broadcast on NBC. Budweiser also stated that it is "creating a branded and editorial content series that tells the inspiring stories of Team Budweiser athletes, which will premiere in June."