Bob's Burgers and Blue Apron: A partnership too gouda to be true | Ad Age
Skip to main content

Bob's Burgers and Blue Apron: A partnership too gouda to be true 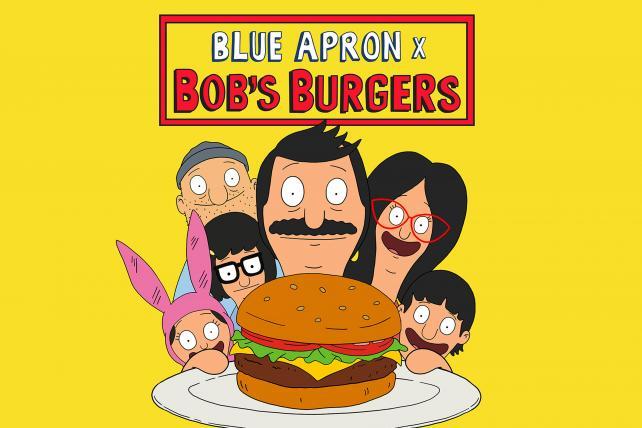 Three burger recipes straight from the show's family restaurant are coming courtesy of Blue Apron, the meal prep service, in July, August and September. Two recipes have previously been featured on Bob's Burgers episodes (specifically, the Quantum of Salsa Burger and the Gouda Wife Burger). The Absentee Shallot Burger will make its debut on the show's ninth season premiere on September 30.

The collaboration comes at a time when Blue Apron's fortunes have flagged; it has been leapfrogged by Hello Fresh, which is now the No. 1 meal delivery kit company in the U.S. Blue Apron deliberately pulled back on marketing in late 2017, causing first-quarter revenue to drop 20 percent.

Blue Apron teamed up with model/cookbook author/all-around social media superstar Chrissy Teigen earlier this summer for a series of six meals, in a similar effort to boost revenue. While stock prices have bumped up slightly since the May collaboration announcement, shares are still low at $3.22 as of publication time, down from its initial public offering price of $9.34 one year ago.

For the Bob's Burgers collaboration, recipes were developed by Alvin Cailan, chef at L.A.'s Eggslut and previous Bob's Burger's pop-up restaurants in L.A. and N.Y.C.

Blue Apron will also be collaborating with apron and workwear brand Hedley & Bennett for a Belcher-themed apron, available in August. Portions of the proceeds during the month of September will go to Feeding America.

CORRECTION: An earlier version of this article said that Hello Fresh was the No. 2 meal kit company in the U.S.; it is currently No. 1. We regret the error