It will be the first net-zero carbon certified arena in the world
READ THIS NEXT
NFL Playbook: Tracking how brands are marketing around an uncertain season 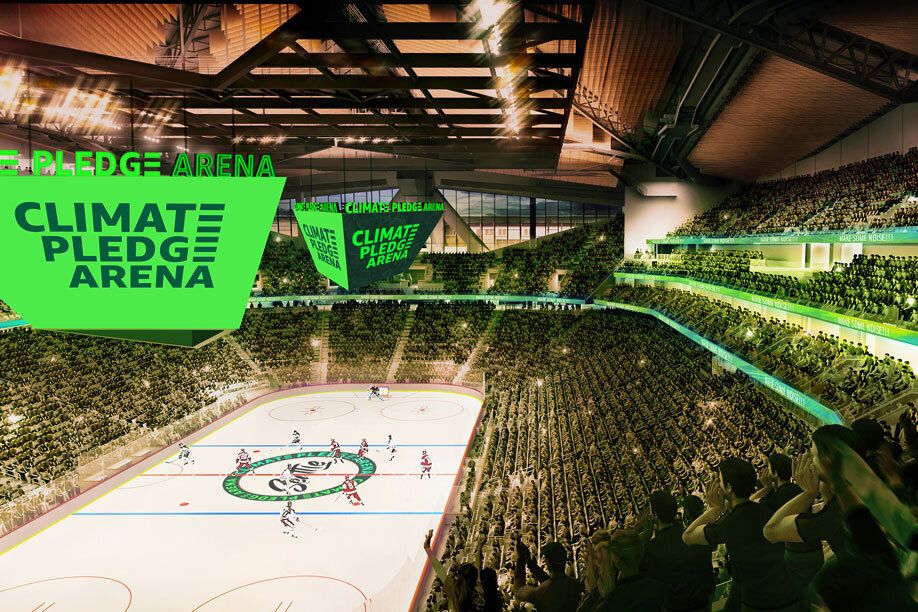 Amazon.com Inc. bought the naming rights to Seattle’s KeyArena, the new home for the city’s expansion hockey team and the WNBA’s Seattle Storm, but the company isn’t putting its own name on it.

The venue will be called the Climate Pledge Arena, a nod to Amazon’s push to get companies to have net-zero carbon emissions by 2040. It unveiled the pledge last year, which requires businesses to reach the goal a decade ahead of the Paris Agreement.

The stadium will be the first net-zero carbon certified arena in the world, Amazon CEO Jeff Bezos said in a post on Instagram. The site will “generate zero waste from operations and events, and use reclaimed rainwater in the ice system to create the greenest ice in the NHL,” Bezos said.

The site was developed in partnership with Oak View Group and the as-yet-unnamed Seattle National Hockey League franchise. The team is slated to take the ice in the 2021-2022 season. The arena, which first opened in 1962, is being extensively renovated -- in part to make it eco-friendly.

“Everyone loves to talk about being carbon-neutral, but it’s really hard and really expensive,” said Tim Leiweke, CEO of Oak View. “We’re spending tens of millions of dollars on this. We’re trying to set a precedent others will follow.”

Leiweke said he was inspired by musicians such as Billie Eilish, who have pushed for arenas to reduce their carbon footprint by reducing plastic and embracing renewable energy.

The sports venue will be entirely powered by renewable energy, in part with solar panels. Tickets to NHL and WNBA games will double as free public-transit passes, and fans will be encouraged to take Seattle’s refurbished monorail.

Leiweke reached out to Amazon early on about getting involved with the arena, seeing as the company is the largest business in the city. Amazon was at first reluctant since it didn’t need help promoting its name, he said, but came around to the focus on climate.

Amazon services will be also integrated throughout the area, including in the technology used for food and beverage and parking. “Amazon will be everywhere,” Leiweke said.

The arena also has the space to accommodate a team from the National Basketball Association, should that league choose to return to Seattle.The Seattle SuperSonics moved to Oklahoma City before the 2008-2009 season, leaving one of the largest cities in the U.S. without an NBA team.