From Nike to KFC, America's top brands sweat over next step in trade war | Ad Age
Skip to main content

From Nike to KFC, America's top brands sweat over next step in trade war 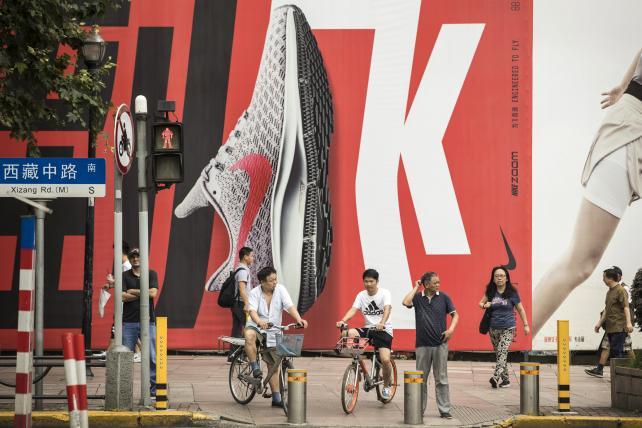 America's corporate bosses could be excused if they don't agree with President Donald Trump's boasts that a trade war is "easy to win." They can just reflect on the levers of pain China pulled against South Korean-owned businesses last year to imagine a state-nudged boycott against Starbucks or shutdown of Nike's factories.

China vows to retaliate against all U.S. tariffs but hasn't announced a response to Trump's proposal to put duties on another $200 billion in Chinese imports next month. Since that's more than the value of all U.S. exports to China, the Asian nation will need more than tit-for-tat tariffs to punch back.

If China employs a similar strategy to the one used when its neighbor installed a missile defense system—shuttering stores and factories owned by South Korean companies and stoking boycotts—a slew of U.S. brands could pay dearly. That's because China is both an essential supplier and also the biggest growth market for many U.S. companies.

Here's a rundown of some of the brands with a lot to lose:

Just last year, China showed that it wasn't afraid to poke Nike when a program on state-run television criticized it for false advertising. That's troubling for the world's largest sports brand because consistent growth in China stabilized Nike Inc. when it struggled to fend off competition in the U.S. Revenue in China surged 21 percent in the past year to $5.13 billion, growing to 14 percent of Nike's total sales. Meanwhile, revenue in North America declined about 2 percent. And China is a major supplier, too, producing about one-fifth of its goods.

The coffee chain counts the U.S. and China as its two key markets. Last year, China was "a standout," posting 7 percent same-store sales growth, Chief Executive Officer Kevin Johnson said. Starbucks Corp. expects strength to continue with an accelerated expansion plan that will add 600 stores a year to hit 6,000 by 2022. But there are already signs of weakness in the country, with sales at existing stores declining 2 percent last quarter.

Starbucks is also more exposed than other U.S. restaurant chains because it owns most of its stores in the country, rather than selling franchise rights. But that may also shield it from a backlash because it's seen as a good employer and founder Howard Schultz travels to the region often for public events.

The world's largest restaurant chain has been in China for almost three decades and now has about 2,600 locations there. The company did reduce its exposure to the country last year, selling its China division for $1.7 billion to an investor group that includes state-backed entities.

But McDonald's Corp. did maintain a 20 percent stake, which means it's still a valuable source of revenue growth. The new owners plan to almost double the number of locations in the next five years. But that will come amid a recent slowdown in the business, with customer visits declining over the past several months.

While China is one of the beverage company's biggest markets, Coca-Cola Co. did recently reduce exposure there by divesting its bottling operations. It doesn't break out sales from the country but has consistently called China one of its best growth markets. For many years, the company's Sprite brand was tops in China.

The toymaker is looking to China to help revive growth, including entering a partnership with e-commerce giant Alibaba Group Holding Ltd. last year. It also recently reached a deal to open learning centers in the country with a local partner that will integrate its brands, including Fisher-Price, into the curriculum. Mattel Inc., which also makes the Barbie and American Girl properties, last year said its China business could quadruple by 2020.

Yum China Holdings Inc., the operator of KFC and Pizza Hut restaurants in China, was the target of anti-U.S. protests just two years ago, and it's easy to see why. The spinoff of Yum! Brands Inc. runs the country's biggest network of fast-food restaurants, with 8,200 outlets.

Any pressure from the government would add more difficulties for Yum China. Pizza Hut has been struggling and KFC unexpectedly saw flat same-store sales last quarter as younger diners turn to domestic chains and healthier options. A consortium that includes KKR & Co., Hillhouse Capital and Chinese sovereign fund China Investment Corp. are said to back a potential takeover of Yum China.

While many U.S. brands have been reducing risk in China, Michael Kors Holdings Ltd. in 2016 acquired direct control of its business there from a licensee. The division included more than 100 stores and about $200 million in revenue. The move was seen as a way to offset slowing sales in other regions. The luxury purveyor also makes a lot of its goods in China, with one manufacturing partner accounting for 20 percent of its products.

The chain's owner, Restaurant Brands International Inc., has big plans for China. CEO Daniel Schwartz recently said the country will be the focus of its global expansion plans. The company is also taking its Tim Hortons brand to China with plans to open more than 1,500 locations there. "We're excited about China," Schwartz said on a recent call with analysts.

The shoe and handbag brand sources more than 90 percent of its goods from China, meaning any kind of serious disruption to its supply chain would have a huge impact. And while China is a small market at this point for Steven Madden Ltd. -- it generates 90 percent of its revenue in the U.S. -- the region is a source of growth.

"Long term, we remain very optimistic about the opportunity there," Steve Madden CEO Edward Rosenfeld said last month on a call with analysts. "We're going to ramp up marketing."