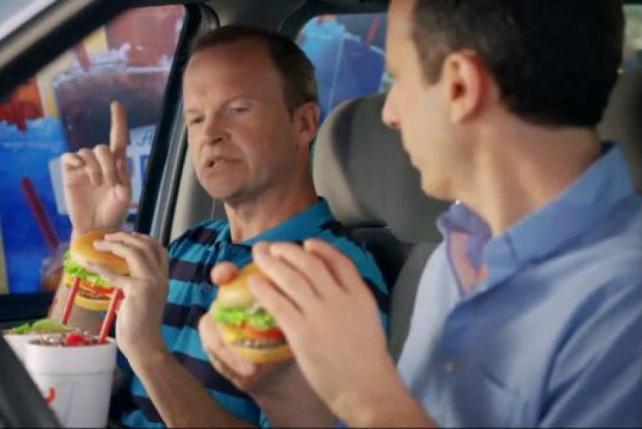 An image from Sonic ad campaign. The chain only recently broke a streak of quarterly sales declines.
Credit:

Arby's owner Inspire Brands Inc. is continuing its efforts to expand the company, announcing plans to buy Sonic Corp. in a deal worth about $2.3 billion. Sonic serves about 3 million customers every day across more than 3,600 drive-ins, according to the chain.

Inspire Brands, which renamed itself from Arby's Restaurant Group when it bought Buffalo Wild Wings and R Taco for $2.9 billion in February, says Sonic will continue to operate as an independent brand.

While Inspire Brands CEO Paul Brown referred to Sonic as "a highly differentiated brand" in a statement, calling it "an ideal fit for the Inspire family," Sonic isn't exactly entering into the deal from a position of strength.

Arby's has grown in recent years thanks in part to its "We have the meats" marketing from Fallon. But Sonic's sales in longstanding locations fell for eight consecutive quarters until the most recent, which ended Aug. 31, finally turned it around with a 2.6 percent gain.

The deal comes as restaurant chains are battling fiercely for market share. McDonald's, Burger King and others have been relying on value-priced products to lure diners. This week, Sonic is promoting a $1.99 breakfast sandwich-and-tots deal, which comes days after a $1 hot dog special.

Sonic has long advertised its drive-ins with ads from Goodby Silverstein & Partners that center on the conversations of two guys in a car, played by comics Peter Grosz and T.J. Jagodowski. Earlier this year, Jane Krakowski and Ellie Kemper were featured in some of the chain's ads.

The deal, which still needs the approval of Sonic's shareholders, is expected to close by the end of 2018. The Sonic board of directors has unanimously approved it.