ARF: Brands Should Be Spending $31 Billion More This Year Than They Are | Ad Age
Skip to main content

ARF: Brands Should Be Spending $31 Billion More This Year Than They Are

U.S. advertisers are leaving money on the table, underspending collectively by around 16% or $31 billion annually, because they fail to spread their budgets across enough media, according to an Advertising Research Foundation study released today at the group's Re!Think 2016 conference.

Advertisers are erring by shifting money among media platforms rather than spending more to spread it more widely, the group has concluded, based on what ARF CEO Gayle Fuguitt called the most extensive industry study in more than a quarter century. The "How Advertising Works Today" project, launched last year, spanned 5,000 campaigns for 1,000 brands in 41 countries and a total of $375 billion in global ad spending.

The study found brands on average can increase return on investment 19% by increasing from one media platform to two, with each additional platform adding to ROI, up to five, which improved ROI by 35% over using just one. But the ARF found 29% of campaigns relied on just one medium, and 60% relied on two or fewer.

Based on extrapolating the effects on brands for companies studied, which included Unilever, Pfizer, Kellogg Co. and Sun Products, the $196 billion the ARF estimates U.S. advertisers will spend this year should be more like $227 billion, said Jasper Snyder, the group's exec VP-research and innovation for cross-platform.

'Media crabgrass'
Adding more platforms pays off, but just adding more exposures doesn't, particularly with digital banner ads. Once a brand hits the same person with digital banner impressions 40 or more times in a month, sales actually start to decline, and marginal positive impact begins declining well before that, according to the study.

Only around a third of digital banner impressions have any impact at all, Mr. Snyder said, counting both the 57% that aren't viewed by humans and another roughly 10% rendered useless by frequency overkill. He cited the late media planner Erwin Ephron in saying: "Frequency is a kind of media crabgrass."

Putting radically different creative in different media isn't the answer either. A separate neuro-science track of How Advertising Works Today found campaigns with varied creative strategies can actually cancel each other out and become less memorable. Unified cross-media campaigns were on average 57% more effective than those that aren't.

That doesn't mean ads in different media have to have the same exact message or look. Pranav Yadav, CEO of Neuro-Insight, which tracks how people respond to ads based on brain electrical activity, said just having a common element, such as a Facebook display ad of an athlete holding a Gatorade bottle, helped make a TV ad showing the same athlete more memorable.

Even for millennials traditional media has its place, and a pretty big one, according to the ARF. The study found a budget with 78% spending on traditional media to 22% on digital worked best for audiences as a whole. For people ages 18-34, the split was only a slightly different, 71% to 29%.

ARF neuro-science research helps explain why multiple media are important. Advertising is more likely to be encoded in long-term memory if people encounter it in multiple media, said Manuel Garcia-Garcia, senior VP for research and innovation in global ad effectiveness at the ARF.

"When similar aspects are taken from one platform to another, it increases memorability on the second platform," Mr. Yadav said. He calls the process "priming," and notes that depending on the brand, radio can prime TV, digital can prime TV, or vice versa. TV and print have a strong cross-priming effect, he said, because they both tend to be viewed in a relaxed setting. Likewise mobile and digital outdoor often work together, he said, because both are viewed "on the go."

At a conference where in recent years research sometimes has been a cudgel representatives of one medium wielded against others, or at least to boost themselves above all the rest, a theme this year is how they all work together.

Facebook + TV
Even Facebook, whose executives at last year's Advertising Week were making a hard pitch for their ability to reach millennials and Hispanics more effectively than TV, turned to Mr. Yadav's Neuro-Insight for a presentation looking at how advertising on Facebook first can make TV ads more memorable and work better.

The test covered brands from six industry verticals and looked at sequencing TV and Facebook both ways. Putting Facebook first performed more than 33% better in terms of creating long-term memories in Neuro-Insights tests. Mr. Yadov believes it's the "teaser effect," because people generally scrolled through the Facebook ad quickly, but it set them up to pay attention to and store the TV ad in long-term memory when they saw it.

Similarly, the broader ARF neuro study found simply taking TV ads to mobile video doesn't work well. Mr. Garcia-Garcia showed eye-tracking heat maps that were highly focused on key brand elements for an ad on TV but were spread all over the screen for the same ad on a smartphone.

Continuing the cross-media theme, Nielsen Catalina Solutions presented research with KraftHeinz's Crystal Light and Time Inc. showing that adding print and digital to a TV campaign had a major impact on improving ROI.

The study incorporated advanced statistical techniques and machine learning to measure magazine audiences and the impact ads have on their purchases. In part by using the Catalina shopper card purchase database compared against Time Inc.'s subscriber and newsstand data, it was able to quantify the "secondary audience" of people who read magazines at doctors' offices or friends' houses but don't buy them, which turned out to be 74% of the magazines' audiences. 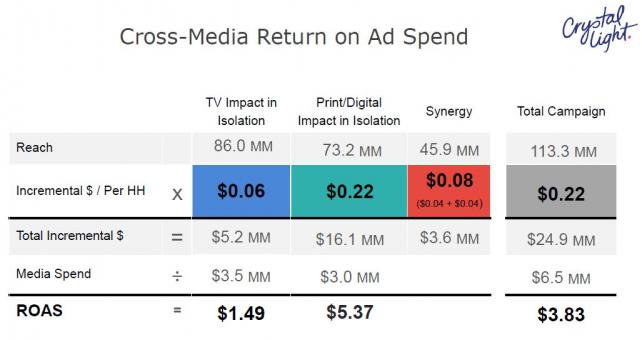