Marketer's Brief: Back to fool? This Ashley Madison ad is probably not a good idea | Ad Age
Skip to main content

Marketer's Brief: Back to fool? This Ashley Madison ad is probably not a good idea

When it comes to alcohol and sports, beer brands used to have a monopoly on sponsorships. But those days are long over as liquor continues to gain ground. Jägermeister is the latest booze brand to ink a deal. Find out more below, along with which esports property Mastercard is hooking up with and how Gillete is crowdfunding a new razor. But first, see how Ashley Madison is stooping to a new low.

Still so much to learn…

Infidelity site Ashley Madison is using back-to-school season to promote itself as a hookup destination for moms on the prowl. Because of course all mothers are sex-crazed maniacs just waiting for the school bus to leave before they begin their mid-day romps. This week, the racy brand debuted a 30-second national TV spot that depicts a woman having an affair while her kids are at school. The ad, which features a mom and the character of Rafael, who may or may not be providing "Spanish" lessons in bed, was created with 5 Stranger Films, according to a press release.

And per Ashley Madison President Ruben Buell, the campaign illustrates that mothers are "choosing to maximize their freedom—and their empty house."

"With the kids out of the house, moms finally have time to focus on themselves again," he added in the release. "It's their 'me' time." The ad, and Buell's comments, assume a lot, so we'll leave it up to readers to reach their own conclusions about how empowering this particular brand is for women.

Gillette has lowered prices to battle budget brands such as Unilever's Dollar Shave Club and Harry's in recent years, but its latest gambit goes way upscale. GilletteLabs has begun an Indiegogo project to back a new heated razor system at the "discounted" price of $124 (down from the $169 list price for early adopters).

It's not the first time P&G or other well-heeled CPG brands have tried crowdfunding. And it's not the first heated razor system to do so either. Startup SmartRazor took to Kickstarter in 2016 to back its heated razor and aims for a broad rollout early next year, says CEO Lou Tomassetti. "SmartRazors are coming, and nothing will stop us," he says. Gillette's Indiegogo funders should get their shipments in February. This could become the first new system Gillette has rolled out broadly to the general market since just after Procter & Gamble Co. bought the brand 13 years ago. That's not counting Treo, a system for caregivers to shave the people they care for, launched in 2016. Prior to that, Gillette had introduced major systems every eight to 10 years since the 1980s. 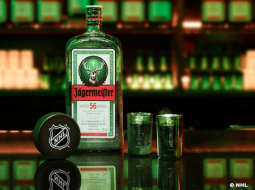 The NHL has a new official shot, and it has nothing to do with a hockey stick: The league this week inked a new sponsorship with Jägermeister. The herbal liqueur is branding itself as "The Official Shot of the NHL." Jägermeister sees an opportunity to partner with a sport played on ice because Jägermeister shots are meant to be consumed at a chilling negative 18 degrees.

Mastercard is putting its money where the players are—the growing world of esports. The brand announced this week that it is the first global sponsor of "League of Legends," the multiplayer title from Riot Games that's popular in esports. Mastercard plans to host experiences—like event activations and promotions—for its "Priceless" campaign at three annual global esport tournaments. "Esports is a phenomenon that continues to grow in popularity, with fans that can rival those at any major sporting event in their enthusiasm and energy," enthused Raja Rajamannar, chief marketing and communications officer at Mastercard, in a statement, noting the millions of fans that watch and attend the tournaments each year. (Learn more about esports in a dedicated track this November at Ad Age Next.)

Kia hooked up with Red Bull on new campaign for its 2019 Forte compact. In one ad racer and stunt driver Collete Davis launches the Forte over a custom-made Red Bull-branded Forte (not for sale). To prove it was done with no nets or wires, Kia is releasing an online video showing the ad from multiple angles. The campaign is by David & Goliath. See both versions of the ad below.

To herald its new men's collection with basketball player Kevin Love, apparel company Banana Republic has released "Who is Kevin Love," a new ad campaign themed with Love, drummer Questlove, skier Lindsey Vonn and chef Marcus Samuelsson. The Gap-owned brand worked with R/GA Portland on the digital push, which includes a host of images and videos. Love's line began selling in stores and online earlier this week, at prices from $14.40 to $548.

Would you by this?

Jim Beam is getting in on the post-Prohibition booze trend with Jim Beam Repeal Batch, an 86-proof whiskey inspired by a recipe concocted by the Beam family after Prohibition was repealed.

4.15 percent: Share of the U.S. digital ad market captured by Amazon, according to eMarketer. That equals $4.61 billion, which is up from the March projection of $2.89 billion. Google (37.14 percent) and Facebook (20.57 percent) still dominate.

Spend less time on the couch and more time behind the wheel.#MINIspoilers #BingeWatching pic.twitter.com/YKnNhJmV6o

Barbara J. Murrer, senior director of marketplace insights for Levi Strauss & Co., has been named chair of the Advertising Research Foundation board—the first female marketer to chair the board in the group's 82-year history. She succeeds Jed Meyer, director of brand measurement at Google. She's also the first ARF chair based on the West Coast. Levi Strauss is based in San Francisco, and while Google's headquarters is nearby, Meyer is based in New York.