For Asus, the Future Is in Innovation -- And Staying in 'Touch' | Ad Age
Skip to main content

For Asus, the Future Is in Innovation -- And Staying in 'Touch'

After Rising to Prominence as the Creator of the Netbook, Computer Maker Sets Sights on Starting a New Chapter With Hybrid Devices
READ THIS NEXT
A regularly updated list tracking marketers’ response to coronavirus

For Asus, the future is built on touch.

Rather than doing a traditional holiday push, Asus built online ads around spring holidays and summer graduations, and focused on the theme of touch.

Along with its own product lines, it makes the popular Google Nexus 7 tablet, which recently unveiled a second version. But while Asus' shift is not surprising considering the projected upward spike of tablet sales vs. the horizontal track predicted for traditional PCs, it is a reinvention for the Taiwanese computer maker.

In 2007, Asus first achieved mainstream recognition in the U.S. for creating the netbook category. Back then Asus' Eee PC netbook stormed the computer market, capturing the attention of consumers looking for smaller and lighter notebooks. The company sold 4 million devices in less than a year, and the netbook began to eat into laptop market share, at its zenith garnering about 20% of the PC market.

Then along came the Apple iPad. Its 2010 introduction marked the beginning of the end for netbooks, a device already on the wane, thanks to category confusion and subpar performance. When Asus finally shuttered netbook production earlier this year, it had already launched a shelf-full of ultrabooks and tablets with touch capabilities and hip-sounding brand names including VivoBook, Taichi, Transformer and Zenbook.

Kevin Huang, Asus' VP-marketing in the U.S., is leading the charge to change the perception of Asus from just another low-price alternative -- and the grandfather of the netbook -- to a desirable lifestyle brand. 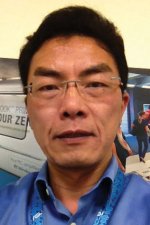 "We're telling a different story this time," said Mr. Huang, who joined the company in 2007. "This time, the key objective is to get consumers to like Asus -- to create awareness and to have them think of Asus as their No. 1 Windows 8 touchscreen choice."

The brand's portable market share, particularly in tablets, is climbing, aided by the deal with Google to build its Nexus 7 tablet, along with Asus' already solid reputation with a hardcore-gamer fan base. And not a moment too soon. The Consumer Electronics Association recently said about 80% of all computers sold by 2016 will be tablets. Currently, 40% of adults online own a tablet, according to CEA's quarterly tablet survey.

In the first quarter, Asus jumped to No. 3 in worldwide tablet shipments, moving 2.7 million units to give it a 5.5% market share, behind Samsung at 17.9% and Apple at 39.6%, according to IDC. Amazon ranked No. 4 with a 3.7% share. Also in the first quarter, Asus reported year-over-year growth had more than quadrupled; it posted the biggest increase among the top five tablet vendors. In overall portable PC sales, Asus ranks sixth in the world but aspires to be in the top three by 2014, Mr. Huang said.

Asus' marketing strategy also reflects its efforts to reinvent itself. A recent VivoBook campaign, for instance, departed from the normal back-to-school and holiday push electronics retailers are known for with online ads built around Mother's Day, Father's Day and summer graduations. The campaign was created by Whirled, Los Angeles, the Google agency responsible for the well-received Google "Zeitgeist 2012" year in review video.

The theme of the Asus work was touch, with the sentiment that a mother, father or fellow student's touch can make all the difference. Each garnered well over 1 million views on YouTube, according to Asus and Whirled. A social-media promotion asking customers to share favorite moments around moms and dads garnered more than 12,000 submissions.

'The only good play'

Whirled founder and Creative Director Scott Chan agreed that lifestyle branding is becoming common in the tech marketplace. But the style is new for Asus, and he added the advantage is in the execution: "It's something that some people do well and some people don't."

Steve Baker, an analyst with NPD, agreed that lifestyle has to be the key theme of tablet and PC touch computing, noting, "That's the only really good play."

NPD expects traditional clamshell-PC sales to trend down a few points over the coming quarters, although the demise of that market is not as rapid or dire as sometimes portrayed, Mr. Baker said. He predicts deep discounts on the 7-inch and 8-inch tablets for holiday, as well as a continued push on hybrid PC products.

He characterized Asus as doing OK, although he cautioned that "like a lot of Asian [electronics] marketers, they tend to solve problems by throwing a lot of SKUs at it."

Mr. Huang noted that Asus will continue to push forward, not just on tablet and touch, but on its full line of mobile products. A two-in-one smartphone tablet called PadFone Infinity is expected to hit the U.S. market in the first quarter of 2014. And in the second half of this year VivoBook and the Transformer Trio, a three-in-one desktop, laptop, and tablet, will receive new marketing pushes under Asus' "In Search of Incredible" tagline.

"I know that our competitors saw the strong demand of our [hybrid] devices and [rallied] ideas to come up with their own type of products," Mr. Huang said. "Innovation is the key to Asus' success, and that's the message we want to deliver to change Asus' perception as a netbook company."