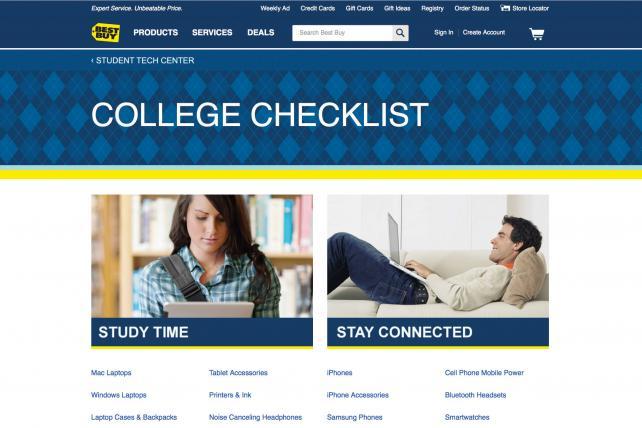 Best Buy's back-to-school ads were more targeted than in years past.
Credit:

In the never-ending quest to feed consumers exactly what they crave, Best Buy's messaging during back-to-school was so targeted that some customers may not have been alerted to promotions at all -- on purpose.

The back-to-school season marked the first time Best Buy tested the prowess of its Athena project in digital media campaigns. The database has been publicly touted by execs as key to the company's future since early last year. Now, CMO Greg Revelle says the marketing success surrounding back-to-school foreshadows the retailer's plans for the all-important holiday season.

Mr. Revelle said the company did not send, as it may have historically, a blanket back-to-school sale message promoting discounted laptops or refrigerators to the whole customer database. Instead, Athena helped the firm identify students, those who seemed like students and the parents of potential students based on prior shopping records, among other interactions with the retailer. These select customers then received back-to-school emails that had been cross-referenced with products the company had identified for promotions. As a result, it's the customers who did not fall into those specific categories, Mr. Revelle said, who may have been unaware the retailer even ran a back-to-school sale. 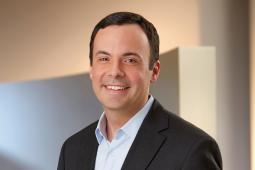 Similarly, via its Best College back-to-school campaign, Mr. Revelle said the retailer did not want to "alienate parents" by its choice of young talent, but knew it had to change tactics from years past. "Previously, the ads weren't connecting with the decision makers, which were the students. So we featured the student above all else," he said.

Knowing that messaging resonates differently with different customer segments is important, said analyst Scott Tilghman of B. Riley & Co. In the case of mobile phones: "The parents want to know what the deals are. Can my child upgrade? What's it mean to my bill? Are there any sales?" he said. By comparison, students want to know what models, colors and cases are available. With Athena, Best Buy "can hit both with what is essentially the same product, but with two different types of messages," said Mr. Tilghman.

In another instance, for Best Buy's Labor Day appliance sale, Athena helped the company create marketing messages that targeted late-stage millennials or Gen Xers, who are typically more likely to be moving at that time of year.

"Instead of running one campaign, we run campaigns in parallel," Mr. Revelle explained. He added, "We're certainly happy with the [recent marketing] results and will do a similar thing with holiday this year."

Athena, which is named after the Greek goddess of wisdom, was formed several years ago with loyalty program data. It connected the company's previously siloed departments under one umbrella to create carefully chosen messages that would hit the right inboxes or platforms at the right time, Mr. Revelle said. Athena's capabilities have slowly ramped up, having started with data from email/CRM, then incorporated a focus on marketing and promotional messaging during last year's holiday season.

"We can take our real customer base and put them into segments based on knowledge of activity with Best Buy -- shopping and purchasing behavior and service consumption behavior. We put it all together to inform segmentation. We use third-party research to [further inform] segmentation and then center marketing campaigns," Mr. Revelle said, adding that Best Buy employs data scientists who work alongside the marketing team. "In that regard, we're somewhat state-of-the-art."

The $40 billion electronics retailer, which saw a 17% jump in online comparable store sales during the second quarter, has also "sacrificed," Mr. Revelle said, by not spending money on TV or print ads it otherwise might have run during back-to-school. "We invested so many dollars into Athena," Mr. Revelle said. "But we're seeing good results."

Best Buy spent more than $59 million on U.S. measured-media during the first six months of 2015, down from nearly $116 million during the same period in 2014, according to Kantar Media. Overall, the retailer spent $635.5 million on domestic advertising last year, according to the Ad Age Datacenter.

The knowledge Athena provides has also created a need for different messages -- and a lot more of them than in years past. This shift helped spur the retailer's move away from an agency-of-record model. Last April, Best Buy parted ways with Crispin Porter & Bogusky and moved to a project-by-project model. Mr. Revelle said Best Buy has "more demand for creative than supply" at this point.

"We're redeploying a lot of the resources we might have put against a major campaign via an AOR to much more tailored creative that can be reused across social networks and email banners," among other platforms, in order to leverage the message over as many channels as possible, said Mr. Revelle. The depth of its database allows the retailer to be nimble and test what types of messages customers connect with, which, he said, produces a wider variety of creative overall.

Best Buy is also using Athena to improve its new wedding registry program. After connecting with third-party data vendors to capture customers that are likely to be getting married soon, Athena learns what assortments are interesting to people in this category, then determines how to time promotions for the right products. It also gathers data on whether or not people who are already registered want to know when an item has been purchased for them, and what messaging makes people engage more with the registry.

Kate McShane of Citibank Global Markets is impressed with Athena's positive impact on marketing efficiency and is not surprised by its payoff, which has been visible for other retailers with similar initiatives. "Like anyone who's making an investment of this kind for technology, it's one of those things that just gets better over time," said Ms. McShane.