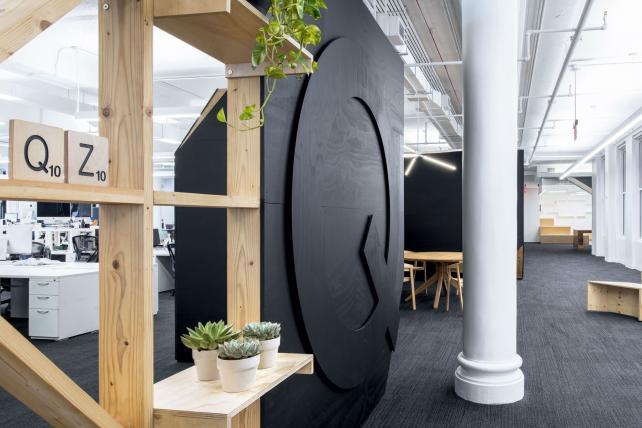 Atlantic Media announced on Monday that it will sell its digital business news platform, Quartz to little-known Japanese media company Uzabase. The company will pay, it says, will be between $75 million and $110 million, depending on the platform's financial performance this year. The acquisition is expected to close within the next 30 days.

"The sale doesn't come as a total shock, but the timing is surprising," says Emily Lenzner, senior vice president of global communications for Atlantic Media.

Lenzner says Atlantic Media Chairman and owner David Bradley was deliberate in finding a company that matched Quartz's values and would help it grow. The entrance of Uzabase was more or less accidental, she says; after the Japanese company was in talks with Quartz's editors about partnerships between the brands, a discussion about a potential acquisition evolved naturally.

Tokyo-based Uzabase was founded by two investment bankers 10 years ago and offers two products, NewsPicks and SPEEDA. NewsPicks is a subscription-based business news platform, while SPEEDA is a financial information and corporate intelligence platform.

Quartz will be picking up operation of the English version of NewsPicks, with founding editor-in-chief Kevin J. Delaney and publisher Jay Lauf becoming co-CEOs of Quartz. They will report to Yusuke Umeda, one of Uzabase's founders.

According to a statement from Atlantic Media, NewsPicks has 3.3 million registered users in Japan alone, with 64,000 of them paying subscribers at $15 per month. Quartz, with 20 million consumers across its website, newsletters, videos and more, currently relies mainly on branded content for revenue. Now, it is looking to co-opt NewsPicks' subscription strategy along with increasing paid content.

Quartz was founded in 2012 as a mobile-first digital media business. The company says it does not anticipate layoffs for any of its 215-plus staff members, including 100 journalists, in offices across the world.

Bradley said in a memo to employees Monday morning that he has had an eye on divesting from the company leading up to his 70th birthday. He previously sold much of his stake in The Atlantic magazine to Emerson Collective in July of 2017. Still, neither he nor Atlantic Media expected the Quartz sale to come so soon, he said.

"We're very happy and optimistic about the acquisition," says Michael Finnegan, president of Atlantic Media. While he expects Quartz to stay largely the same, "we wouldn't enter into this if we didn't think there would be positive changes."

Those changes are expected to include more products, more employees, and deeper reach into global markets.