Mastercard, USAA Discuss Impact of App on Security, Branding and Technology
READ THIS NEXT
The Week Ahead: ANA returns to in-person events and ‘The Dating Game’ gets a reboot 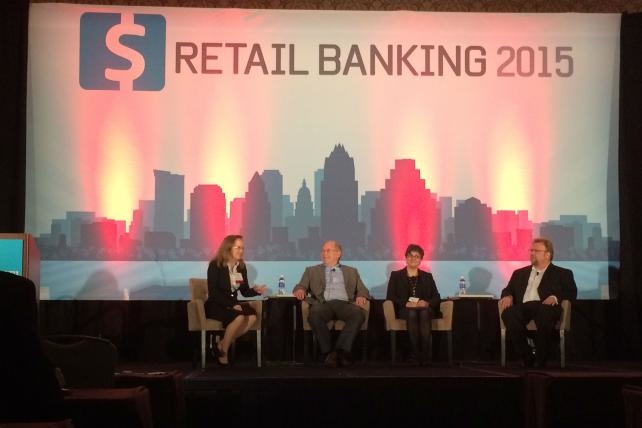 Payment security is a banking industry-wide problem and Apple needs to work with banks to solve it, said a panel at American Banker's Retail Banking conference in Austin, Texas.

"Hey, Apple you're part of the industry now," said Neff Hudson, assistant VP-emerging channels at USAA, which partners with Apple Pay. "Welcome to the party."

Security was a hot topic in light of last week's fraud attempts on Apple Pay. The fradulent transactions used stolen credit card information from retailer data breaches. Apple's platform was previously hailed as one of the most secure mobile payment options because of its use of tokenization -- an encryption system.

Mr. Hudson of USAA said he was not surprised to see fraud in the early stages of Apple Pay, considering that many of the banks that use the service were rushed to market. USAA had about 60 days to get its app ready, he said. But the nature of the attacks, in which Apple Pay's encryption was not breached, leaves him confident that tokenization works.

"Long term this is going to be a very secure technology," said Mr. Hudson. "All static data is compromised. Let that sink in a bit and realize that's why we have to get to tokenization."

Mastercard and other banks are also trying to build up their own security with layered approaches that go beyond passwords to include a combination of biometrics and other data points.

"Every part in the picture needs to continue to evolve what they're doing," said Melanie Gluck, VP-mobile and e-commerce specialist at Mastercard. "It's an opportunity for all of us to recognize that Apple Pay hooks into our system and our system still need to be best in class."

Banks are also focused on maintaining a strong brand while partnering with technology giants like Apple, Google and Samsung, all of which have mobile payment platforms.

"Today, consumers have more trust for their issuer than they do for these other parties. ... What does that look like five years from now?" said Ms. Gluck. "There's an important opportunity today to look at: What is your brand approach or your presence going to be in this space?"

As for the Apple Watch, which was unveiled yesterday, panelists were skeptical about whether this would have a real and immediate impact on mobile payments.

"It's yet to be seen how much wearables really matter," said Ms. Gluck. "It's an important entrée into wearables, but I think we're far from ready for wearables."