Only the four presenting sponsors—including State Farm, Reese’s and Facebook—will get ad time in the 10-part series 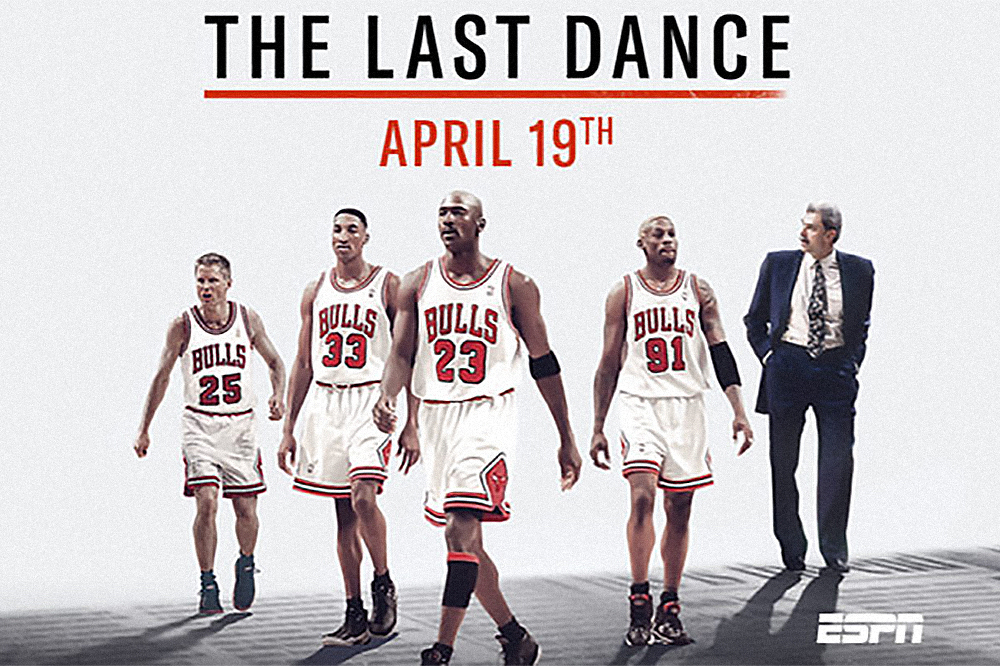 Sunday’s debut of ESPN’s highly anticipated Michael Jordan documentary series provides some new sports content at a time when it is in short supply. But only four brands will advertise during the 10-part series—because ESPN is sticking with its original plan of airing the event with limited commercial time.

The ad time goes to presenting sponsors State Farm, Hershey-owned Reese’s, Facebook and an unnamed fourth sponsor; ESPN representatives said the brand is in the pharmaceutical category but did not share details.

The documentary, called “The Last Dance,” promises to deliver never-before-seen footage from the Chicago Bulls 1997-98 championship season. The series will air on ESPN on Sundays over five weeks, from April 19 through May 17. Netflix will air it outside the U.S. It was originally slated to run in June, but ESPN moved it to April in an attempt to fill the sports hole created by the coronavirus pandemic, which led to the cancellation of March Madness and has put National Basketball Association and Major League Baseball games on indefinite hold.

The void has forced brands to reassess and reallocate their media budgets, including those in categories such as beer and automotive that normally spend big on live sports. The shutdown has impacted an estimated 120,000 active sports and entertainment sponsorship agreements worth $10 billion, according to sponsorship consultancy IEG.

ESPN—which would normally be televising NBA and MLB games right now—has suffered. Ratings for the Walt Disney Co.-owned network are down 57 percent since March 13 and fell 70 percent in the first week of April, Bloomberg reported earlier this week, prompting the network to seek pay cuts from its 100 highest-paid employees.

Against that bleak financial backdrop, ESPN executives resisted the temptation to open up more ad inventory for “The Last Dance,” despite likely strong demand from sports-hungry advertisers.

“If you wanted to increase the commercial format, then you had to edit the content, and it’s such a premier piece of content we weren't going to do that,” says Sean Hanrahan, senior VP of sports brand solutions for Disney Advertising Sales. Also, he suggests the deals with the presenting sponsors were built on scarcity. “One of the values of the sponsors was having limited sponsors and limited commercial interruption,” he says. He declined to disclose financial terms of the deals.

The deals include regular commercials in addition to in-show integrations. For instance, Facebook will brand content called “Trivia” that reveals “surprising and impressive stats on the Bulls dynasty and the NBA in the 1990s,” according to an ESPN press release. State Farm will sponsor “The Vault,” which includes ESPN archival content, and Reese’s will back an in-show feature called “Remember When,” which will recall stories about the Bulls.

State Farm is also sponsoring a show that will air after each episode and stream on various social digital channels, including Facebook and the ESPN app, featuring ESPN personalities Jalen Rose and David Jacoby. Facebook’s involvement also includes a separate pre- and post-episode show hosted by ESPN’s Sarah Spain that will air on Facebook Live.

State Farm’s involvement comes as it deals with being shut out of other sports media opportunities, including NBA games in which it is normally a heavy advertiser. A spokeswoman for the insurer in a statement said the “Last Dance” sponsorship “had been planned all along.” But she added that “we have made adjustments to our inventory due to major sports and events cancellations and closures, and the added media support we are now giving to 'The Last Dance’ is an example of that.”

Pre-pandemic, State Farm’s plans around the documentary included live events such as a red carpet activation, which is of course not possible now, according to a spokeswoman for Omnicom Media Group's Optimum Sports, a sports marketing agency that negotiated the insurer’s deal with ESPN. So State Farm reallocated that investment into the digital activations, she said.

Hershey’s involvement comes as the marketer deals with the postponement of the Summer Olympics. The candy giant sponsors Team USA. It also lost out on ad opportunities in March Madness; Hershey is an NCAA sponsor. A spokeswoman said the company had always planned to sponsor “The Last Dance.”

“While the traditional world of sports has been canceled and postponed as we know it, we are thrilled to be a part of one of the most-sought after sporting stories in our history,” she said in a statement. “This documentary will provide a much-needed sports outlet for the millions of fans missing live sports.”