Summer interns at We Are Unlimited helped come up with the idea
READ THIS NEXT
GM's ad blitz for new Hummer EV includes World Series, Twitch and NBC's 'The Voice' 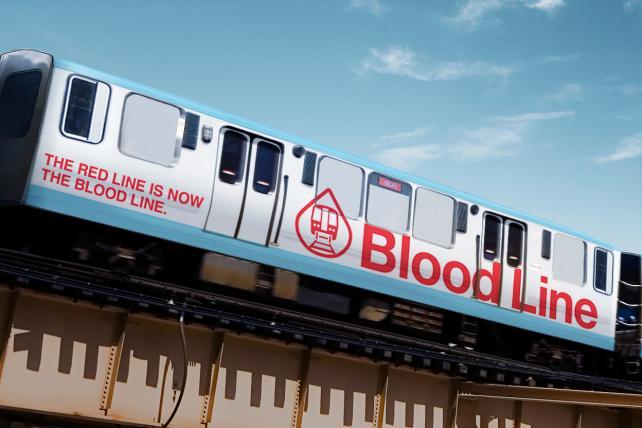 Credit: We Are Unlimited

A blood bank with low supplies in Chicago could see an uptick in donations thanks to "Blood Line" ads on the city's Red Line trains, the first pro-bono work from We Are Unlimited.

The local, month-long project for Vitalant, which describes itself as a national "transfusion medicine organization," consists of exterior ad wraps and a full interior presence on four train carriages. Trains began running the creative Monday, which features the words, "The red line is now the blood line."

The idea to do the pro-bono creative came from inside the agency when, this past summer, a group of interns and creative directors at the Omnicom Group shop brainstormed local issues that could be helped by a creative execution, says We Are Unlimited CEO Mark Mulhern. That was when they landed on blood donations.

"As Chicagoans, we all need to focus on this shortage of blood," says Mulhern, who notes the city has about one to one-and-a-half days of blood on hand, about half of the usual supply.

Once the work began to gel, We Are Unlimited reached out to Intersection, the media agency that handles placements on the city's trains and at transit stops. Intersection, it turned out, had already been in contact with Vitalant, and plans moved forward from there. January is promoted by many organizations as national blood donor month.

The "Blood Line" slogan, though, might ring a little too true, as Chicago's Red Line trains and stations have been the settings for some violent crimes. Last year's incidents included: a man shot on a Red Line train after an argument at a station turnstile; a woman being stabbed at a Red Line stop; and a man shot after a fight on the Red Line, according to local media reports.

But when it comes to reaching a large number of people, the ad placement makes a lot of sense. The busy Red Line acts as a transit artery for the city, running 24 hours a day and carrying passengers more than 20 miles.

Along with the wrapped trains, the campaign includes in-station posters, digital platform media and digital street-level media. Plans include seeking blood donations along the route on designated dates, through Vitalant's mobile setup or at locations near transit stops, beginning at the Harrison stop on Jan. 17.

We Are Unlimited was formed as a dedicated shop for McDonald's work. Its plan has been to eventually seek outside work, which it's now doing. Omnicom sibling media agency OMD Chicago is also involved in the project.