Booze Brands Rush to Snapchat While Contending With Age Risks

Teen-Friendly App is Growing Up, But Beer and Liquor Marketers Must Watch Their Step
READ THIS NEXT
The D’Amelio sisters hook up with Hollister and IHOP responds to Adam Sandler: Trending
Malibu rum's sponsored Snapchat lens
Credit: Pernod Ricard

Here is the surest sign yet that Snapchat is growing up: Alcohol brands are starting to advertise on the mobile app in significant numbers after overcoming fears of marketing on the teen-friendly platform.

Anheuser-Busch InBev broke the seal in May 2015 when it ran ads in Snapchat's "Stories" section that were tied to a Bud Light-branded event. And the pace of alcohol advertising has accelerated in recent months as marketers gain more confidence in Snapchat's ability to keep content away from users who are under age 21.

MillerCoors, Beam Suntory, Diageo and Bacardi Limited are among the companies marketing on the app. Constellation Brands will run its first Snapchat campaigns this fall with ads for Modelo Especial and Svedka vodka, according to a spokeswoman. Pernod Ricard has been among the most aggressive players. The marketer's Jameson brand ran the alcohol category's first sponsored national geo filter for St. Patrick's Day. And Pernod's Malibu brand ran a sponsored lens during Memorial Day, kicking off a summer-long Snapchat campaign.

But Snapchat remains potentially risky terrain for beer and liquor brands because it is so closely identified with teenage users.

Brown-Forman, whose brands include Jack Daniel's, has yet to advertise on the app because of concerns that a large percentage of Snapchat users are under 21. "Until the demographics get to a higher percentage [of 21-plus] and the targeting capabilities from Snapchat get better, it's not something we can open up to Brown-Forman brands," Jason Loehr, the company's VP-global media and insights, said in a statement.

Heineken USA has also stayed on the sidelines, but the marketer is watching developments closely. "While we have not yet bought advertising on Snapchat, we have been monitoring their progress and are actively exploring how they could fit into our future communication plans," Frank Amorese, Heineken USA's media director, said in a statement.

The beer and liquor industries have regulations mandating that ad placements only be made on media properties in which 71.6% of the audience is above legal drinking age. Snapchat has not publicly disclosed the percentage of users under 21, although it recently revealed that more than half of new Snapchatters in the U.S. are 25 or older. Mr. Loehr stated that the "age demographics for Snapchat are still well below the 71.6% mark that is our first filter at Brown-Forman when reviewing a platform."

But alcohol brands brands that are advertising on Snapchat say they are only serving ads to users who are 21 and older, based on birthdates entered upon registration. This complies with regulations overseen by the Beer Institute trade group and Distilled Spirits Council of the U.S., which is known as DISCUS. Of course, nothing stops a user from lying about their birthdate. But the alcohol industry has long-relied on such imperfect age-gating tools.

Booze brands stayed off Twitter until 2012, when the company began implementing age-gating tools. Today, Twitter allows brands to ask for a person's age before the brand can be followed. The age data is collected once, so other alcohol brands that want to use age-screening can use it, according to Twitter.

Snapchat -- which launched in 2011 -- began collecting birth dates in June of 2013, making it a requirement for new user registration. However, because of how the app works, some alcohol-branded user-generated content is able to be sent to users who have not been age-gated. This can occur with sponsored lenses -- in which users overlay images over their selfies -- and sponsored geofilters, which allow users to add branded art to their snaps after they enter a certain location targeted by the brand, such as a sports stadium. While alcohol brands can limit availability of lenses and filters to age-gated users, there is nothing stopping these users from sending the images to underage friends.

This limitation is why Beam Suntory -- whose brands include Jim Beam and Pinnacle Vodka -- does not use branded filters or lenses, according to Andrea Javor, the marketer's senior director of global digital and media. "That content can easily be shared with friends of [adults 21-plus] and we cannot verify those users are of [legal drinking age]," she said in a statement. So the company has limited its Snapchat advertising to Snap Ads, which are the 10-second ads that appear within Snapchat Stories. 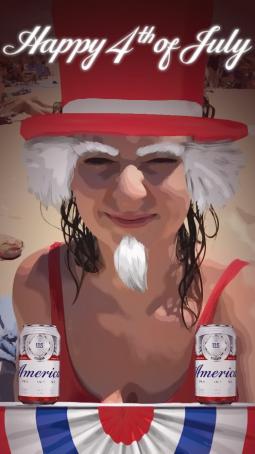 Some alcohol marketers are using lenses and filters fairly aggressively. A-B InBev on the Fourth of July created the first-ever Snapchat lens for a beer brand. It imposed a Budweiser branded Uncle Sam image over selfies. In May, the brewer ran a national Snapchat filter for Lime-A-Rita for Cinco de Mayo, which it said generated 64.8 million views.

Pernod Ricard's St. Patrick's Day national geofilter campaign for Jameson carried the message "Cheers to St. Patrick's Day" along with a picture of a bottle of Jameson beside a shot glass. The filter was targeted to neighborhood bar-goers. Malibu rum's Memorial Day lens was part of the brand's plan to have "significant presence on Snapchat over summer," said Andre Marciano, director-consumer planning for Pernod Ricard USA , whose digital agency is 360i.

"With one-to-one consumer communication, we need to do everything we can to hold ourselves accountable because we are a self-regulated industry," said Jeffrey Moran, Pernod Ricard USA's VP-influencer engagement and marketing activation services. "We need to do the best we can to make sure we are only talking to legal age drinkers ... If someone wants to send that on to whatever their group of friends is, they may be able to do that." But "obviously we prefer that not to happen because the goal is we only want to be talking to 21-plus, because those are the only people who can buy our brand," he added.

Under DISCUS' media buying guidelines, "digital marketing communications that are intended to be forwarded by users should include instructions to individuals downloading the content that they should not forward these materials to individuals below the legal purchase age." Pernod's Memorial Day lens for Malibu carried the message "For 21 Plus," for instance. The Beer Institute has a similar rule.

"At the end of the day, we trust that these adult consumers are going to behave like responsible adults and do the right thing," said Lisa Hawkins, DISCUS' VP-Public Affairs. She added: "Snapchat is a responsible and appropriate channel for spirits companies to market their product to adults."

But Snapchat's rising popularity with alcohol brands has opened the door to fresh attacks from longtime industry critics.

"Snapchat is incredibly youth oriented," said Bruce Lee Livingston, CEO of Alcohol Justice, which has long pushed for stricter alcohol ad policies and has called for the end of self regulation. "The age-gating protections on Snapchat as on other social media are a joke, as are industry self-regulation through DISCUS and the Beer Institute. So there are no effective policies to protect underage youth from paid advertising and the monitoring and selling of their consumption practices."

While Snapchat remains popular with teens, there are signs that its user base is maturing.

As of April, 14% of smartphone users ages 35 and older were using the app, compared with 2% in April of 2013, according to Comscore. Penetration among users ages 25-to-34 grew to 38% from 5%. Comscore only tracks mobile data for people ages 18 and older. So it cannot provide a complete view of Snapchat usage rate for people under the legal drinking age of 21. The app's total audience is at 150 million daily active users, according to Bloomberg. 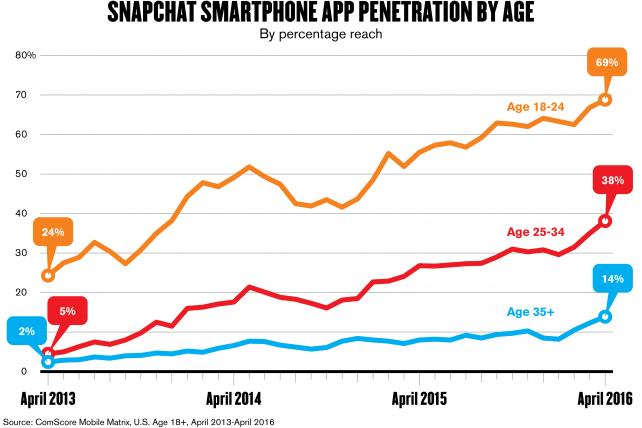 For alcohol brands, Snapchat offers an opportunity to do in-the-moment marketing, reaching consumers at bars, music festivals and other drinking venues. "With Snapchat there is an opportunity to put your brand in front of people … having it be part of their celebratory occasion," Mr. Marciano said. Users play with Snapchat lenses for 20 seconds on average, according to Snapchat. 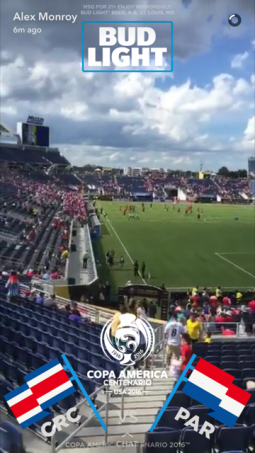 A-B InBev found similar success with a Snapchat campaign for its Shock Top beer brand earlier this year that was coordinated with a larger Super Bowl effort. The brand partnered with Snapchat in an early test of its long-form video ad format that expands when users swipe up from a regular snap ad. Shock Top's long-form video drove a 40% lift in purchase intent, according to Snapchat and Millward Brown.

The brewer has also put an emphasis on local Snapchat activations by tying creative to a specific event, Azania Andrews, A-B InBev's U.S. senior director of digital connections, said in a statement. For the Copa America Centenario soccer tournament, the brewer created branded filters for Bud and Bud Light that were targeted at people in particular stadiums watching matches.

Stated Ms. Andrews: "While we do reach a smaller percentage of Snapchat's total user population because of our commitment to reaching legal drinking age consumers only, we've seen strong results in terms of brand impact and consumer engagement and we're excited for our brands to grow with the platform."