Deadpool is taking over 7-Eleven, Estee Lauder is apologizing for its ads and Wells Fargo is looking to rebuild consumer trust (again). Oh, and there's a serious marketing labor shortage. Find out more on all that below. But first, we begin with what's being billed as the "first systematic study of gender and race representations for leading U.S. product mascots."

Safe to say that the Frito Bandito was not a proud moment for Frito Lay. The gun-wielding mascot was introduced in 1967, reinforcing negative stereotypes about Hispanic people, not to mention promoting a little gun violence: The mascot stole chips at gunpoint. Yikes! 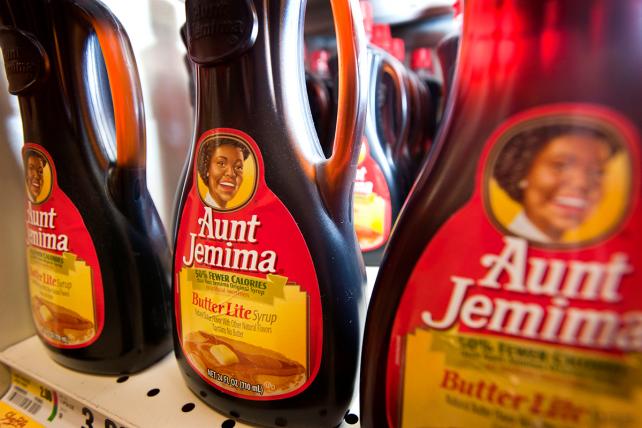 We bring this up now because it's cited in a new report examining how brand mascots matter when it comes to reinforcing gender and racial stereotypes. While there might not be characters around as overtly racist as the Bandito (Frito Lay pulled him a long time ago), the situation is still pretty grim, according to the study by the The Geena Davis Institute on Gender in Media. Male mascots outnumber female mascots two-to-one. And when female mascots are used, they often fuel gender stereotypes. For instance, females are less likely to be shown as possessing authority, and one-in-10 female mascots are shown as wearing sexually revealing clothing, according to the report. It's not much better when it comes to race: Mascots of color are significantly more likely to be shown as cooking or preparing food than white mascots, states the report, which cites a recent Kellogg's Corn Pops cereal box design that drew heavy criticism for its depiction of a dark-colored character as a manual laborer.

The study doesn't cite many other examples, but they aren't too hard to find. Aunt Jemima is still around despite years of criticism, for instance. And racist mascots are still found in pro sports leagues, like the Washington Redskins. The study was done in partnership with the Jel Sert Co., whose Otter Pops brand recently added three new female otter mascots to achieve gender parity.

Below, the aforementioned Frito Bandito character.

Now, for some better news on the gender diversity front. In a new report, the Association of National Advertisers reveals that women far outnumber men in the marketing departments of ANA members. Women account for 67 percent of rank-and-file positions, according to the report. The bad news: Women are underrepresented at the executive level, holding 45 percent of CMO, or CMO-equivalent, jobs. Also, marketing departments still lack racial diversity. Seventy-four percent of rank-and-file employees are white and white people account for 87 percent of CMO jobs, according to the report.

Marketers: You're in demand

The upside for marketers looking to boost their diversity is that there is plenty of opportunity to do so, because the industry is poised for a hiring spree. LinkedIn's new May Workforce Report cites a nationwide shortage of 230,000 marketing professionals. The greatest shortages are in some of the expected places and biggest cities: New York, San Francisco, Boston, Seattle and Washington. But smaller cities like Nashville, Charlotte and Tuscon are also hurting for marketers right now. Some places do have surpluses of marketers though, according to LinkedIn, including most of southeast Florida, St. Louis, Las Vegas and Orange County, California.

Trust is hard to come by

Two years after its fake accounts scandal, Wells Fargo is back with a new marketing campaign, "Re-Established," to help restore faith with consumers. The push will "emphasize the company's commitment to re-establish trust with stakeholders," read a press release announcing the nationwide effort. Yet the new campaign, also created with BBDO, conjures a little déjà-vu. It comes roughly a year after last year's "Building Better Every Day," meant to build "on the company's commitment to rebuilding trust," according to a 2017 release. When Ad Age asked a spokeswoman about the striking similarities in objectives, she said the campaigns are "completely different" and speaks to the changes Wells Fargo has made in the last 20 months to transform its business. Let's hope there isn't a round three.

Estee Lauder CEO Fabrizio Freda gave a deep if non-specific apology for false ad claims on the company's earnings conference call last week. "We recently learned that some testing related to certain product's advertising claims had been intentionally altered for some time by a small group of employees," Freda said, something the company learned through its "internal escalation process." The practice "clearly does not meet our standards, and we immediately launched a comprehensive review of our product advertising claims support, which is ongoing."

The claims in question don't involve safety, Freda said, "and consumers can continue to use the products they know and love with confidence." As the review continues, "many of our claims will not change, but others will. Some changes may be minor and others could be more significant." Product launches won't be affected, according to Freda, because the company has resolved the issue for the future. Estee Lauder Cos. Is "investing in strengthening our talent, resources and independent validation to ensure that this does not happen again.," he said.

Craft marketplace Etsy reported better-than-expected first-quarter earnings this week, thanks to a healthy marketing spend of $26 million in the quarter—a 12 percent rise over the year-earlier period. Last month, the Brooklyn-based company rolled out "Targeted Offers," a new paid marketing tool where sellers can directly target their buyers. "Early results are encouraging," said CEO Josh Silverman on a conference call. For the quarter, Etsy saw a 25 percent rise in revenue over the year-earlier period to $120.9 million.

A major "Deadpool 2" promotional push by 7-Eleven now has a signature candy. The convenience store chain's #DPx7E push began in full force on May 2 with a Deadpool 2 Slurpee cup and other in-character branding.

Grab a #Deadpool chimichanga, so you can changa & chill. #DPx7E pic.twitter.com/nO7plBNIU0

There's even a "meet Deadpool" AR element on the chain's app. Now, Trolli is selling Sour Tiny Brite Hands candy, which it says was inspired by the (spoiler alert!) tiny hand the Ryan Reynolds character regenerated in the first film. 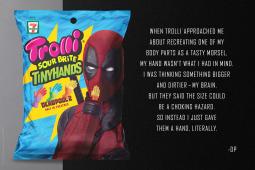 The campaign for the candy, which is only sold at 7-Eleven, included a Times Square event on May 7 at which people were asked to show their package of the candy and poses were displayed on digital billboards for the #ShowUsYourPackage sweepstakes. "I like to think of the creative work as a 'tiny' middle finger to traditional, predictable advertising," Periscope Creative Director Dustin Joyce said in a statement. There are even Tiny Hands boxer briefs being sent to influencers. 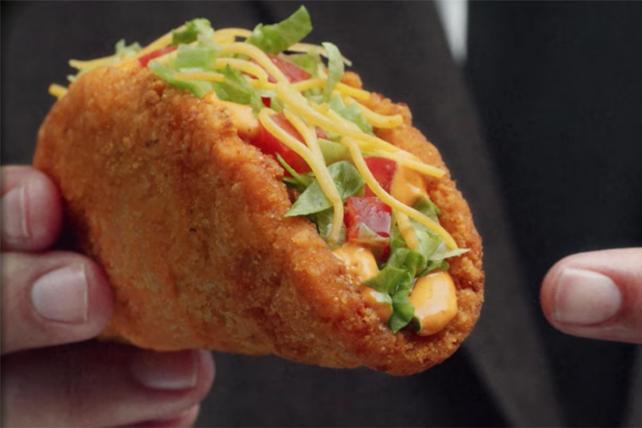 Taco Bell is coming out of its shell again: Its Naked Chicken Chalupa returns May 10 for a limited time in the original version with avocado ranch sauce and a new "wild" version with a Mexican-inspired chili sauce.

The (unlucky) Number of the Week

13: The number of consecutive years for which soda sales have declined after volume fell by 1.3 percent in 2017, according to a new report from Beverage Digest.

Ok, but don't get handsy and we have to be home by 10. https://t.co/tQunlsqecG

The first female CMO at Nascar now has an additional title. Jill Gregory was recently promoted to exec VP-chief marketing officer; she was named CMO in 2016. Pete Jung was promoted to VP, brand marketing, responsible for all brand and consumer marketing efforts.