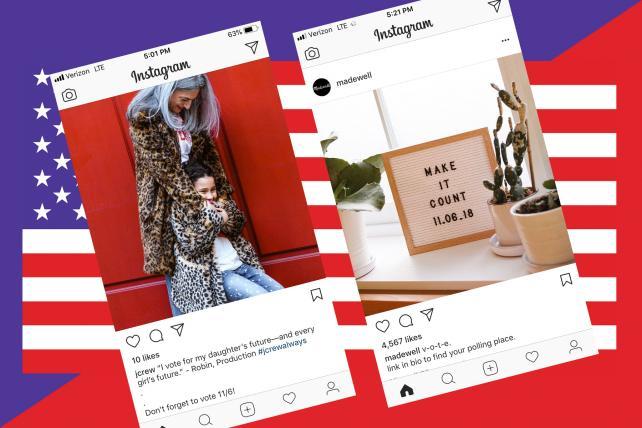 Tuesday is Election Day, and brands are doing their best to make sure consumers are aware of it. While some marketers are doubling down on social media though the use of Twitter and Instagram, others, like Levi's, are creating entire video campaigns urging citizens to vote in the midterms.

Patagonia, the sportswear retailer, is closing its 32 locations on Election Day. The brand is not one to shy away from social causes—indeed, Patagonia sued the Trump Administration last year over federal land protections. The brand recently joined with PayPal, Levi Strauss & Co. and Walmart to increase voter turnout in a "Time to vote" coalition. Patagonia also tweeted its support of Montana senator Jon Tester.


Levi's issued a video focused on voting in September; the second iteration of the film, developed with creative agency FCB, will be released Tuesday.

ModCloth, the indie apparel label bought by Walmart last year, will shut down its website and its three stores; the brand is offering employees paid time-off and reimbursing employee transportation costs for those who hit the polls. The brand's website will read "Step Up. Speak Out. Make a Difference," on Tuesday. Shoppers who display "I voted" stickers to Modcloth store associates on Wednesday will receive pins and tote bags.

Similarly, J. Crew recently began a series of posts on Instagram that include interviews with brand employees. "I vote for my daughter's future—and every girl's future," said Robin, a J. Crew staffer in the production department, in a recent post for the clothier. J. Crew's smaller sibling label Madewell, which has seen double-digit sales increases in recent years as its popularity grows with millennials, has also been posting messages of voter encouragement on Instagram. "Make it count 11.06.18" an October post read.

Even Facebook urged users earlier this week to "Set a Reminder to Vote This Election" on the app.

On Monday, brands including restaurant chain Potbelly took to Twitter to finalize their pleas.

Tomorrow, @PeiWei is giving out complimentary fortune cookies to everyone who votes!!

Voting formation 🇺🇸 Only one more day to get in to formation, and go vote! #doyouwaterloo #govote pic.twitter.com/n3si3omeyP


Celebrities are also intensifying their messaging.

Tuesday is my 72nd birthday. I want one great big gift that can only come from you.

Vote. Like our lives depend on it. Because they do.

Iowans, for personal reasons I hope you'll vote Steve King out. I'm tired of being confused with this racist dumbbell.