When Anheuser-Busch InBev launched its margarita-inspired Bud Light Lime Lime-A-Rita flavored malt beverage in April 2012, it was supposed to be a summertime limited edition ending by Labor Day. But the line extension survived and has grown to the point where the brewer has made it a major priority with new flavors and an accelerating marketing budget.

Measured media spending on the Ritas franchise jumped from $2.7 million in 2012 to $11.8 million last year, according to Kantar Media. This year, spending will grow "significantly," said Tyler Simpson, director of marketing for Bud Light extensions. He declined to reveal the budget but said, "we are stepping up our investment in the Ritas," which he called a "big bet for Anheuser-Busch."

Much of the new spending is supporting a campaign that launched this week called "Fiesta Forever." The campaign is by BBDO, which handles Bud Light out of its New York and Chicago offices.

A TV ad (above), features a man handing out Ritas at offices, pools and in living rooms, while speaking and singing the 1980s pop hit "All Night Long" by Lionel Richie. (Mr. Richie's aging song library is apparently generating new interest from marketers: Taco Bell used a cover of his "Hello" song in an ad that debuted last year.)

At the same time, Bud Light keeps churning out new flavors of the Ritas, which are designed to be poured over ice and steal market share from liquor brands. 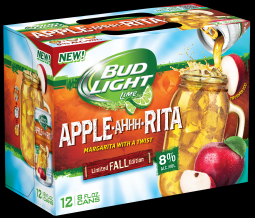 Also, Cran-Brr-Rita, which was sold last winner, is returning in November. The flavor's popularity last year led to stock shortages and prompted the brewer to extend its run past the holiday season and into January, A-B InBev said last year.

Bud Light might not stop there: Trademark applications have been filed for more than 10 additional flavors, including Melon-Rita, Peach-A-Rita, Ki-Wi-Rita and Pom-A-Rita, according to the U.S. Patent and Trademark Office. Mr. Simpson declined to comment on the potential new offerings.

If sales are an indication, the brand might need to keep innovating to maintain its market share momentum. The Rita franchise grew dollar sales by 55% to $498 million in the 52 weeks ending June 15, and now controls 28% dollar share of the flavored malt beverage segment, according to IRI, which refers to the category as "progressive adult beverages."

But the newer Ritas are outperforming the older varieties. Sales of Lime-A-Rita -- the original Rita -- fell by 28% in the time period, while Straw-Ber-Rita, which debuted in March of last year, grew by 128%, according to IRI. Meanwhile, Mang-O-Rita and Raz-Ber-Rita, which launched in March this year, have already reached $47 million and $39 million in sales respectively, according to IRI, whose figures exclude bar sales.

The Ritas are "still up significantly as a franchise, but they are doing it with the new flavors and some of the older flavors are really getting whacked," said Eric Shepard, executive editor of Beer Marketer's Insights. Still, he said that trend is consistent with the nature of the flavored malt beverages category, which he said is characterized by "brand churn and flavors."

Mr. Simpson said: "We believe in each of our flavors, and we think there's a key role for each one of them."