Brand Perception Scores Drop in Wake of Controversial Slogan
READ THIS NEXT
How research drove the bold rebranding of an iconic company
Credit: Reddit

Bud Light's label gaffe has damaged the brand's image just as it heads into the critical summer beer-selling season and given critics a new reason to attack A-B InBev.

The brew's "buzz" score fell from 6 on Monday to zero as of Thursday morning, according to the YouGov BrandIndex, which measures daily brand consumer perception. The average score for domestic beers is currently 4, putting Bud Light below its peers. Among women, Bud Light fell from a 5 to -3.

Negative comments began flooding social media on Tuesday, following extensive media coverage of a marketing message scrolled on some bottles that some critics say can be interpreted as contributing to a rape culture. Anheuser-Busch InBev issued an apology statement Tuesday afternoon and has vowed to stop producing bottles carrying the slogan, which reads that Bud Light is "the perfect beer for removing 'no' from your vocabulary for the night."

But damage was done, at least in the short term. "The drop that we are seeing is statistically significant. It is meaningful," said Ted Marzilli, CEO of YouGov BrandIndex. "If literally today the story went away, I would expect Bud Light to bounce back within a week. But there is no guarantee that it will blow over starting tomorrow."

"The media coverage and social conversations about the label are understandably negative, and we are listening," Alex Lambrecht, VP of Bud Light, said in a statement to Ad Age on Thursday. "As of today, our research shows that consumers understand mistakes happen, and remain loyal to the brand. We don't take that for granted, and we also understand that there are some consumers who want to see us do better. And we will. We're looking at our creative again to be sure of it."

Critics have used the issue to attack A-B InBev on other matters.

On Thursday a group called Public Employees for Environmental Responsibility cited the Bud Light controversy while criticizing a new partnership between the brewer and the National Park Foundation. 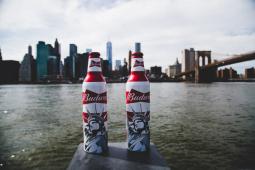 The pact includes a $2.5 million donation to the foundation as well as limited-edition packaging for Budweiser that includes an image of the Statue of Liberty. The deal also includes a concert series. The arrangement required the National Parks Service to waive a policy that prohibits marketing campaigns that associate the parks with alcohol products, according to PEER, which obtained documents from the service requesting the waiver.

The group cited the Bud Light label controversy as one of a "number of knotty questions" that the parks service "has not publicly addressed."

"If the Park Service thinks its path to 'relevancy' runs though alcohol promotions, then America's best idea has truly lost its way," PEER Executive Director Jeff Ruch stated in a press release.

The waiver does not set a precedent. A parks service spokeswoman said the agency in 2014 entered into a partnership to allow for the sale of a "National Park Wine Collection," for which she said there "was no adverse reaction from the public." She added that "the waiver permitting the Budweiser partnership carefully builds on that past successful partnership."

When the deal was announced on April 22, the brewer promoted it as helping to raise awareness of the national parks, while teasing an "epic surprise concert" this summer.

The Whatever problem
What is potentially more troublesome for Bud Light is that the label backlash is occurring one month before its "Whatever, USA," event, which is a signature marketing execution for the broader "Up for Whatever Campaign." The event amounts to a town takeover that this year will be held on Catalina Island, Calif., from May 29-31. Fans can win a trip to the island, which will essentially be used for a heavily branded Bud Light party.

In a statement posted across Bud Light social media channels Wednesday night, the brand stated that "No means no. We missed the mark and apologize. We've stopped producing this label." In his statement, Mr. Lambrecht referenced the Catalina event, saying "we're actively preparing for a responsible, fun and successful event."

A key strategy for the "Up for Whatever" campaign is to link experiential and digital marketing. The idea is that attendees at events like "Whatever, USA" will fill social media with fun posts and pictures that will be promoted by the brand and shared across the web. At last year's event -- held in Crested Butte, Colo. -- some 37,000 pieces of content were created, including thousands of pieces of user-generated content shared over social media, reaching 15 million consumers, the brewer stated last year.

But in the wake of the bottle gaffe, consumers seem more willing to bash rather than boost Bud Light on social media. And if the mood does not change, the brewer risks having some of its "Whatever, USA" posts hijacked by critics.

"When you are one these massive, big brands, everyone is watching every move you make and will throw a rock at you if you trip and fail," said a former A-B InBev employee who requested anonymity. "Every step you make you have to double check and double check again, because you are the category leader. You make one bad move and you are going to be jumped on."

The incident has certainly gained attention: There were 45,600 tweets about Bud Light from 12 a.m. on April 28 through 12 p.m.on April 30, compared with 3,900 tweets during the same period last week, according to ListenFirst, a data and analytics company.

One popular saying on Twitter described Bud Light as "the official beer of rape culture."

Other tweets were more subtle, but equally damaging for a brand trying to win over millennial consumers.

For instance, from Tuesday morning through Thursday early afternoon, more than 1,740 tweets linked Bud Light with the phrase "has no chill," according to social intelligence company Wayin. The phrase basically means someone or something has lost their cool, or as the Urban Dictionary defines it: "People who have 'no chill' or who have lost their 'chill' have effectively lost their ability to act in a rational manner."

But some Bud Light fans have rushed to the brand's defense. "Sorry America is too sensitive and just assumes the worse out of everything now," one commenter stated on the Bud Light Facebook page.

Still, industry experts remain baffled as to how the bottle message got approved in the first place. The slogan was among 140 different sayings printed on bottles as part of the brand's "Up For Whatever" campaign. Most of them are trivial, like "the perfect beer for when you're eating breakfast meats outside of breakfast hours."

But the label in question seemed destined to draw negative attention and should have been caught by someone at the brewer or Bud Light's ad agency, BBDO, according to industry experts.

"I can see that A-B was talking about 'No' meaning not saying no to new experiences, not in a sexual context," Harry Schuhmacher, editor and publisher of trade publication Beer Business Daily, stated in a report to subscribers. "But the issue of date rape is front and center right now, and it's completely inconceivable to me that nobody in the vast organization of A-B, including their ad agencies, didn't see that this message could be misconstrued in a sexual context and give it the nix. Are they not reading anything in the popular press?"

BBDO creates the bottle messages, according to A-B InBev. The agency has declined to comment. The copy also was subject to an internal review by the brewer, according to internal procedures calling for oversight by multiple functions, including marketing, legal and corporate social responsibility, which includes men and women.

"We have an extensive review process and this label should not have made it through," a spokeswoman told Ad Age earlier this week. "It's regrettable."