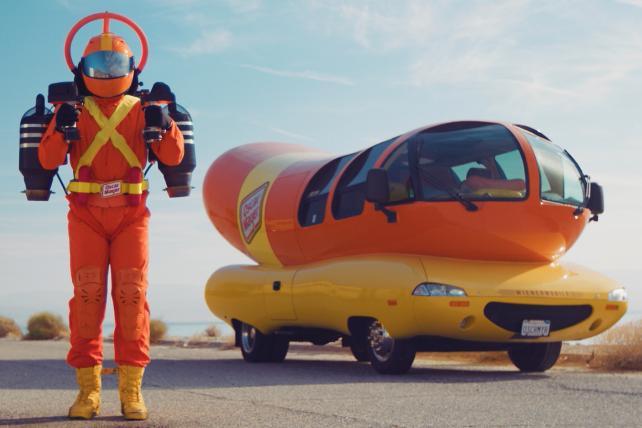 It's a bird. It's a plane. It's the ... Super Hotdogger, Oscar Mayer's new addition to its Weinerfleet.

The Super Hotdogger, described by Oscar Mayer as a "jetpack-powered hotdog hero," joins the classic Weinermobile in the Oscar Mayer fleet, which now also includes the WeinerDrone, WeinerCycle, Weinermobile Mini and Weiner Rover. (That might be an Ad Age record for the number of weiners used in one sentence.)

This addition to the "fleet," however, is a jet-pack equipped human in an Oscar Mayer suit carrying two hotdogs. With mustard.

In a push to promote its hotdog products and recipes, the lunchmeat maker has been adding to the fleet in recent years. Last year, the cold cuts company announced it was removing nitrates—except those naturally occurring in celery juice—from its hotdogs, along with animal by-products and artificial preservatives. Today's launch was to hype a new line of 100 percent pork and 100 percent chicken hot dogs, released earlier this year.

"Consumers were asking for cleaner product lines, so we wanted to give them what they want," says Matt Riezman, brand manager for Oscar Mayer.

The launch marks the start of a season that hotdog marketers relish. Starting around Memorial Day, there is an annual hike of sales—approximately 40 percent of all hotdogs are sold during Memorial Day and Labor Day, says Riezman. This summer is shaping up to be better than previous years, judging by Memorial Day numbers. Riezman cites a sales increase "in the high single digits" and a market share growth of one point.

And this summer is shaping up to be better than previous years, judging by Memorial Day numbers, claims Oscar Mayer.

"People are definitely eating more hotdogs this year than in past years," Riezman says, who, naturally, chalks this up to the higher-quality options Oscar Mayer is offering. (Rivals might disagree.)

"But don't spend a lot of time searching the skies for the Super Hotdogger in towns across America—the next time it'll be in action will be in Chicago in July. Like the rest of the Weinerfleet, it only comes out at special occasions like Monday's unveiling. The Hotdogger's flight lasted only about five minutes over New York's East River, to the amazement and slight disappointment of the hotdog-hungry crowd below.

Ask a Hotdogger (a highly trained, college-age Weinermobile driver) how the event went, though, and you will receive this on-brand response: "Weinerful, frank you for asking!"