‘Women belong in the kitchen’ line, without the full ad’s context, comes off as sexist
READ THIS NEXT
Tinder poaches Pizza Hut's CMO George Felix 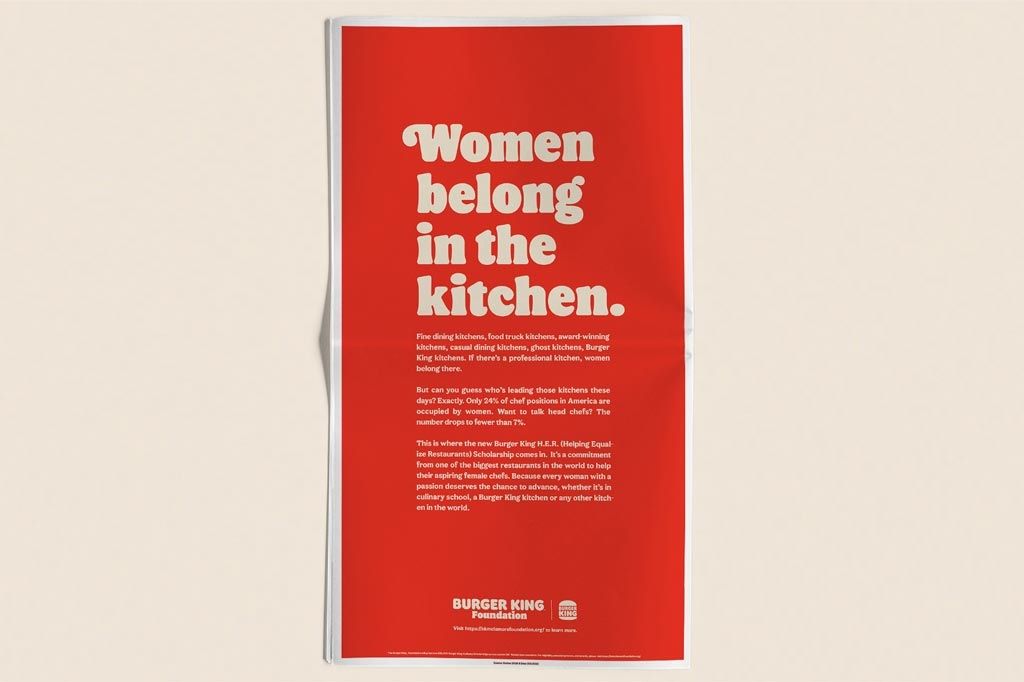 This story has been updated to reflect news from throughout the day.

Burger King's decision to play on the phrase “women belong in the kitchen” in a tweet meant to promote scholarships for culinary education backfired on Monday, leading the brand to later delete a tweet from its Burger King UK account that was misinterpreted worldwide as an International Women’s Day effort that missed the mark.

A full-page ad running in The New York Times shows the line in large font and follows with several lines that explain the idea behind Burger King H.E.R. (Helping Equalize Restaurants) scholarship, including the low representation of women in chef and head chef roles across the industry. On Twitter, however, the usage of the line was quickly misconstrued. Burger King U.K. tweeted out just the line “Women belong in the kitchen” on Monday morning, and it was only in subsequent tweets that the intended meaning was explained.

Later on March 8, Burger King U.K. deleted the tweet, and explained its reasoning in a separate Twitter post. "We hear you. We got our initial tweet wrong and we’re sorry," it began in one tweet. A second tweet read: "We decided to delete the original tweet after our apology. It was brought to our attention that there were abusive comments in the thread and we don't want to leave the space open for that."

The campaign comes from David Miami.

We hear you. We got our initial tweet wrong and we’re sorry. Our aim was to draw attention to the fact that only 20% of professional chefs in UK kitchens are women and to help change that by awarding culinary scholarships. We will do better next time.

Reactions on social media showed that many people were disappointed by the brand's choice of language. Burger King is often outspoken in its marketing and uses some snark in some of its social media posts. But the backlash to the attempt at flipping the intention of "women belong in the kitchen" shows the risk of getting too playful with social media marketing, especially when many viewers see messages in isolation, and not as part of a broader campaign. Burger King saw more than 251,000 mentions before 12:30 pm ET, nearly as many of the 323,000 mentions it has seen in the past two weeks with sentiment skewing towards negative, with perhaps surprisingly 71% of the mentions coming from men, according to analytics firm BrandTotal.

"There’s a fine line between edgy and inappropriate or dangerous to your own reputation today. That line is constantly shifting, and brands need to weigh the potential cost of going too far against the benefits of more views, clicks, and shares from their marketing attempts," says Erik Bernstein, president at Bernstein Crisis Management. "In this case, I believe Burger King is going to see a negative ROI."

Women belong in the kitchen.

“We are committed to helping women break through a male-dominated culinary culture in the world’s fine dining restaurants – and sometimes that requires drawing attention to the problem we’re trying to help fix," Burger King wrote in a statement. "Our tweet in the UK today was designed to draw attention to the fact that only a small percentage of chefs and head chefs are women. It was our mistake to not include the full explanation in our initial tweet and have adjusted our activity moving forward because we’re sure that when people read the entirety of our commitment, they will share our belief in this important opportunity."

Only 24% of chef positions in US are occupied by women.

That’s why the BK Foundation launched a culinary scholarship program to bring more women to leadership positions in the industry.

Women belong in the kitchen if they want to work there. And hopefully in leadership roles. pic.twitter.com/ITwnTJQpDp

Still, the Burger King UK tweet was the one garnering much more attention.

Below, some of the social media reaction.

Shoutout to Burger King for absolutely fucking what could have been a fabulous pro-women tweet because they couldn't stop themselves making an outdated joke often used by men.

burger king after tweeting "women belong in the kitchen" pic.twitter.com/S71PuqmDr2

How did Burger King think THAT was a good marketing idea? Like they tried that stupid “donating to streamers” thing that was awful, and now this? They need a whole new marketing team, cause that was so tone deaf it hurt

My guess is the Burger King UK Tweet was originally conceived as the print ad on the left and forced to work as a Twitter thread on the right.
I’m still not crazy about the print ad, but it’s a bit better.
Further proof that print and social require different strategies & content pic.twitter.com/v1C3d0C7IA

Bad day for the royal family, especially the Burger King