King Graces NY Post and Other Papers To Promote the Whopper of Hot Dogs
READ THIS NEXT
Discord’s new CMO discusses racism, rebranding—and a more-vibrant 'blurple'

It's official: The newspaper industry has gone to the dogs. The hot dogs. 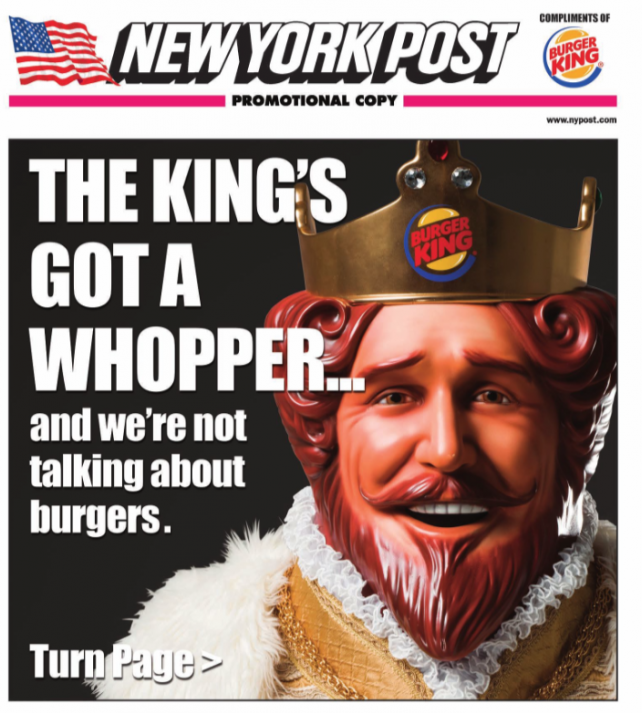 Burger King is taking out full-page cover ads Tuesday featuring its king character to promote its new Grilled Dogs. The latest addition to the chain's permanent lineup was announced earlier this month and officially launches Feb. 23.

Burger King plans to cover the NY Post, NY Daily News, Chicago RedEye, Metro Philly, San Francisco Examiner, Houston Chronicle and Express DC with its advertising. The text next to the king character reads: "THE KING'S GOT A WHOPPER… and we're not talking about burgers."

The print marketing is the latest way Burger King is trying to spread the word about what Burger King North America President Alex Macedo described as "the Whopper of hot dogs" during a launch event.

Other elements of the promotional push have included comical training videos starring Snoop Dogg and Charo and a line of hot dog emojis. This is the first time in recent memory the chain has run a major print push. Agencies involved in the project include Horizon, Code and Theory and Alison Brod Public Relations.

Earlier this month, Mr. Macedo declined to disclose total ad spending for the campaign, but said it was the most significant since he joined Burger King five years ago. According to the Ad Age Datacenter, Burger King spent $371 million on marketing in 2014.

Other chains have already tried to capitalize on the BK Grilled Dogs launch. On Monday, 7-Eleven promoted the fact that it does not charge extra for chili and cheese. One of its tweets included the line "Don't let a King charge for freedom."

Don't let a King charge for freedom. Get a Big Bite w/ FREE chili and cheese and fight for #HotDogDemocracy! pic.twitter.com/nKYMwn3ArY

Soon after Burger King first announced the product, Chicago-area chain Portillo's also promoted itself via Twitter and its site using a King reference.

Attention, America: When it comes to hot dogs, Portillo's is King: https://t.co/4iREMU0o9j