Best Buy's showrooming strategy is likely paying off through increased store traffic but more could be done to encourage shoppers to actually buy its products, new research based on social-media data suggests.

Best Buy in late October launched its first specific showrooming campaign via a spate of ads featuring actors Will Arnett, Maya Rudolph, Jason Schwartzman and LL Cool J. At the time, the company said it hoped to show consumers there is a better way to research and buy electronics via its "low price guarantee" and the ability to order online and pick up in store. 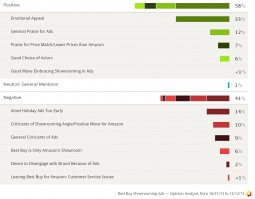 Jehan Hamedi, global market development manager at Crimson Hexagon, a social-media analytics company that analyzed Twitter and Facebook data from 16,500 online consumer opinions from Oct. 21 to Dec. 12 on Best Buy, said his company fround creative aspects of Best Buy's showrooming campaign resonate well with consumers with positive sentiment outweighing the negative. However, he said it's understanding what drives consumers to buy that is the most relevant and said that 10% of surveyed consumers said the showrooming strategy actually gives Amazon the benefit. (Neither Amazon nor Best Buy is a Crimson Hexagon client.)

The social-listening company's findings follow an analysis of 1.5 million online consumer discussions about the retailer and its competitor Amazon.com completed last year.

"They're [consumers are] telling us that Best Buy is where they go to look at merchandise and then they go buy it online later," said Mr. Hamedi. "What consumers are not shy about telling us is why they showroom, when they do it and the connection to a named competitor, and that's Amazon."

Mr. Hamedi pointed out one specific tweet from early December that perhaps sums up part of the Twitter conversation, from @NickSilicon: "Dear Best Buy, I'm glad you know your place as a showroom. Love, Everyone who shops at Amazon."

Its conclusion from the findings is that Best Buy can do more to convert foot traffic into sales by making the customer experience more interactive. He said that Best Buy is not monetizing on the fact that its stores are seen as a destination. "That's a very unique appeal to them….What if you created something memorable that exceeds [consumers'] expectations?" Mr. Hamedi said.

Social gratification
Some of the things Crimson Hexagon suggests Best Buy could do include making the stores more of a "playground" destination with fun in-store events, group discounts, and refer-a-friend programs. "There's such a huge opportunity for them to link their product showroom appeal with a social experience," he said.

Naturally consumer expectations vary when walking into a Best Buy store, but "we found that the largest, the prime [consumer] expectations, had nothing to do with what I might expect, like touching or sampling the product. It's more about social gratification—having fun. You go with your friends and they are your pre-purchasing sounding boards. It's a destination," Mr. Hamedi said.

Other findings from Crimson Hexagon's analysis show that one-third of consumers relate to the showrooming campaign's humor, while 6% loved the actors used. However, only 1% said embracing showrooming is a good move.

The results of $45.1 billion Best Buy's showrooming strategy won't be evident until it reports fourth-quarter earnings early next year. Analysts expect Best Buy to earn $1.61 a share, which would compare with $1.55 a year ago, according to Yahoo Finance.

Following several years of flat to down full-year revenues and net losses in fiscal years 2012 and 2013, Best Buy is in the midst of its "Renew Blue" strategy, launched in November 2012. Goals include reinvigorating the consumer experience, boosting multi-channel shopping, investing in physical stores, beefing up membership programs, and identifying cost savings, among many other aspects.

Shopper conversion
In the most recent third quarter ended Nov. 2, Best Buy reported a slight decline in total revenues to $9.36 billion from $9.38 billion a year ago; comparable-store sales, however, increased 0.3% compared with a decline of 5.1% the prior year, and the company swung to a third-quarter profit of 16 cents a share versus a year-ago loss of 3 cents.

"It's all about [shopper buying] conversion at the end of the day," said analyst Kate McShane of Citigroup in a recent interview. "We never thought showrooming was necessarily a bad thing. That means there's a chance to convert [shoppers]. It sounds like Best Buy is doing that."

Nevertheless, Best Buy warned during the third-quarter conference call that gross margins in the holiday fourth quarter will likely be pressured given the generally promotional environment of Black Friday and holiday. "If our competition is, in fact, more promotional in the fourth quarter, we will be too, and that will have a negative impact on our gross margin," said Best Buy Chief Financial Officer Sharon McCollam on the call held in mid-November.

"It's still a tough category at the end of the day," said McShane. "This is not a gross margin expansion story. [Consumer electronics] is a competitive category."

Context is king
As for Crimson Hexagon's research, collecting information via "the world's largest focus group," a.k.a. social media, is not exactly a new strategy. Nevertheless, it allows companies to hear directly from consumers what they want, Mr. Hamedi said, which he calls "social intelligence." What companies actually do with that information is the key. The Boston-based company's clients include Walgreens, Starbucks, Samsung, Twitter and Paramount Pictures.

Said Mr. Hamedi: "People say that content is king. But, really, with social media, context is king. It's understanding how and why consumers are doing something, to understand the context in which purchase decisions are made. And to use it in the correct business context in your organization."